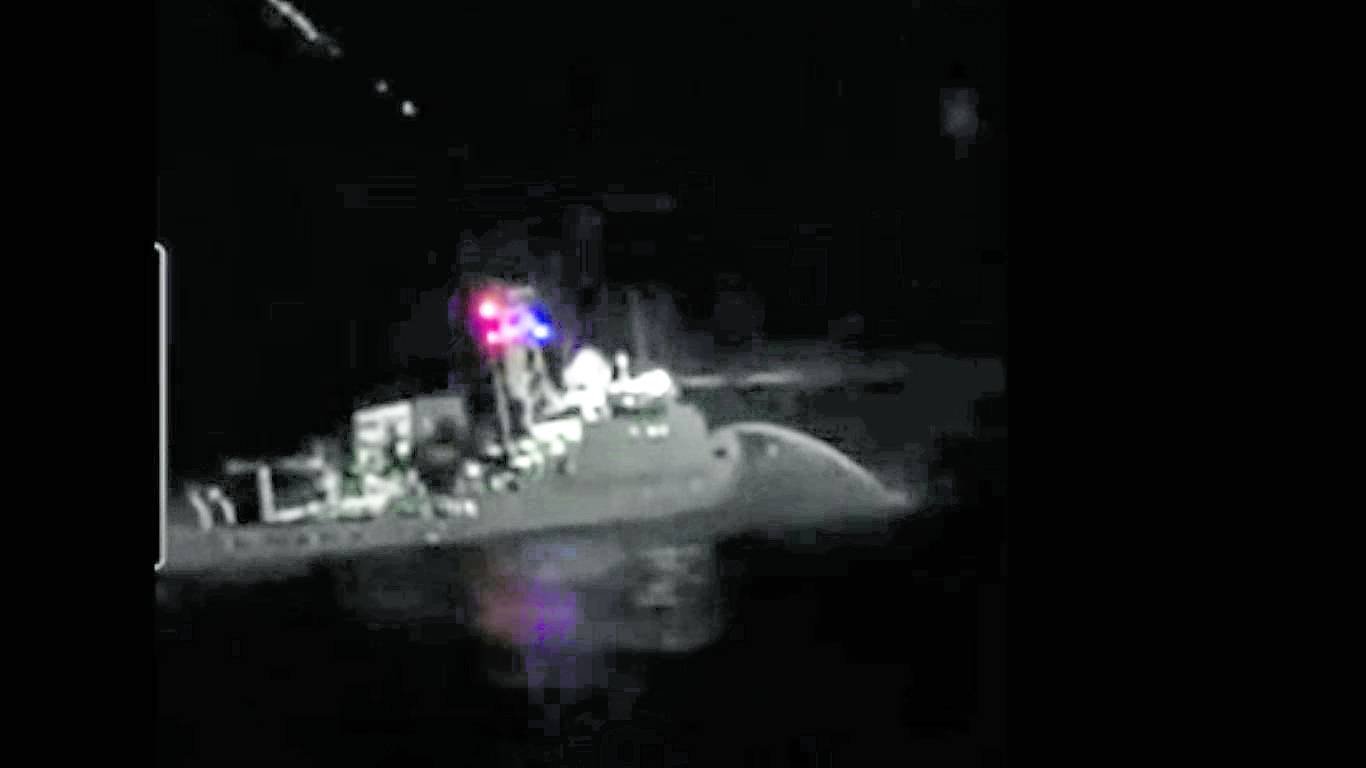 NIGHT ATTACK A blurry image from a cell phone camera of one of the crew members of a Filipino boat shows the Chinese Coast Guard ship that blasted them with a water cannon on Tuesday night to prevent them from bringing supplies to troops on the rusted BRP Sierra Madre, which serves as a Philippine outpost at Ayungin (Second Thomas) Shoal west of Palawan province. No one was injured in the attack. —VIDEO GRAB

MANILA, Philippines — The government on Thursday expressed outrage against China’s coast guard whose ships blocked and blasted with powerful jets of water two Filipino vessels carrying food and other supplies for a Marine detachment at a shoal in the West Philippine Sea.

“Fortunately, no one was hurt; but our boats had to abort their resupply mission,” Foreign Secretary Teodoro Locsin Jr. said in a statement on the Tuesday night incident which involved three Chinese Coast Guard ships near Ayungin (Second Thomas) Shoal.

He said he conveyed “in the strongest terms” the Philippine government’s “outrage, condemnation and protest” to Chinese Ambassador Huang Xilian and to China’s foreign ministry and demanded their ships to “back off.”

The Marine detachment is aboard the BRP Sierra Madre, a World War II-era ship that was intentionally grounded on the shallow waters of the shoal, about 260 kilometers west of Palawan’s Quezon town, in 1999. That was four years after China occupied Panganiban (Mischief) Reef, about 37 kilometers northwest of Ayungin.

As a military ship still in active service and now serving as a maritime outpost, any attack on it would be considered an attack against the Philippines, which could also trigger a US response under the defense treaty.

An informant from the Western Command based in Palawan told the Inquirer that it was the first time that the Chinese have attacked Filipinos resupplying the Ayungin detachment with a water cannon normally used in fighting fires.

“Ayungin Shoal is part of the Kalayaan Island Group (KIG), which is an integral part of the Philippines, as well as the country’s exclusive economic zone and continental shelf over which the Philippines has sovereignty, sovereign rights and jurisdiction,” Locsin said.

“The acts of the Chinese Coast Guard vessels are illegal. China has no law enforcement rights in and around these areas. They must take heed and back off,” he said.

Locsin said the Chinese action was a “failure to exercise self-restraint” that threatened the “special relationship” between the two countries that was nurtured by President Duterte and President Xi Jinping.

He said the Philippines would continue to supply its troops at the shoal. “We do not ask permission to do what we need to do in our territory,” Locsin said.

Malacañang was largely reticent on the incident, issuing a brief statement that cited the protest filed by the Department of Foreign Affairs.

“As we have said in the past, we will continue to assert our sovereignty, sovereign rights, and jurisdiction over our territory,” said acting presidential spokesperson Karlo Nograles.

Locsin’s predecessor, Albert del Rosario, said the attack on the boats was a clear violation of international law.

“It is an affront to Philippine sovereign rights over its continental shelf,” Del Rosario said in a statement.

Del Rosario reiterated his proposal for a joint Philippines-US patrol of the West Philippine Sea.

National Security Adviser Hermogenes Esperon Jr. told reporters that two of the Chinese ships blocked the Filipino wood-hulled vessels and the third used a water cannon to blast the two boats for one hour.

He said the Filipinos were forced to turn back after the outrigger of one of their boats was damaged.

A cell phone video shot from one of the Filipino vessels showed the encounter in the dark. The Chinese vessel’s spotlight was at one point beamed directly at the person recording the scene and partly illuminated the jets of water from its water cannon.

“We will now go back,” said one of the Filipinos speaking in English, apparently telling the Chinese that the boats would be withdrawing.

The boats were about 13 km away from Ayungin at the time, according to the military.

The Philippines has not used either a naval vessel or a coast guard ship to resupply the detachment to avoid any confrontation with the Chinese, using only small civilian boats that could navigate the shoal’s shallow waters to reach the Sierra Madre. The military has also dropped supplies from a plane on the water close to the ship.

A senior military official, who spoke on condition of anonymity for lack of authority to speak to the media, said the two boats were also carrying workers who were to make repairs on the rusted ship.

Esperon, chair of the National Task Force for the West Philippine Sea, also reported on Wednesday the “unusual presence” of Chinese maritime militia vessels at the shoal.

“Usually there were only two Chinese maritime militia (ships) but last week there were 19,” he said.

At Pag-asa (Thitu), the biggest island in the KIG occupied by Filipinos, there was “a record number” of 45 ships from less than 20 in the past.

“So, they’re very aggressive,” he said.

Tensions over the resource-rich waters spiked early this year after hundreds of Chinese maritime militia vessels were detected at Whitsun Reef, which is claimed by both China and the Philippines.

China claims almost all of the South China Sea, including the West Philippines Sea, through which trillions of dollars in trade passes annually, with competing claims from Brunei, Malaysia, the Philippines, Taiwan and Vietnam.

The waters have valuable fishing grounds and are believed to sit atop vast oil and gas deposits.

Beijing has ignored the 2016 tribunal ruling that invalidated its historical claim over most of the waters. —WITH REPORTS FROM ROMAR MIRANDA, JEROME ANING AND AFP