DFA warns vs travel to Ethiopia amid escalating tension in Tigray 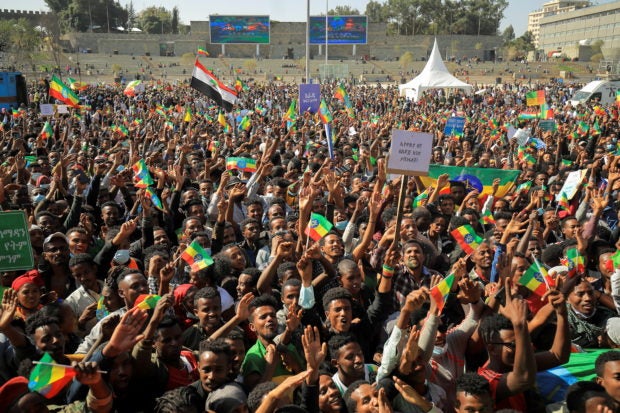 Civilians attend a pro-government rally to denounce what the organizers say is the Tigray People’s Liberation Front (TPLF) and the Western countries’ interference in internal affairs of the country, at Meskel Square in Addis Ababa, Ethiopia, November 7, 2021. REUTERS/Tiksa Negeri

MANILA, Philippines — The Department of Foreign Affairs (DFA) on Thursday raised the alert level in Ethiopia to Level 4 amid the escalating conflict in the Tigray region.

“The DFA is advising all Filipinos not to travel to Ethiopia at this time due to ongoing conflict in Tigray and other neighboring regions,” said the DFA in an advisory on Thursday.

“Filipinos who are in the country where Alert Level 4 is in effect are advised to restrict non- essential movements, avoid public places, and immediately prepare for evacuation,” it added.

According to the DFA, Alert Level 4 is raised when there is large-scale internal conflict or full-blown external attack. The Philippine Government then undertakes mandatory evacuation procedures during this level.

The DFA said that as of December 2020, the total estimated number of Filipinos in Ethiopia amounts to 800.

Filipinos in need of assistance are advised to contact the Philippine Embassy in Cairo, Egypt through telephone numbers (+202) 252-13062 or through its Facebook Page.

Ethiopia has been under a civil conflict between the Ethiopian government forces and the Tigray Defense Forces since November, 2020, after Ethiopia Prime Minister Abiy Ahmed ordered a military offensive against regional forces in Tigray.