MANILA, Philippines—The Philippine military is seeking to boost its arsenal with equipment from South Korea.

A team of defense and military officers was in South Korea last week for a joint visual inspection of used rocket systems and a surplus warship that will be handed over by the Seoul government, security officials familiar with the matter told INQUIRER.net.

A team of defense and military officers was in South Korea in early November for a joint visual inspection of used rocket systems and an anti-submarine warship offered by the Seoul government. CONTRIBUTED PHOTO

The Philippine Army and Philippine Marine Corps are likely to be recipients of 22 Kooryong multiple launch rocket systems from the Korean Army. These would include equipment and ammunition. These were expected to be handed over to the Philippines in the next few months though this was first publicly announced in 2019.

Philippine Navy representatives examined the decommissioned Pohang-class corvette ROKS Andong (PCC-771) at the Jinhae naval base in South Korea. It was found to be in “good operating condition.”

If the transfer pushes through, the vessel will be the Philippines’ second donated ship by South Korea, which two years ago handed over a second-hand Pohang-class corvette ROKS Chungju (PCC-762), now called BRP Conrado Yap (PS-39). 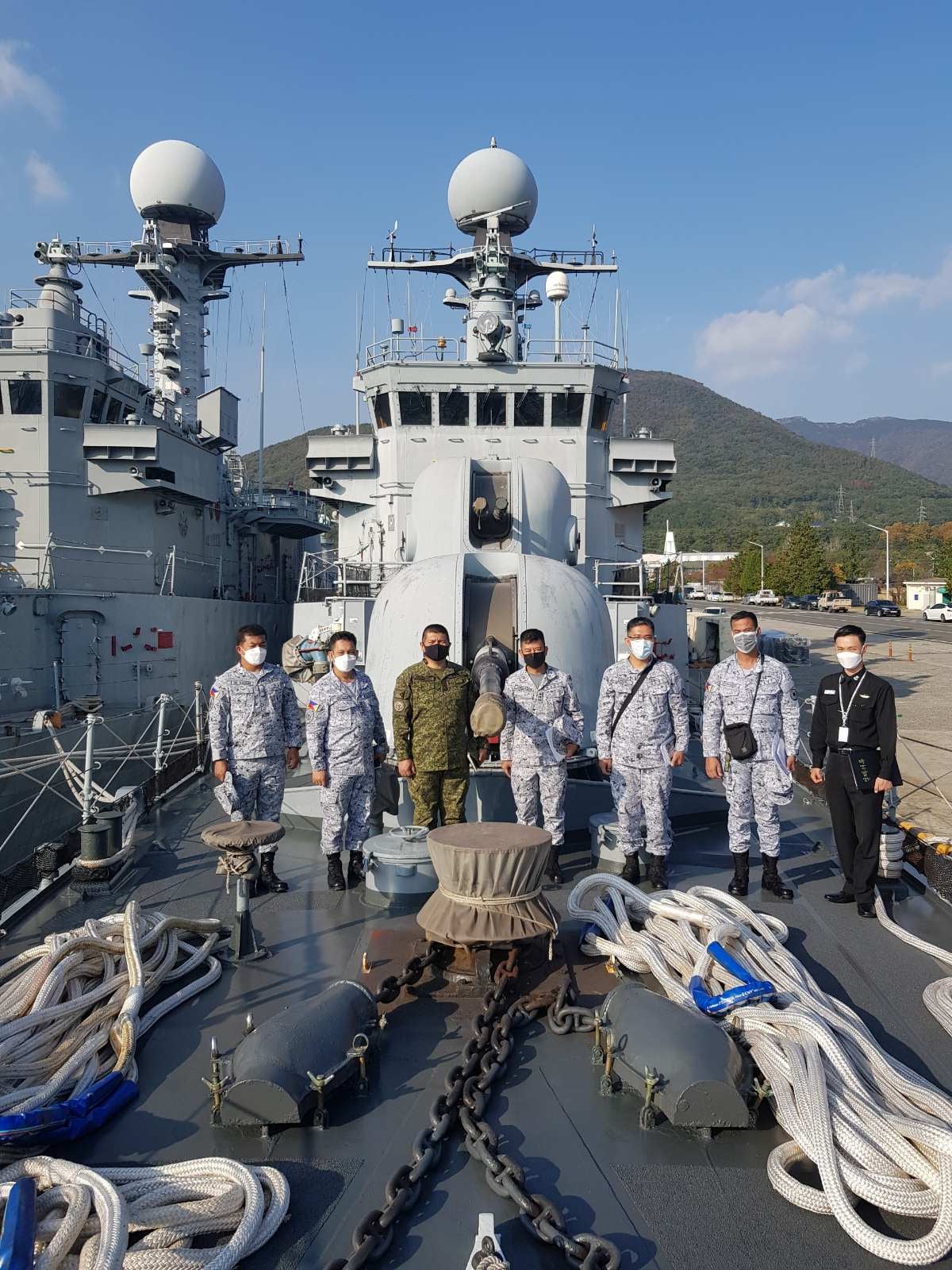 A team of defense and military officers was in South Korea in early November for a joint visual inspection of used rocket systems and an anti-submarine warship offered by the Seoul government. CONTRIBUTED PHOTO

Manila and Seoul’s security ties have flourished through the years after it was cemented by the Philippine deployment of troops during the Korean war in the 1950s.

South Korea has been a major source of military hardware for the Philippines— from military trucks to light fighters. In the past year, Hyundai Heavy Industries delivered two Rizal-class frigates for the Philippine Navy worth P16 billion.

Korean firm Hanwha Systems, the once controversial supplier of the combat management systems for Rizal-class warships, is also in charge of upgrading the Navy’s Del Pilar-class vessels. Hanwha pledged in 2019 to donate a simulator training center for the Navy.

The donation came ahead of an anticipated big-ticket procurement for a pair of brand new corvettes from South Korea’s HHI for P28 billion—a plan that has been announced since 2019 but it faced setbacks due to budgetary constraints and the pandemic.

HHI has been declared as the “single responsive offeror” for the Navy’s corvette acquisition project, in what could be one of its biggest procurements so far in efforts to modernize its fleet. These ships are envisioned to be more advanced than Rizal-class warships also built by HHI.

The Department of National Defense was expected to issue the notice of award to HHI in the coming weeks, once the special allocation release order is approved by the Department of Budget and Management.

A team of Navy personnel conducted a post qualification inspection in South Korea in October, following the conclusion of negotiations with HHI.

The Philippines, an archipelagic state with one of the world’s longest coastlines and most islands, faces an array of maritime security challenges, ranging from the West Philippine Sea dispute to the intrusion of foreign ships, mostly Chinese.

The ill-equipped Philippine armed forces, one of the weakest in the region, has been trying to upgrade its capabilities in recent years with its meager budget.

As the Navy pivots to more capable ships, it appears bent to go ahead with its plan to retire vintage vessels, even without immediate replacements, INQUIRER.net learned.

The BRP Miguel Malvar (PS-19), the Navy’s most decorated vessel, along with BRP Magat Salamat (PS-20) and BRP Mangyan (AS-71), will be decommissioned sometime next month as part of the Navy’s phase out plan. These ships were originally built for the US military in the 1940s and saw action during World War 2 before they were commissioned by the Philippines.

BRP Gregorio del Pilar, a former US Coast Guard Hamilton-class cutter and the lead ship of Del Pilar-class vessels, will return to service in December. It underwent repair and upgrades after it ran aground in the West Philippine Sea while on routine patrol in 2018.