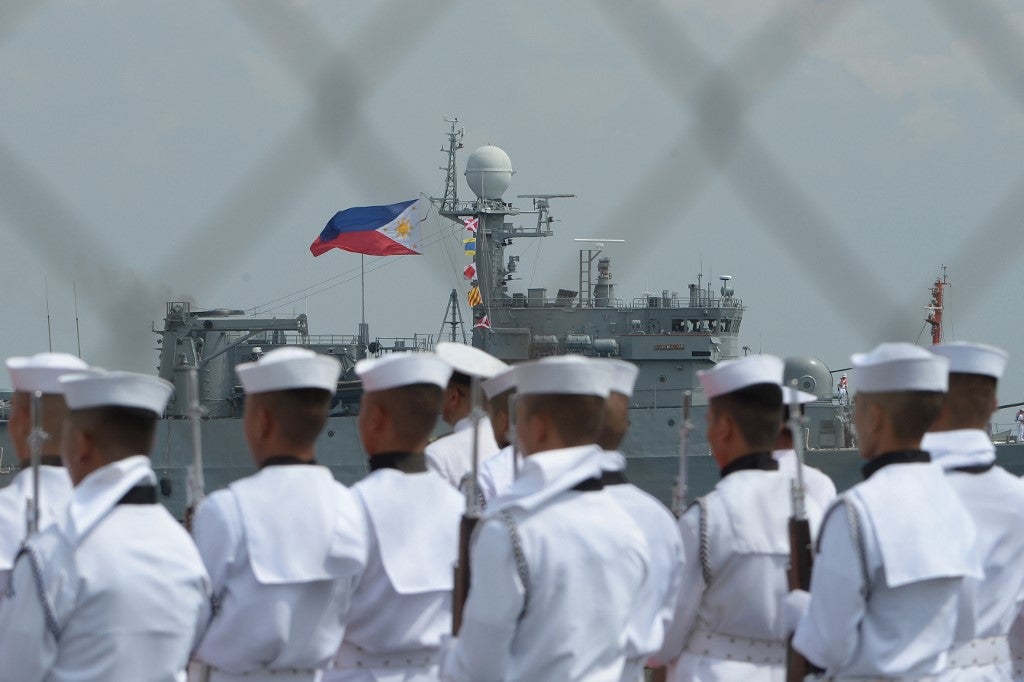 Philippine Navy sailors stand in formation as their newly-acquired vessel, the Pohang-class corvette BRP Conrado Yap (PS39), prepares to dock at the international port in Manila on August 20, 2019. – The newly-acquired vessel from South Korea, measuring some 88.3 meters with a maximum speed of 32 knots, is capable of anti-submarine warfare equipped with sonar, torpedo launchers and depth charges. (Photo by TED ALJIBE / AFP)

MANILA, Philippines — The Philippines is planning to purchase two brand new corvettes from South Korea, as it seeks to boost the Philippine Navy’s capabilities in the face of China’s creeping expansion in the South China Sea.

Defense Secretary Delfin Lorenzana made the announcement during the welcome ceremony for the Navy’s newly-acquired ship, BRP Conrado Yap (PS-39), a former Pohang-class vessel that served the Republic of Korea Navy for 30 years.

“We are again ordering two corvettes, also to be made by Hyundai,” he said in his speech at the event held at Manila South Harbor early this week.

Lorenzana was referring to South Korea’s Hyundai Heavy Industries (HHI), one of the world’s largest shipbuilders. It is currently constructing the Navy’s two missile-capable frigates set to be delivered by 2020 and 2021.

“The Navy has recommended that HHI also builds its two corvettes for compatibility of systems and weapons inasmuch as it’s already building our two frigates,” Lorenzana told Inquirer.net in a separate message.

The Philippine government signed a contract with HHI in 2016 to buy two brand new frigates worth P16 billion.

The upcoming frigates attracted public interest in late 2017 after a conflict in the selection of the combat management systems (CMS), considered as the “brain” of the warships.

The disagreements stemmed from the failure of the shipbuilder to meet the original preference of CMS by the Philippine Navy’s technical working group.

At a proposed budget of P14 billion each, the corvettes would be more expensive than the anticipated missile-capable warships.

The scheme of procurement to acquire the corvettes would likely be government-to-government (G2G).

“The Philippine Navy recommends a G2G mode. We are still going through the procurement process,” Lorenzana said.

Duterte approved the corvette acquisition program (CAP) a few months ago, according to a memo from the Office of the President dated May 10, 2019.

The Navy presented the CAP during a command conference in Malacañang on May 7, “based on the unsolicited proposal of HHI,” read the document seen by Inquirer.net.

“The President approved the Philippine Navy’s recommendation to prioritize the acquisition of two Philippine Navy corvettes under G2G procurement with Republic of Korea, subject to compliance with relevant laws, rules and regulations,” the memo read.

The Armed Forces of the Philippines has already sent a request for the funds for the two corvettes in early August thru the Department of National Defense.

The ships will be paid through multi-year obligation authority, outside the annual funds from the AFP modernization program.

The underfunded Philippine Navy is beefing up its capabilities to enhance the security of the archipelago and keep up with its neighbors in the region. The Philippines is facing several security challenges ranging from maritime disputes with neighbors over the South China Sea to insurgency and terrorism.

“We really need ships to guard our maritime domain. And we look forward to the day when we can have ships all over the country to protect our interests,” Lorenzana said.

The BRP Conrado Yap, currently the Navy’s most capable warship, will serve as a transition platform until the new assets would be delivered.

Empedrad said they are looking forward to receiving two more ships of the same type from the Korean government.

“They have an initial commitment to add two more Pohangs because they know we usually operate three ships of any type to form a squadron. I requested if they can add more, and there was a positive response,” he said. /kga