In reply to media queries seeking reaction to DA MC# 23 which expands coverage of MAV Plus, the Philippine Association of Meat Processors Inc. (PAMPI) issued the following statement:

MC #23 is an exercise in futility and will not address the unabated high prices of pork which alarmed NEDA last Monday (Oct. 25).

The  high prices of meat products which the government has miserably failed to address is due to dysfunctional policies of the department of agriculture which misled economic managers in the executive department.

The DA had recommended the expansion of MAV and reduction of pork tariffs without notifying other gov’t agencies that the imported pork cannot be sold in wet markets unless they are displayed in freezers and kept at a temperature of minus 18 degrees Celsius.

Stall owners in wet markets do not have freezers. They barely have enough capital to pay for  daily deliveries of fresh pork. So how can they sell imported pork even if they are priced cheaper?

On the other hand, importers/traders who fell for the reduced tariff incentive cannot move their imported pork to the wet markets, incurring unnecessary storage cost because the NMIS of the DA has threatened to confiscate them.

As a result,  imported pork products are tied up  in cold storages which according to DA, totalled about 80 million  kgs. or about 3 times more than the normal pre-pandemic monthly  inventory as of end September.

PAMPI had previously recommended that to bring pork prices down, DA should temporarily suspend the implementation of a controversial policy which bans the sale of frozen meat products  in  wet markets under  DA AO #6 issued in 2012.

Furthermore, PAMPI pointed out that there is no logic in banning the sale of  frozen meat  but allowing imported frozen galunggong to be sold in wet markets. 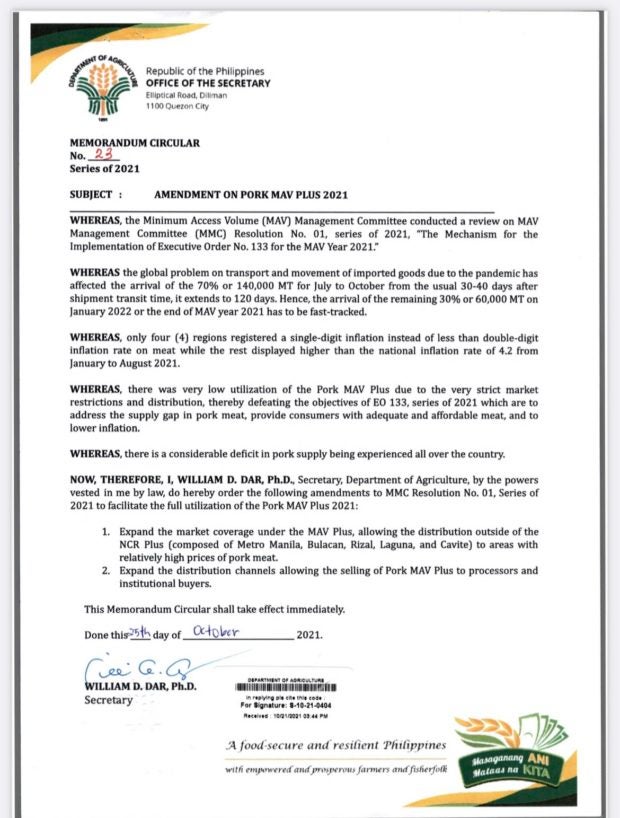