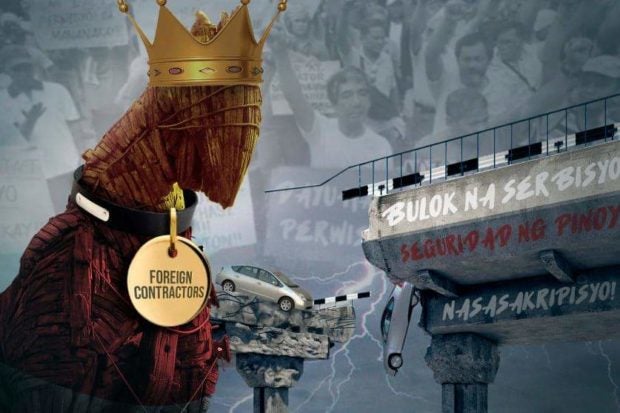 Fiery shots have been thrown at the Department of Health (DOH) and the Procurement Service of the Department of Budget and Management (PS-DBM) for their alleged preference of a Chinese-owned company, Pharmally, to supply personal protective equipment (PPE) worth over P8 billion. Aside from the suspected overpricing, critics claim that the project should have helped in the creation of jobs for more Filipinos and made the country self-sufficient in the sourcing of PPEs, if only the contract was awarded to a Filipino company. It could have been another inspiring Filipino story of bayanihan amidst the COVID-19 pandemic.

In the Philippines, it is common to have foreign contractors behind a government project. In fact, the Government Procurement Policy Board in its guidelines in the determination of eligibility of foreign suppliers, allows foreign entities to participate in state-initiated projects considering the principles of economic exchange and expansion of trade and exports with other countries based on equality and reciprocity. This initiative also ensures the prohibition or regulation of monopolies and other situations that restrain trade and fair competition.

Over the years, there have been several controversial government projects that were awarded to foreign consortiums. Some of these did not even continue due to multiple irregularities at the onset. As an example, the infamous $329-million National Broadband Network (NBN) Deal of the Philippine government and China’s ZTE Corporation in 2007, which was intended to install a telecommunications network linking government offices across the country, was scrapped due to corruption allegations.

In September 2007, then-President Gloria Macapagal Arroyo suspended the NBN-ZTE Deal amidst congressional investigations on the alleged irregularities of the project, which was linked to her, her husband, Mike Arroyo, and former COMELEC chair Benjamin Abalos. Joey De Venecia, a cofounder of Amsterdam Holdings, Inc., who also participated in the bidding of the project, alleged that the deal was overpriced by about $130 million, and that Arroyo’s husband would get $70 million from the deal. In 2011, Arroyo was charged with graft and plunder for her role in the foiled project but was later acquitted by the Sandiganbayan.

Another service delivery project that is currently in hot water is the China-funded Kaliwa Dam. The Commission on Audit (COA) has noted that Metropolitan Waterworks and Sewerage System (MWSS) failed to submit proof to ensure the environmental viability of the project. Some critics also alleged that China-funded projects can potentially undermine the country’s sovereignty. In addition, the project would displace over 1,465 families of the Dumagat-Remontado indigenous peoples (IP) in Rizal and Quezon province.

Just recently, another foreign consortium was put in the spotlight, after the COA, in its 2020 Audit Observation Memorandum (AOM), has flagged the Land Transportation Office (LTO) for the delays in the implementation of the P3.4 billion DOTr Road Transportation IT Infrastructure Project – LTO Component A, which pertains to the Land Transportation Management System (LTMS). The said project was bagged by the Joint Venture Agreement (JVA) of Dermalog, Verzontal Builders, Inc., Family Planning Corp., and Microgenesis Software, Inc. in May 2018. Dermalog is a German IT company specializing in biometrics systems, not land transportation systems.

The COA said the project has been delayed for more than a year, but the audit body noted that LTO extended and changed the deadline in favor of the foreign contractor without a valid and justifiable reason. This delay has caused a great disadvantage to the government and burdened LTO’s clients.

During the House Committee on Appropriations’ deliberation on the 2022 budget of DOTr last September 15, Bagong Henerasyon Party-list Representative Bernadette Herrera-Dy expressed her dismay over Dermalog’s failure to comply with the scheduled timelines of the LTMS project.

She asserted that the government could terminate its contract with Dermalog since the terms are not met, citing the case of the Department of Information and Communications Technology (DICT), wherein it halted its contract with its foreign contractor due to delays in installing WiFi hotspots in the country. If this happens, the public would be at the losing end once again. How long should we wait for efficient public service just because of faulty foreign contractors?

It was also found out that Dermalog has been charged with an estafa case or the violation of Article 315 of the Revised Penal Code by its local partner for the LTMS project. According to Verzontal, Dermalog has failed to fully pay its 25 percent share despite repeated written demands. The German firm was also accused of concealing the real bid price of the project despite them being equal partners as indicated in the JVA.

Government projects are meant to improve the delivery of public service. While the participation of foreign contractors is healthy for the economy and in maintaining international relations, the government must strictly enforce its safeguards to ensure that these contractors are eligible, compliant, and most of all, qualified. Like a trojan horse that takes advantage when the gatekeepers are remiss in their duty to protect the interest of the people, the incompetence of a foreign contractor becomes a grave threat. Ineptness can cost lives, affect livelihoods, and stifle progress.