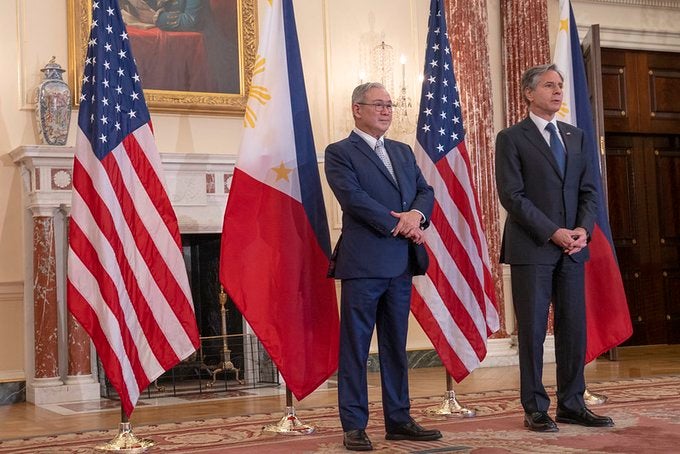 MANILA, Philippines — Philippine Foreign Affairs Secretary Teodoro Locsin Jr. and U.S. Secretary of State Antony Blinken engaged in a face-to-face meeting for the first time and discussed COVID-19 vaccination efforts, the importance of respecting international law in the South China Sea as well as human rights, among others.

Locsin met with Blinken on Thursday at the State Department in Washington.

Speaking before members of the media there, Locsin underscored the role of the U.S. in the Philippines’ response to the pandemic.

“It’s the first time I see Secretary Blinken face to face, I’m so happy, we’ve talked on the telephone at the height of the pandemic. The response of the United States has been one that galvanized the effort to fight the pandemic in the Philippines,” Locsin said, citing Washington’s vaccine donations to Manila.

“Of course our discussions have always been frank. We talked about specific issues, for example on how the United States had, in such a short period of time, vaccinated so many,” he added.

Locsin also said he gained insights on the U.S. vaccination drive in his discussion with Blinken.

“I must tell you that it’s a very good ritual, the credit goes to the American people and then oddly, the neighborhood pharmacist—he says that kind of trust is something that we—because our health system is very institutionalized—so then we have to gain the trust of the public but apparently the old American way does it better, the neighborhood,” Manila’s top diplomat said.

“And these insights I have gained, one among many, from the Secretary, and I bring them to my work and my President,” he added.

Blinken meanwhile underscored the over seven decades of alliance and diplomatic relations between the two countries.

Important meeting today with Philippine Secretary of Foreign Affairs @teddyboylocsin. On the 70th anniversary of the U.S.-Philippine alliance and the 75th anniversary of our diplomatic relations, we reaffirmed the strength and importance of our alliance. #FriendsPartnersAllies pic.twitter.com/2Yit8UpdFH

“This is not about looking backward it’s about but moving forwards, on the very important work we are doing together in so many different areas,” he said.

“We are very gratified to have the recent renewal of the Visiting Forces Agreement,” he said.

Further, the US official added that the two countries continue to stand “shoulder to shoulder in combating COVID-19 and looking at ways to build back better from the pandemic.”

“And of course the Philippines is a strong supporter of the rules-based international order including the freedom of navigation and we’ll certainly be talking about that, and many more things,” he added.

In a separate statement, US State Department spokesperson Ned Price provided an overview of Locsin and Blinken’s meeting in Washington.

“Secretary Blinken also underscored the importance of freedom of navigation and respect for international law in the South China Sea, and reiterated calls on the People’s Republic of China to abide by the 2016 arbitration ruling issued pursuant to the Law of the Sea Convention,” he said.