America in decline? Not to workers who keep coming here 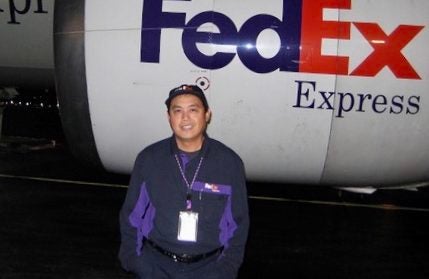 LIFE-CHANGING JOURNEY The author at work in the United States in 2004 as a courier for Federal Express. —CONTRIBUTED PHOTO

LOS ANGELES—The world is piling on America now. Some are cheering the ignominious images of a fallen empire departing in defeat from its longest war in Afghanistan. But a great multitude is still out there, wanting to come to work and live in this country.

With Labor Day this Monday (Tuesday in Manila) a part of that multitude who made it to America (my family included) will once again celebrate this life-changing journey, even as a raging pandemic continues to take precious lives every day.

While the rest of the world celebrate its workers on May 1 every year, the United States marks every first Monday of September as a holiday for its workers since 1894.

It is a day when workers pause to celebrate themselves in backyard barbecues and in parades where politicians pay paeans to the labor force and backbone of an economy that is, still—discounting the naysayers—the envy of the world.

It is also a day of gratitude for the 14 percent of us Filipinos who are part of the US workforce (per Bureau of Labor Statistics in 2019), third only to the Indians and the Chinese.

But the prospects of Filipinos coming to work and immigrate to the United States have again increased. Thanks in large part to the incoming Biden administration who overturned last January President Donald Trump’s visa quotas that restricted work authorization for information technology, nurses and other health workers.

To the Philippine ambassador to the United States, Jose Manuel “Babe” Romualdez, this gesture was America’s reward for the heroic work and sacrifice our Filipino nurses and doctors have done, fighting in the front lines against this pandemic, many of whom have died, and are still dying, in this epic battle of mankind versus the virus.

“Our immigrants have built this country, and we have a lot of Filipino Americans here that have been successful in all the fields,” remarked Romualdez last January.

To me, America in decline is an oxymoron. This notion is negated by the thousands of people around the world, lining up in American embassies for work and tourist visas, wanting to come to this country, a country that has now become my home and the home for millions of other immigrants.

One of those bashers

I have lived in America for 30 years now; two years more than the 28 years I have spent in my homeland, the Philippines. I have raised a family here, with two grown sons. And just like my father, I will probably die and be buried here.

I still remember my first paycheck in America, $9 in 1992 for an hour’s work, interviewing African Americans in Perry, Georgia, where I lived for five years.

Truth be told, I was one of those America-hating, Yankee-Go-Home bashers who marched on the streets of Manila in the 1980s, demanding that the United States stop propping up dictator Ferdinand Marcos.

When I left in 1991, I did so not because of America’s greener pastures. I left because my life was threatened as a journalist in Manila.

It is easy for the millennials of today to sneer at our boomer generation for our hypocrisy, for wearing Lacostes and Nikes while shaking our fists at Uncle Sam. Guilty as charged! But even revolutionaries who have sworn to destroy America first savored their breath of freedom working here.

Consider this paradox of two titans in history: Ho Chi Minh, before he freed Vietnam from the French and American invaders, was a pastry chef in Boston and New York in 1912; and José Martí, before he inspired Cuba’s revolution, was a translator in New York and a publisher in Miami, Florida, in the 1890s.

Who knows? If Jose Rizal—who visited the cities of San Francisco, Reno, Chicago and New York in 1888—was not en route to London, he could have pulled up his sleeves and earned a living in America, too.

China overtaking America? Ask the droves of young Chinese who are arriving daily at Los Angeles International Airport, ignoring their leaders who tell them that China is now the greatest economy in the world.

Like that haunting refrain of Neil Diamond’s song “America”: “Everywhere around the world. They’re coming to America.”

But America is not for everyone. Even President Duterte, who enunciated the equivalent of a middle finger to then US President Barack Obama in 2016, is still smarting from a snub when he was denied a tourist visa in 2002, after he finished his anemic term as a congressman from Davao’s first district. He was trying to visit his girlfriend Cielito Avanceña, a nurse who worked here for four years.On the day the world was horrified by young Afghans climbing onto wheels of departing US C-17 airplanes, US President Joe Biden summarized that desperation in pursuit of a new life in America.

“There are millions of Afghani citizens who are not Taliban … who if given a chance, they’d be on board a plane tomorrow,” Biden said.

“It sounds ridiculous but a vast majority of people in communities like that want to come to America given a choice,” Biden added.

Biden is right. The allure of a life in America is still the ultimate dream for those multitudes making their way here. And as shown by those Afghans falling from the sky, some will defy, even death to make it here. —CONTRIBUTED