DFA working to get all Filipinos out of Kabul 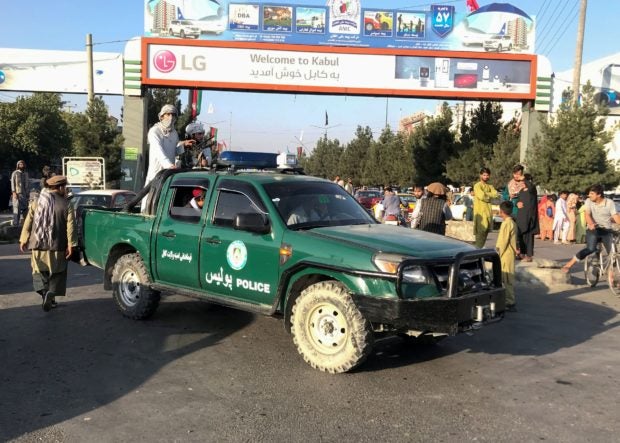 UNDER SIEGE Taliban fighters commandeer a police vehicle outside Hamid Karzai International Airport in Kabul, Afghanistan, as government leaders and foreigners race against time to leave the country’s capital. —REUTERS

Arrangements for the repatriation of all remaining Filipinos in Kabul, Afghanistan’s capital, continued as an initial batch of 32 was evacuated on Sunday night and taken to Doha, Qatar, where they were awaiting their flight to the Philippines, the Department of Foreign Affairs (DFA) said.

Another 19 Filipinos were also set to leave Afghanistan immediately. The DFA said the 51 evacuees were among the estimated 130 Filipinos, mostly professionals working for international companies, in the now-Taliban-controlled country.

The DFA added that it was in close coordination with the Philippine Embassy in Pakistan, which has jurisdiction over Afghanistan, on the repatriation of the remaining Filipinos.

“We’re on this. We’re taking out our people with chartered flights,” Foreign Secretary Teodoro Locsin Jr. said in a post on Twitter, adding that he was reaching out to the United States, Manila’s “only military ally, to watch our back.”

“We’re already out there. Islamabad PE (Philippine Embassy) handles Kabul. When the last Filipino is out; we’re shutting down that aspect as well. Now the job is to prevent Filipino trafficking to that place. I don’t think we had any under the Taliban,” Locsin said in another post. (See related story in World, Page B3.)

The ongoing repatriation was made after Manila raised alert level 4, which called for mandatory evacuation, from the whole of Afghanistan, due to the uncertain security situation.

Those in need of assistance can contact the Philippine Embassy in Pakistan or OFWHelp through the following: Whatsapp/Viber: +923335244762, by Messenger/Facebook: facebook.com/atnofficers.islamabadpe or facebook.com/OFWHelpPH, or through email: [email protected]

In a radio interview, Joseph Glenn Gumpal, a Filipino community leader in Kabul, said that so far, they had experienced no violence although they had heard of checkpoints manned by Taliban forces.

“By the grace of God, we’re okay for now since the Taliban forces are not here yet. But what if they come here to our area? We don’t know the Taliban’s plan, if they are going to enter our compounds or what,” he said, adding that members of the Filipino community were in constant communication about updates on evacuation efforts.

“We are really worried. We keep calling the Philippine Embassy to inquire about repatriation because we are really scared,” he said.

According to Gumpal, there are 173 Filipinos in Afghanistan, 78 of whom have agreed to join the government’s repatriation efforts, while some availed themselves of the evacuation plans of their companies which have their own contingency programs.

At a briefing in Malacañang, presidential spokesperson Harry Roque called on all Filipinos still in Afghanistan to leave. Those with relatives there should contact them and ask them to come home for their safety, he said.

For Sen. Aquilino Pimentel III, the situation in Kabul should serve as a reminder to the Philippines not to place too much faith in the United States as an ally or peacekeeper. He urged the country’s diplomats and foreign policy experts to look into the developments in Afghanistan to understand its global implications and draw lessons.

—WITH REPORTS FROM JEROME ANING AND DJ YAP INQ

Read Next
No Filipinos reported hurt so far in Haiti quake; Duterte condoles with Haitians
EDITORS' PICK
Omicron variant detected in more countries as scientists race to find answers
Gov’t plans to open COVID-19 vaccination for 5- to 11-yr-olds by January 2022
A delightful blessing!
Villar Group gears up for AllValue Shopping Party on Dec. 3; around P 1-million promos and discounts up for grabs
Legarda: Ending Violence Against Women, a cause for all
Gov’t eyeing COVID-19 vaccine booster for essential workers, indigents by Dec. 10
MOST READ
Quiboloy warns of ‘much worse than Omicron virus’ if his ‘persecution’ is not stopped
Marcoleta defends pol ads on ABS-CBN
MMDA: Number coding during afternoon rush hours back this week
PH updates ‘red list,’ travel ban imposed on 7 more countries
Don't miss out on the latest news and information.