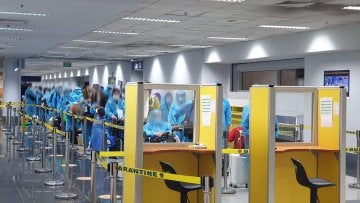 MANILA, Philippines — The Department of Foreign Affairs (DFA) has repatriated 271 Filipinos from Vietnam affected by economic difficulties and flight woes due to the COVID pa

The Filipinos were repatriated on Sunday through a chartered flight, the Philippine Embassy in Hanoi said.

“Most of the repatriated were in [distress] due to economic difficulties brought by the COVID-19 pandemic, while some of them were stranded in Vietnam due to flight cancellations,” the embassy said.

Of the 271 repatriates, 163 passengers boarded in Ho Chi Minh City while 108 overseas Filipinos joined from Hanoi, the DFA added.

“This is the 2nd DFA chartered repatriation flight from Vietnam this year bringing a total of 414 repatriates from that country,” Sarah Lou Arriola, DFA undersecretary for migrant workers affairs, said on Twitter.

LOOK : 271 distressed & stranded Filipinos just arrived at NAIA Terminal 3 from Vietnam. This is the 2nd DFA chartered repatriation flight from Vietnam this year bringing a total of 414 repatriates from that country. @teddyboylocsin @DFAPHL pic.twitter.com/QNNhZcncVa

The embassy said the Vietnamese government helped facilitate the exit visa of many of the Filipinos.

The Vietnamese government also assisted in the swift approval of the chartered flight and allowed the “necessary conditions for Filipinos to move through various regions in Vietnam in the midst of the strict social distancing measures.”