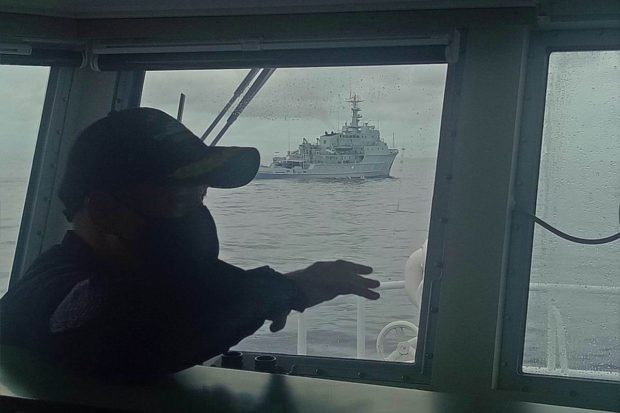 MOVING OUT In this photo taken on July 13, a Coast Guard patrol vessel tails a Chinese Navy warship, sighted near Marie Louise Bank off El Nido, Palawan, to ensure that it will leave Philippine waters. —PHOTO COURTESY OF THE PHILIPPINE COAST GUARD

A patrol vessel of the Philippine Coast Guard has again challenged and shooed away a foreign vessel, in another daring act to protect the country’s exclusive economic zone (EEZ).The vessel this time was a warship of the Chinese Navy, which the Coast Guard warded off at Marie Louise Bank, 272.24 kilometers off El Nido town in Palawan province.

The PCG, in a statement on Monday, said BRP Cabra (MRRV-4409) on July 13 sighted a “navy warship” carrying the flag of the People’s Republic of China and marked with Chinese characters.

BRP Cabra’s commanding officer, Commander Erwin Tolentino, issued a radio challenge while monitoring the warship’s movement using a radar system. The PCG vessel then moved closer to the Chinese ship to get a better view of its activities in Philippine waters.

Tolentino then said over the radio, “Chinese warship 189 in Philippine waters Marie Louise Bank, this is Philippine Coast Guard vessel MRRV-4409. In accordance with international and Philippines national laws, you are within the Philippine exclusive economic zone….You are advised to leave this vicinity.”

“Commander Tolentino made sure that the radio challenge was done calmly and in accordance with the law,” the PCG said.

The foreign ship did not respond to the radio challenge, prompting BRP Cabra to use its long range acoustic device to repeat the challenge against the warship.

It was then that the Chinese ship started moving out of Marie Louise Bank, with BRP Cabra following it to make sure it left the Philippines’ EEZ.

Aided by the “Manual on Rules on the Use of Force within the Philippines’ EEZ,” BRP Cabra continued to monitor the warship, which ran at a speed of 9.4 knots until it completely exited Marie Louise Bank.

On April 27, it shooed away seven foreign vessels believed to be manned by Chinese militias at Sabina Shoal in the West Philippine Sea.

Over the past few months, maritime patrol recorded the presence of several Chinese vessels “scattered” over various maritime features covered by Palawan’s Kalayaan town and other parts of the country’s EEZ.

The PCG vessel’s monitoring in the area and sections of the Kalayaan Island Group is part of its mission under Task Force Pagsasanay, which was formed in April to ensure the safety and security of Filipino fishermen in the country’s EEZ, including the West Philippine Sea.

“We are supporting the whole-of-nation approach in securing our maritime jurisdiction, especially the efforts of the National Task Force for the West Philippine Sea (NTF-WPS) to undertake maritime security, maritime safety, maritime law enforcement, maritime search and rescue, and marine environmental protection roles in our country’s waters,” PCG spokesperson Commodore Armando Balilo had said in a recent interview.

BRP Cabra also checked on Filipino fishers on a boat from Occidental Mindoro who were fishing in the bank at the time.

“The Filipino fishermen said they have been able to conduct normal operations without any untoward incident at sea, no harassment from other ships, and that they have been enjoying abundant catch,” the PCG said. INQ