MANILA, Philippines — Filipino fisherfolk could still fish in the country’s traditional fishing grounds, Malacañang said Thursday as it assured them of protection from the Philippine Coast Guard after China imposed a fishing ban in the South China Sea.

(Laws from other countries have no extraterritorial application.)

(So just stay there in our traditional fishing grounds since our coast guard is there to ensure the fishermen’s interests.)

The Philippines protested China’s fishing ban in the South China Sea, saying it encroaches on its exclusive economic zone. 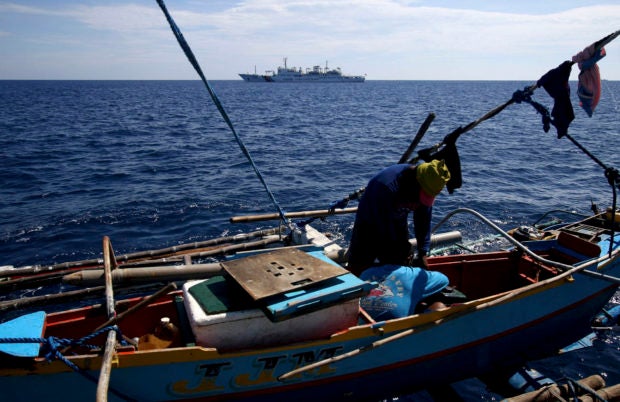 CHINA PATROL: Filipino fishermen prepare to fish at Panatag Shoal while a Chinese Coast Guard ship patrols a kilometer away in this photo taken in 2016. —FILE PHOTO/RICHARD A. REYES

“The Philippines does not recognize China’s unilateral imposition of a fishing moratorium in the South China Sea for the period 01 May to 16 August 2021,” the Department of Foreign Affairs (DFA) said in a statement on Tuesday.

It said China’s annual fishing moratorium went beyond its “legitimate maritime entitlements” under UNCLOS, adding that it was “unlawful under international law.”

“China cannot legally impose nor legally enforce such a moratorium in the West Philippine Sea,” it added.

China’s fishing ban extends to “waters north of 12 degrees north latitude” in the South China Sea, according to DFA.

In these waters, the Philippines has sovereignty and jurisdiction, the DFA said.