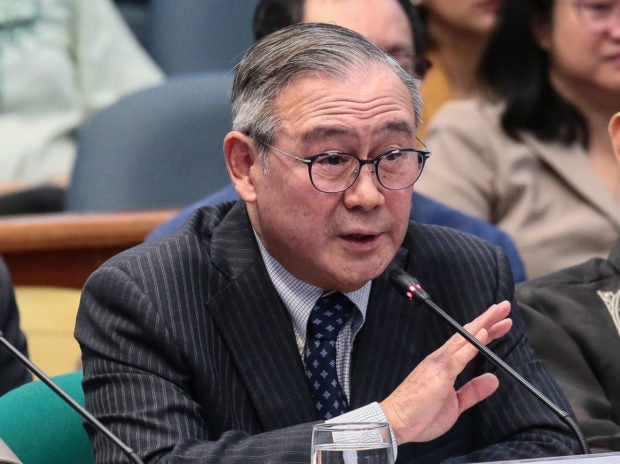 Duterte, in a public address aired Monday night, once again downplayed the country’s arbitral victory, saying it was “meaningless.”

“Duterte is completely correct. It is meaningless for now—for the purpose of retaking possession of what China took from us because we let it,” Locsin said in a series of tweets Tuesday.

and nuclear winter in our tropical latitude would set in. Rich Filipinas can finally take their mink coats out of cold storage and wear them. For a while. Plus they will glow in the dark like in a disco.

Earlier this month, the President also said that the country’s arbitral win over China is merely a “piece of paper,” like trash that can be thrown away.

In 2016, the United Nations-backed Permanent Court of Arbitration in The Hague, Netherlands ruled in favor of the Philippines and invalidated China’s expansive claims in the South China Sea, including the West Philippine Sea. Beijing, however, refuses to recognize the said ruling.

Locsin further agreed with Duterte’s decision not to raise the arbitral win before the United Nations “where China has the votes.”

Locsin has repeatedly rejected proposals to raise Manila’s arbitral victory before the United Nations, saying the Philippines will “lose” since the international organization “is dominated by countries grateful to China.”

In a 2016 ruling favoring the Philippines, the Hague-based court concluded that “there was no legal basis for China to claim historic rights to resources within the sea areas falling within the ‘nine-dash’ line.”

“The Arbitral Award was brilliant for its abstraction: merely defining what the maritime features—e.g. half the time submerged reefs—at issue generate in terms of maritime rights: ZERO,” Locsin went on.

“See the brilliance. The Arbitral Tribunal trashed historic claim as a basis of right because history yields to law.  Therefore, if China held on to and got more, the reefs would be within Philippine territory under UNCLOS. How then would access to them be possible if we denied passage through our territorial seas? No way. Duterte will not withdraw our Navy from the West Philippine Sea. Period,” he added.

While Duterte asserted that the country would not go to war with China over the maritime dispute, he previously said the Philippines would not withdraw its assets from the West Philippine Sea.

Locsin likewise mentioned the Philippines’ Mutual Defense Treaty (MDT) with the United States. The MDT obligates the two parties to defend each other in case of an armed attack.

“If passage is forced our Navy will fight and that would trigger the Mutual Defense Treaty, World War 3 hereabouts and nuclear winter in our tropical latitude would set in,” Locsin said.