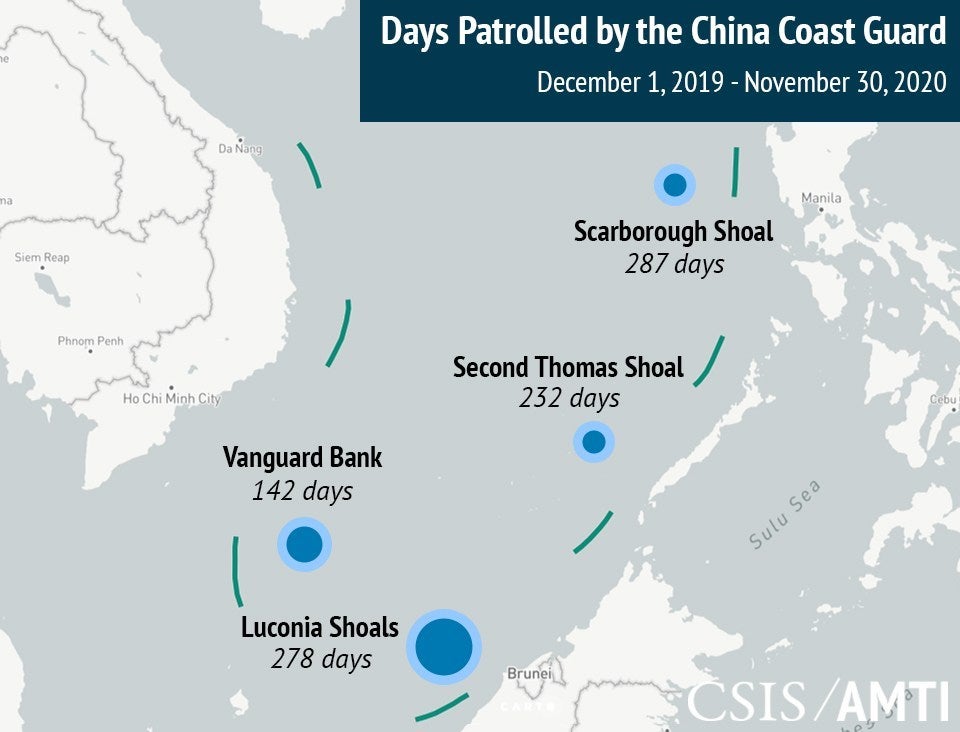 The COVID-19 pandemic did not stop or slow China’s deployment of coast guard ships “around symbolically important features” in the West Philippine Sea, including those lying inside the Philippines’ exclusive economic zone like Panatag (Scarborough) and Ayungin (Second Thomas) shoals. AMTI

In his pre-taped “Talk to the People” that aired Monday night, Duterte said all the country has to do is to “talk and talk” until “things correct itself.”

“For me, sir, the beginning of this problem was when we retreated. Since then, ‘yung mga paperworks about the arbitral award has become meaningless,” Duterte told former senator Juan Ponce Enrile, who was his guest in his pre-recorded public address.

“And the opposite camp of the political side ay sinasabi that I should do my very best in asking the UN,” he added.

Duterte was referring to the standoff between the Philippines and China in 2012 at the disputed waters.

“I was frank enough in the early days and I said that might makes it right. And we are not, unfortunately, on the side of might, so we cannot do anything because we cannot be in parity in force and so we have to talk,” he continued.

“Just talk and talk until such time by the grace of God if there’s an opportune time for all of these things to correct itself,” he also said.

Last week, Duterte said Manila will not withdraw its assets from the West Philippine Sea although he also noted he does not intend to quarrel with Beijing because of the Philippines’ “debt of gratitude” to China.