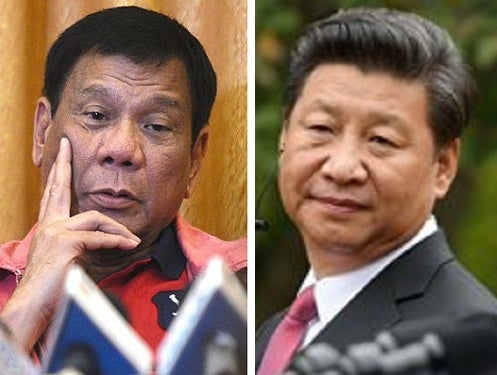 MANILA, Philippines — President Rodrigo Duterte bared Monday that Chinese President Xi Jinping had warned him of “trouble” when he told him plans to go to the West Philippine Sea and dig oil.

In a taped public address aired Monday, Duterte recalled his visit to China during the early days of his term as president with some Cabinet members.

“And pointedly, I said to President Xi Jinping in front of everybody, the two panels, there was a long discussion but I said, ‘Mr. President I know that we have conflicting claims but I have plans of going to West Philippine Sea to dig my oil,’” Duterte recounted.

“Tapos ang sagot ni President Xi Jinping, almost in whisper, parang ganito sir magkaharap, sabi nya in front of the witnesses I brought around just to make sure I will be correct all the time, being prudent about it.”

(Then the answer of President Xi Jinping, almost in [a] whisper, it was like this in front of each other, he said in front of the witnesses I brought around to make sure I will be correct all the time, being prudent about it.)

“Sabi ko, mag-dig ako ng oil. Sabi nya, [I said I’ll dig oil. He said] in whisper, ‘You know Mr. President, please do not do that. You will just sour up a new beginning here, new friendship found. But if you do that,’ he said in almost whisper ‘there will be trouble,’” he went on.

Previously, the President said he would only confront China and send warships in the West Philippine Sea if they start drilling oil.

Duterte had reasoned there was not enough fish to “quarrel” about in the disputed waters.