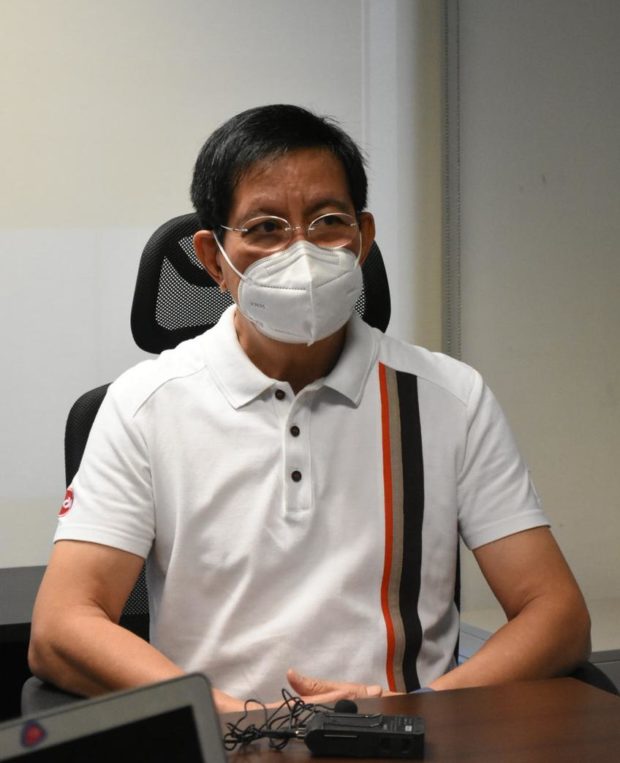 Senator Panfilo Lacson in the May 10, 2021 interview with INQside Look. Photo by Noy Morcoso

MANILA, Philippines — President Rodrigo Duterte’s recent pronouncements on the country’s maritime dispute with China are not only “confusing” Filipinos and the military, but are also benefiting China as incursions continue in the West Philippine Sea, Senator Panfilo Lacson said.

“It’s confusing to say the least. Mahirap kasi sa mga salita ng Pangulo, we don’t know anymore when he was serious or when he was joking. For the past five years ganyan kasi lagi yung nangyayari,” Lacson, chairperson of the Senate defense committee, said during an INQside Look interview Monday.

This, when asked about Duterte’s recent denial that he did not make any campaign promises in 2016 that he would “retake” the West Philippine Sea and “pressure” China about the matter.

“And kapag nalagay sa tight situation, the spokespersons will just say ‘No, he was just joking, he was not serious and hyperbole,’ and so forth and so on, but it sends a signal not only to the Filipino people but to the Chinese as well, because alam na natin yung mga incursions, [they’re] continuing,” the senator said.

Meanwhile, Lacson said the Philippine government should stand its grounds and maintain the country’s victory against China in the ruling of the Permanent Court of Arbitration in The Hague in 2016.

“Humina yung posisyon ng Philippines because we already won the arbitral ruling and while it is unenfroceable—dahil wala namang Army yung United Nations na mag-enforce niyan—it stays as a permanent ruling, nobody can change that anymore,” the senator said.

“Ang dapat kasi, we stand our ground and maintain that we won the arbitration,” he added.

Lacson stressed that the Philippines should tap into “militarily powerful” nations like the United States to exert pressure on China.

“In this case, ano ba yung pressure na kailangan nating kunin? From the more militarily powerful nations like the United States and we are covered by the Mutual Defense Treaty (MDT). Yun ang proteksyon natin. I think that’s a potent weapon in our arsenal na ‘di natin nata-tap,” he added.

The MDT between the Philippines and the United States calls for both nations to come to each other’s defense in case of an armed attack.

“Every time we would talk with the diplomats from the United States, ambassadors, political officers, sinasabi nila they are bound by the MDT but it’s the Philippines’ call in the first place,” Lacson went on.