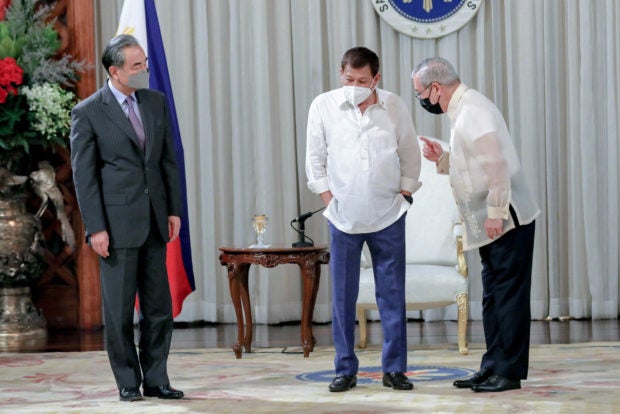 The Philippines’ top diplomat on Monday demanded in an expletive-laced message on Twitter that China’s vessels get out of the West Philippine Sea, marking the latest exchange in a war of words with Beijing over its activities in the resource-rich waters.

“China, my friend, how politely can I put it? Let me see … O … GET THE FUCK OUT.” Foreign Secretary Teodoro Locsin Jr. said in a tweet on his personal account.

“What are you doing to our friendship? You. Not us. We’re trying. You. You’re like an ugly oaf forcing your attentions on a handsome guy who wants to be a friend; not to father a Chinese province…,” he said.

The comments by Locsin, known for making blunt remarks at times, follow Manila’s protests for what it calls the “illegal” presence of hundreds of Chinese boats inside the Philippines 370-kilometer exclusive economic zone (EEZ).

Asked if Malacañang approved Locsin’s use of an expletive in a tweet calling on Chinese vessels to leave the West Philippine Sea, President Duterte’s spokesperson Harry Roque replied: “We will not interfere in Secretary Locsin’s right to free speech.”

Roque reiterated that the President’s policy on the West Philippine Sea would always be “careful, calculated, calibrated,” with Manila maintaining good relations with Beijing but never renouncing Philippine claims and entitlements in the area.

China’s embassy in Manila did not immediately respond to a request for comment to Locsin’s remarks. Its ambassador had earlier told Mr. Duterte that the vessels at the disputed Whitsun Reef (the Philippines calls it the Julian Felipe Reef), were fishing boats taking refuge from rough seas.

China claims almost the entire South China Sea, through which about $3 trillion of ship-borne trade passes each year. In 2016, a United Nations arbitration tribunal in The Hague ruled the claim, which Beijing bases on its old maps, was inconsistent with international law.

In a statement on Monday, the Department of Foreign Affairs (DFA) accused China’s coast guard of “shadowing, blocking, dangerous maneuvers, and radio challenges of the Philippine coast guard vessels.”

Philippine officials believe the Chinese vessels are manned by militia.

Locsin’s tweet came shortly after the Philippines announced that it had protested the “belligerent” acts of China in the West Philippine Sea. As of April 26, the country had filed 78 diplomatic protests to China since President Duterte took office in 2016, according to the DFA.

“What is so hard to understand about Duterte’s UN declaration that the arbitral award made all maritime features Philippines; no one else’s?” Locsin said in another post. He was referring to the President’s speech before the UN General Assembly in September 2020 where the latter affirmed the Philippines’ arbitral victory against China over the South China Sea.

“The award is now part of international law, beyond compromise and beyond the reach of passing governments to dilute, diminish or abandon,” Mr. Duterte said in his prerecorded speech.

The President noted that the Philippines’ commitment in the disputed part of the South China Sea was in accordance with the UN Convention on the Law of the Sea and the 2016 ruling of the Permanent Court of Arbitration in the Netherlands.

Mr. Duterte for the most part has pursued warmer ties with China in exchange for Beijing’s promises of billions of dollars in investment, aid and loans. While he still considers China “a good friend,” the President said last week: “There are things that are not really subject to a compromise.”

On Monday, Malacañang said China did not ignore the President’s appeals for Chinese vessels to leave the West Philippine Sea. “There used to be [around] 220 ships there, now only a few remain. That is why our request is for them to leave that place completely,” Roque said in his press briefing.

The day before, the Philippines vowed to continue maritime exercises in its EEZ in response to a China demand that it stop actions it said could escalate disputes.

Defense Secretary Delfin Lorenzana on Sunday night maintained that his and the President’s position on the West Philippine Sea issue were aligned and that his previous statements had conveyed that firm stance.

“President Duterte’s orders to us have been very firm and straightforward: defend what is rightfully ours without going to war and maintain the peace in the seas,” Lorenzana said in a video posted on social media.

—WITH REPORTS FROM JEROME ANING, JEANNETTE I. ANDRADE, REUTERS AND AFP