Duterte to China’s Xi Jinping: Filipinos are hungry; let them fish in peace

“I told him: ‘We have no quarrel. So just leave the fishermen alone because they have to eat,” Duterte said in Filipino in his pre-recorded briefing that aired late Monday night.

“I know that it’s yours — according to you. I’ve heard that several times.  But you know, you must also have heard of the fact that people are hungry,” Duterte went on, further recalling what he said to Xi.

“Filipinos are hungry, and you are not oblivious to that fact.  So kindly just allow our fishermen to fish in peace, and so there is no reason for trouble. If there is one, a brewing, you call our attention and we can talk immediately to solve the problem,” he added.

Duterte made his request to China weeks after the National Task Force on the West Philippine Sea (NTF-WPS) reported the presence of over 200 Chinese ships — including some from the maritime militia — near the Julian Felipe Reef.

The reef is well within the country’s exclusive economic zone. 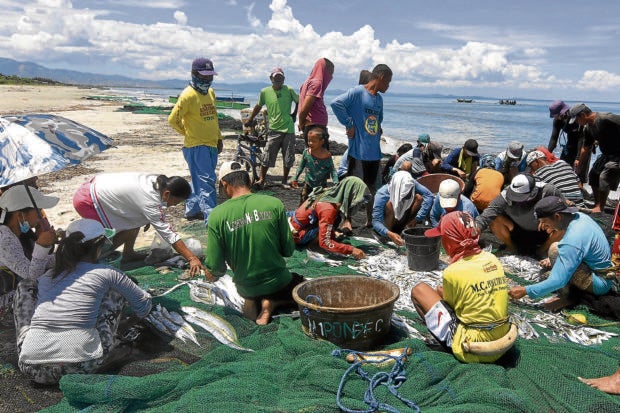 Fishermen in Pangasinan province, among the most vulnerable to harassment by Chinese Coast Guard vessels entering waters within the country’s exclusive economic zone, sort their catch after another day of risky forrays into the West Philippine Sea. (File photo by WILLIE LOMIBAO)

Contrary to claims by Chinese authorities, the Chinese vessels in the area are not fishing vessels as one of the ships spotted was actually a missile-carrying Houbei class boat.  This has deterred several Filipino fisherfolk from setting sail — prompting the Philippine government to deploy ships to secure them.

Duterte’s remarks on Monday were also part of his response to criticisms by former Foreign Affairs Secretary Albert del Rosario and former Supreme Court Senior Associate Justice Antonio Carpio that he was not prioritizing Filipino interests in the West Philippine Sea.

Duterte and the two former officials of the Aquino administration had previously butted heads on the issue, as Carpio said that it seemed that Malacañang was running “like a headless chicken” when it came to the maritime dispute with China.

Carpio’s made that statement in response to a question asked by Duterte if anything would happen if the Philippines would ask the United Nations to pressure China into accepting the ruling made in 2016 by the Permanent Court of Arbitration in The Hague.

The court ruled that the Philippines should enjoy exclusive rights to the West Philippine Sea, saying that China’s nine-dash line territorial claim had no historical and legal basis.