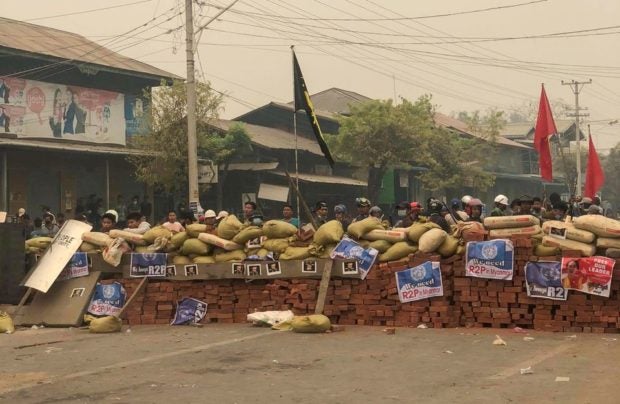 Protesters defend themselves from the troops in Kale, Sagaing region, Myanmar March 28, 2021 in this picture taken March 28, 2021 obtained by REUTERS.

Southeast Asian countries will discuss the crisis in Myanmar at a summit in Jakarta on Saturday, the Asean bloc’s secretariat said on Tuesday, after the European Union imposed its toughest sanctions yet on the junta that seized power there on Feb. 1.

The 10-member Association of Southeast Asian Nations (Asean) has been trying to find a way to guide fellow member Myanmar out of the bloody turmoil that has followed the military coup against an elected government led by Nobel laureate Aung San Suu Kyi.

Romeo Jr. Abad Arca, assistant director of the community relations division of the Asean Secretariat, said the summit would take place at its Jakarta headquarters on Saturday under strict health and security protocols due to the pandemic, confirming an earlier advisory.

It remains unclear how many leaders will attend in person though a Thai government official said on Saturday junta chief Min Aung Hlaing would go to Jakarta.

The foreign ministry of Brunei, which holds the Asean chair this year, declined to comment on arrangements for the summit on Monday.

Myanmar’s military has shown little willingness to engage with its neighbours and no sign of wanting to talk to members of the government it ousted.

Pro-democracy politicians including ousted members of parliament from Suu Kyi’s party announced the formation of a National Unity Government (NUG) on Friday.

It includes Suu Kyi, who has been in detention since the coup, as well as leaders of the pro-democracy protests and ethnic minorities.

The NUG says it is the legitimate authority and has called for international recognition and an invitation to the Asean meeting in Min Aung Hlaing’s place.

Former U.N. chief Ban Ki-moon urged his successor to engage directly with Myanmar’s military to prevent an increase in post-coup violence and said Southeast Asian countries should not dismiss the turmoil as an internal issue for Myanmar.

U.N. Secretary-General Antonio Guterres’ special envoy on Myanmar, Christine Schraner Burgener, has communicated with the military since the coup, but the junta has not allowed her to visit.

In its firmest response yet to the ousting of the elected government led by Suu Kyi, the European Union said on Monday nine members of the junta’s State Administration Council, formed the day after the coup, had been targeted with travel bans and asset freezes. Information Minister U Chit Naing was sanctioned also.

The decision follows similar measures by the United States. Min Aung Hlaing and Myint Swe, who has been acting president since the coup, were blacklisted by the EU last month.

“The military forces and authorities operating under the control of the SAC have committed serious human rights violations since February 1, 2021, killing civilian and unarmed protesters,” the EU said.

Myanmar’s state media said on Monday that 258 civilians have died in violence in the country in anti-military protests since Feb. 1 and that other tolls were exaggerated.

According to the Assistance Association for Political Prisoners (AAPP) activist group, 738 people have been killed by security forces since the coup.