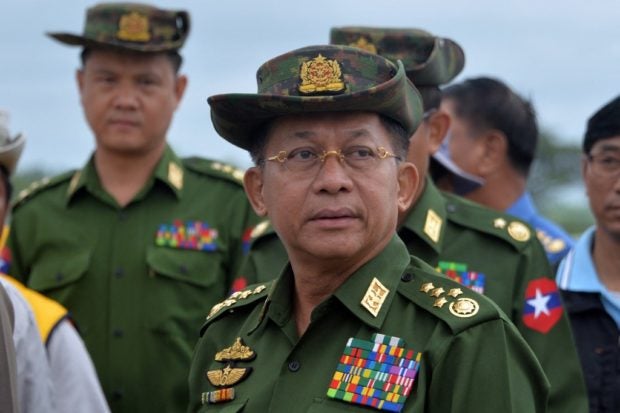 The February 1 putsch triggered a massive uprising, bringing hundreds of thousands of protesters to the streets to demand a return to democracy, while civil servants have boycotted work in a bid to shutter the junta’s administration.

The military has deployed lethal force to quell the anti-coup movement, killing more than 720 people and detaining some 3,100 activists, journalists and dissidents, according to a local monitoring group.

The international community has largely condemned the generals for use of force against unarmed civilians — imposing targeted sanctions against top military brass, their families and army-linked businesses.

But regional leaders have sought to open communications with the regime, and on Saturday Thailand’s Ministry of Foreign Affairs confirmed that a summit of Southeast Asian leaders in Jakarta on Myanmar’s situation will include the senior general.

The April 24 meeting of the 10-country bloc of the Association of Southeast Asian Nations (Asean) is expected to address the ongoing crisis in post-coup Myanmar.

The announcement drew dismay from activists, who have long beseeched foreign leaders not to recognize the junta.

“#Asean do not legitimize the Myanmar Military junta as a government by inviting MAH to attend the summit,” said prominent activist Wai Wai Nu on Twitter. “(The) Junta is illegitimate and illegal.”

By Saturday evening, #ASEANrejectSAC was among the top-trending on Myanmar’s twitter.

The military has consistently justified the putsch by alleging widespread fraud in November’s elections, which Suu Kyi’s party won in a landslide.

They claim power will be handed back to a civilian administration after elections are held in about a year — though they recently extended the timeline to a two-year period.

Saturday was the first day of Myanmar’s traditional New Year, and hundreds in commercial hub Yangon visited the famed Shwedagon Pagoda to pray as soldiers patrolled the streets.

Leading up to the Buddhist New Year, the Thingyan festivities were a somber affair — a far cry from previous years when revelers would take to the streets for city-wide water fights.

Instead, activists sloshed crimson paint in Yangon to symbolize the bloodshed, while protesters wore red across the country in nationwide demonstrations.

More violence erupted Saturday in the central gem-producing city of Mogok, when security forces cracked down on protesters.

According to an AFP-verified video filmed by a resident, soldiers crouched on a street as their commanding officer shouted that he wanted “deaths”.

A rescue worker told AFP at least one had died.

“He was shot in the stomach,” he said, adding that six others injured had to be rushed to the hospital.

Despite the threat of violence, protesters have continued to gather across the country in defiance of the junta, carrying posters demanding for Suu Kyi to be freed.

Some demonstrations — like in Yangon and central Monywa city — also touted support of the so-called “National Unity Government”, a shadow administration formed by ousted MPs working in hiding to thwart junta rule.

“It has been more than 70 days since the coup… we can no longer see our future and goals,” said 19-year-old Max in Yangon.

“We have high hopes for a government that can compete with the military regime.”

Freeing up the prisons

Among them, more than 130 were foreigners, state-run media reported in the evening.

There have been two other mass releases since the coup.

The first was in mid-February, which rights groups feared was a move to free up space for military opponents, and the second on the eve of Armed Forces Day when the regime released around 900 detained demonstrators.

But its jails have continued to fill.

So far, more than 3,100 people — the bulk of them anti-coup protesters and activists — have been detained, according to local monitoring group Assistance Association for Political Prisoners.

It remains unclear if those released Saturday included post-coup detainees.

Doctors refusing to work under the regime — leaving hospitals unstaffed in a pandemic — have also drawn the wrath of the junta.

By Saturday night, the arrest warrants for all totaled 420.