Aides dismiss rumors circling Duterte's health, including one which said he has died in Singapore | Global News
Close
menu
search

Aides dismiss rumors circling Duterte’s health, including one which said he has died in Singapore 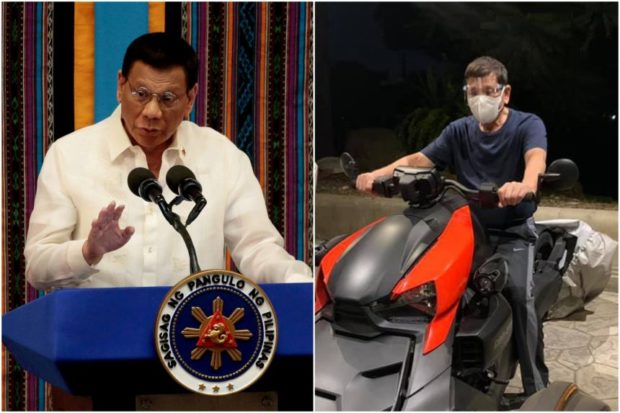 MANILA, Philippines — President Rodrigo Duterte has not made any public appearance for close to two weeks now, fueling speculation that his health is declining, with some even claiming that he has died.

His aides and sources have dismissed the rumors – one was that he had suffered a mild stroke and was taken to Singapore where he purportedly died, another was that plans were being drawn up for a military junta to run the Philippines.

Adding to the fog was a disclosure that his daughter, Davao Mayor Sara Duterte-Carpio, flew to Singapore last week.

Senator Christopher Go, who remains Mr Duterte’s closest aide and confidant, has been posting photos and short clips that showed himself and Mr Duterte in good health and working in his office in Manila.

“Nothing to worry about. In fact, we are together, and he continues working,” said Mr Go.

Photos of Mr Duterte walking as well as sitting on a motorcycle that were taken by Mr Go were shared on social media on Saturday (April 10).

His spokesman Harry Roque said the President would be addressing the nation on Monday.

Sources also told The Straits Times that Mr Duterte was never in Singapore, much less died there.

But the photos showing “proof of life” and reassurances by his aides and ministers have failed to tamp down persistent rumors that his health may be failing.

The last time Mr Duterte was seen in public was on March 29, when he was on hand to receive the shipment of a million doses of a vaccine made by Chinese firm Sinovac.

He then went on hiatus for the Holy Week.

He was expected to resurface on Wednesday for his weekly televised address. But that was abruptly cancelled following reports that more than 100 of his bodyguards tested positive for Covid-19.

That same day, his daughter, Ms Duterte-Carpio, confirmed that she had flown to Singapore a day earlier with her son, a nanny and a bodyguard.

She declined to say why she went there.

That sparked speculation that Mr Duterte himself could be in Singapore after suffering a mild stroke.

Purported photos of an air ambulance that supposedly flew Mr Duterte to Singapore surfaced, and the hashtag #nasaanangpangulo (Where is the president?) trended on social media.

By Saturday, the nation was abuzz with rumors that he was already dead.

Mr Duterte had disappeared from public view before, each time rekindling talk about his declining health.

His known ailments include back problems, migraines due to nerve damage and Barrett’s esophagus, which affects his throat. He also suffers from Buerger’s disease which can cause blockages in the blood vessels.

He has admitted to suffering from an autoimmune disease that causes muscle weakness and has joked more than once in his speeches that he may have cancer.

Former senator Antonio Trillanes, one of Mr Duterte’s harshest critics, said in a post on Twitter that he believes Mr Duterte is not sick.