Solon calls on China, US to demilitarize South China Sea 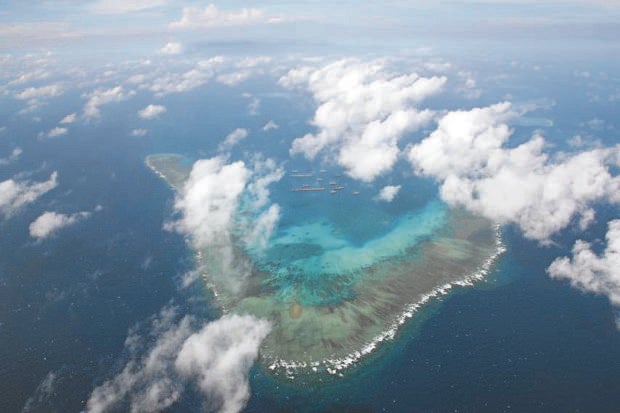 SEEKING SHELTER? A break in the clouds on Monday, March 22, 2021, shows some of the nearly 200 Chinese vessels supposedly seeking shelter, according to the Chinese Embassy, at Julian Felipe Reef in the West Philippine Sea. But the Philippine government and the US Embassy separately say these are Chinese maritime militia vessels and that the weather is fine. —CONTRIBUTED PHOTO

MANILA, Philippines — Bayan Muna Rep. Carlos Zarate is calling on China and the United States to “demilitarize” the South China Sea, saying recent events in the contested waters could further heighten tensions in the area.

In making his appeal on Wednesday, Zarate cited the warning made by Hu Xijin, editor of the Global Times newspaper of the Chinese Communist Party, of a “strong response” if the Philippine military acted rashly on the Chinese occupation of Julian Felipe (Whitsun) Reef.

These two events, Zarate said, could further heighten tensions in the contested waters.

“In this light we are calling for a complete demilitarization of the South China Sea amid the ramping up of  military and naval presence by China, U.S. and other western powers in the disputed maritime region,” Zarate said in a statement.

“The recent aggressive and expansionist actions of  China is now apparently  being taken as a cue by western powers, particularly the U.S., France, [etcetera] to increase its military and naval presence in the region. This increasing militarization of the South China Sea, including our West Phillipine Sea, is making this region a potential flashpoint for trouble,” the lawmaker added.

Zarate likewise called on his colleagues in Congress to “register its collective voice against China’s aggressive actions in the West Philippine Sea.”

“Congress should not stand idly by when there is infringement on our territory and sovereignty,” Zarate said.

The Philippine government has filed a number of diplomatic protests over the recent incursions of China in the West Philippine Sea.

Defense Secretary Delfin Lorenzana has said that the continued presence of Chinese maritime militias in the Julian Felipe Reef reveals their intent to further occupy features in the West Philippine Sea.