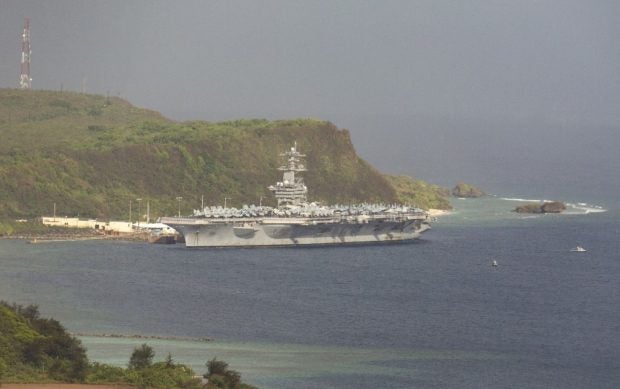 The aircraft carrier USS Theodore Roosevelt, is docked at Naval Base Guam in Apra Harbor amid the coronavirus pandemic on Monday, April 27, 2020. (Photo by Tony AZIOS / AFP)

MANILA, Philippines — Deputy Speaker Rufus Rodriguez said Wednesday he believes that the United States’ freedom of navigation (FON) operations or patrols in the South China Sea, including the West Philippine Sea, will help deter Chinese incursions in the area.

Rodriguez made the remark after reports that the US Navy’s Theodore Roosevelt Carrier Strike Group (TRCSG) entered the South China Sea Sea on April 4 to conduct routine operations.

It was the second time the TRCSG has entered the South China Sea during its 2021 deployment to US 7th Fleet area of operations, the US Navy said.

“Two FON patrols in more than three months. They should criss-cross that area more often to challenge China’s claim over most of the South China, including international waters and a large part of the Philippine EEZ (Exclusive Economic Zone),” Rodriguez said in a statement.

According to Rodriguez, conducting more FON operations “is walking the talk on the part of our defense treaty ally, the US,” adding that more South China Sea crossings could deter further Chinese incursions in the Philippine EEZ.

“They should support their statements of support for the Philippines in the West Philippine Sea dispute with actual actions on the ground,” he said.

“That would also show the readiness of the United States to come to the aid of the Philippines in case of conflict as provided under the 1951 Mutual Defense Treaty between the two countries,” he added.

The Philippine government earlier filed a diplomatic protest over the presence of the Chinese vessels at the Julian Felipe Reef in the West Philippine Sea.

Defense Secretary Delfin Lorenzana has said that the continued presence of Chinese maritime militias in the Julian Felipe Reef reveals their intent to further occupy features in the West Philippine Sea.