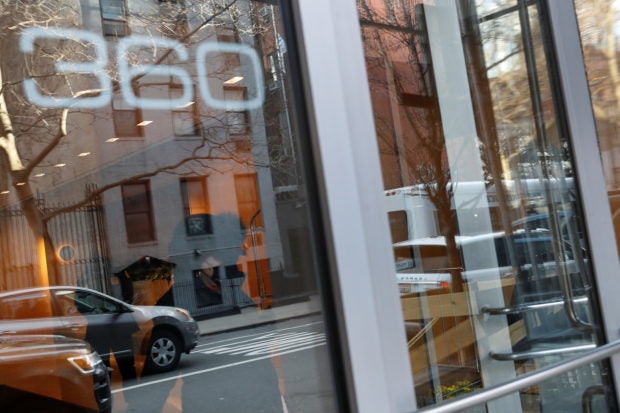 A woman leaves 360 West 43rd street as security and a doorman stand inside the building, where a man has now been arrested and charged with assaulting a 65-year-old Asian woman in a hate crime, where the incident was reported, in New York City, New York, U.S., April 1, 2021. REUTERS/Shannon Stapleton

NEW YORK  – A New York man charged with assaulting a 65-year-old Asian woman in a hate crime was scheduled to appear before a Manhattan Criminal Court judge on Monday, as community activists demonstrated outside.

Police have identified Brandon Elliot, 38, as the man seen in a video kicking the woman to the ground and then kicking her head several times on March 29 near Times Square in Manhattan.

He was arrested at his New York City residence on March 30, police said.

“This attack would not have happened if he was not released,” said Phil Wong, president of the Chinese American Citizens Alliance of Greater New York, in front of the courthouse.

The New York Times identified the victim as Vilma Kari, an immigrant from the Philippines, citing a law enforcement source. An NYPD spokesman declined to confirm her identity. According to the Times, Kari suffered a fractured pelvis.

Hate crimes reported against Asian Americans increased 149% in 2020 in 16 major U.S. cities compared with 2019, according to the Center for the Study of Hate and Extremism at California State University, San Bernardino.

Former U.S. President Donald Trump often referred to the coronavirus as the “China virus” and the “China plague.”

Concern over such crimes was heightened when six Asian women were among eight people shot dead last month at Atlanta-area spas. A 21-year-old man was charged with the murders. Police have yet to determine a motive.