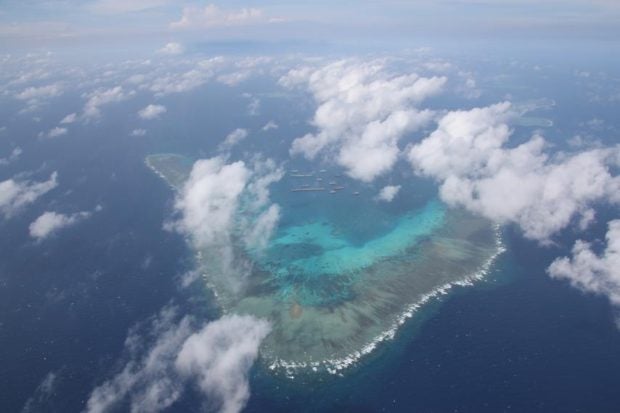 Chinese vessels remain in place on Julian Felipe (Whitsun) Reef in the West Philippine Sea, apparently defying a diplomatic protest and a demand by Defense Secretary Delfin Lorenzana for them to leave the area, which is inside the Philippines’ exclusive economic zone. The military says it spotted 183 Chinese militia vessels there on March 22, 2021. AFP

The Philippine government on Sunday (March 21) protested the incursion of over 200 Chinese militia vessels that were spotted last March 7 moored at the boomerang-shaped reef located inside the Philippines’ exclusive economic zone.

But the Chinese ships, also known as People’s Armed Forces Maritime Militia (PAFMM), have not left the area as of Monday (March 23), according to the most recent maritime patrol report of the Armed Forces of the Philippines (AFP).

The nature of Chinese militia vessels is quite tricky. Most pose as fishing vessels, but they are not actually fishing. Militias are being used to aggressively enforce China’s territorial claims in the South China Sea, including West Philippine Sea, without sparking overt war. Formally, they are part of China’s armed forces.

This tactic is referred to by security experts as “gray zone strategy,” where the vessels are used “to avoid direct responsibility by arguing that these are not government vessels.”

These vessels are also monitored on Scarborough (Panatag) Shoal, Philippine-occupied Pag-asa (Thitu) Island, as well as other areas in the Kalayaan Island Group in the West Philippine Sea.

“If China does not draw down the PAFMM presence and then enforces its exclusionary measures against Filipino fishermen who have been using Union Banks as a fishing ground for decades, Whitsun Reef will become President Duterte’s Scarborough Shoal,” maritime expert Dr. Jay Batongbacal wrote in an analysis for 9DASHLINE, an independent online platform for maritime issues in the Indo-Pacific region.

China now controls Scarborough Shoal, site of a standoff in 2012 between Philippine and Chinese government vessels. Since then, China has maintained its presence there through coast guard and militia ships.

“China’s extended presence at Whitsun Reef through continuous anchorage can be a variation of the ’Scarborough Shoal model’ whereby China took control of a maritime feature in the open sea through continuous maritime presence and establishment of exclusionary measures against non-Chinese vessels,” said Batongbacal, who is also the director of the University of the Philippines’ Institute for Maritime Affairs and Law of the Sea.

“For the Philippines, it would be another serious blow to its fracturing maritime jurisdiction in the West Philippine Sea,” he added.

While this was not the first time that Chinese militia vessels were spotted on Whitsun Reef, there were no reports of such a significant number in a single location in 2020.

“This time, the photographs indicate that China has not been merely passing through but has been using Whitsun Reef as an anchorage or roadstead similar to the way it shelters ships at its larger island bases like Mischief and Subi Reefs,” Batongbacal said.

The takeover by China of Scarborough Shoal during the time of then President Benigno Aquino III, who was a vocal opponent of China’s expansionism, had pushed the Philippines to file a case at the Permanent Court of Arbitration.

But since then, China treated the area as its territory, blocking Filipino fishermen from access to the shoal. The Duterte administration claimed the situation there turned in favor of the Philippines because of closer relations with China brought about by Duterte’s foreign policy pivot. Cases of harassment of Filipino fishermen in the area by Chinese vessels continued to be reported, however.

Duterte set aside the arbitration ruling against China, which the Philippines had considered as a major victory, and opted to avoid antagonizing China in exhange for economic opportunities and investments.

The potential loss of control of Julian Felipe Reef by the Duterte administration “will be attributed to his overly accommodating and prone posturing over the West Philippine Sea since 2016,” Batongbacal said, adding that it was “unlike the experience of his predecessor, who lost control of Scarborough Shoal after a prolonged standoff.”

“Last year, Duterte stated that China was in ‘possession’ of the South China Sea and underscored his position that it was futile to act against it. This is all the signal China needs to confirm his real lack of resolve,” he said.

“Nearly five years of downplaying Chinese moves and kowtowing to Chinese positions in the contested maritime region have enabled Beijing to create a fait accompli such as turning Whitsun Reef into an anchorage,” he added.

Andrew Erickson, a professor at US Naval War College and who has written extensively on Chinese maritime militia, said that the current situation on Julian Felipe Reef could lead to the same development as in Scarborough Shoal.

“If not properly countered at Whitsun Reef, or elsewhere, PAFMM vessels could support further territorial seizure akin to China’s gains at Scarborough Shoal in 2012,” he wrote on Foreign Policy.

He said the US government “must finally complete the vital task of revealing and calling out China’s Maritime Militia and reliably reporting its activities in real time.”

“I don’t think so because we have a close friendship,” Roque said of relations with China. “Everything can be discussed between friends and neighbors,” he said at a press briefing on Monday (March 22).

The Chinese embassy in Manila also on Monday denied the presence of maritime militia in the reef, which China had named as Niu’e Jiao. It said that the Philippines should not inflame the situation by speculating.

The Philippine government, however, earlier said that the weather was fair at the time the vessels were spotted in the area without signs they were just fishing there.

The US embassy in Manila on Tuesday (March 23) expressed concern over China’s incursion on Juan Felipe Reef and said it was standing by with the Philippines.

“We share the concern of our Philippine allies. The PRC (People’s Republic of China) uses maritime militia to intimidate, provoke, and threaten other nations, which undermines peace and security in the region,” it said in a statement.

“Chinese boats have been mooring in this area for many months in ever increasing numbers, regardless of the weather. We stand by the Philippines, our oldest treaty ally in Asia,” it said.