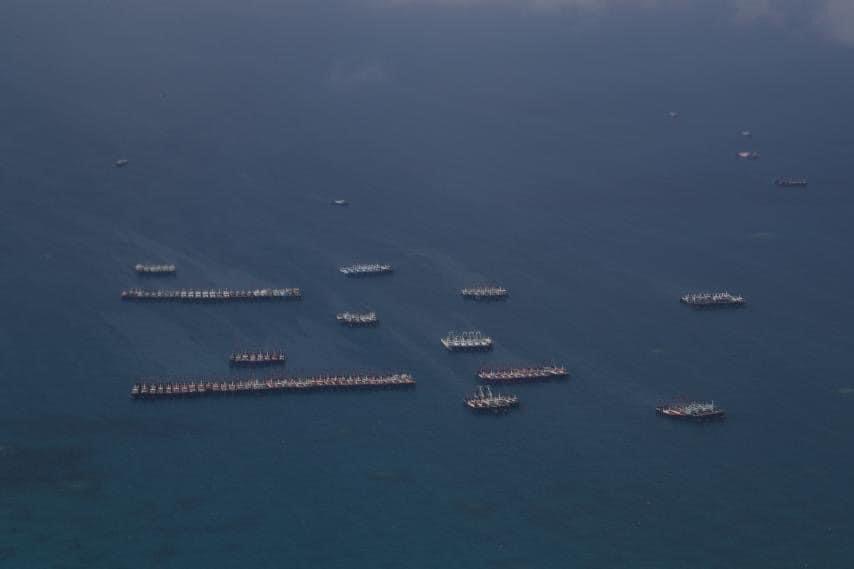 Chinese vessels remained in place on Julian Felipe (Whitsun) Reef in the West Philippine Sea, despite a diplomatic protest and a demand by Defense Secretary Delfin Lorenzana for them to leave the area, which is inside the Philippines’ exclusive economic zone. AFP

MANILA, Philippines—Chinese vessels remained in place on Julian Felipe (Whitsun) Reef in the West Philippine Sea, apparently defying a diplomatic protest and a demand by Defense Secretary Delfin Lorenzana for them to leave the area, which is inside the Philippines’ exclusive economic zone (EEZ).

According to data from reconnaissance flights led by the Western Command (Wescom) on Monday (March 22), the vessels were still in the area, some 175 nautical miles of Bataraza town, Palawan province and well within the Philippines’ EEZ. The Armed Forces of the Philippines (AFP) has yet to release new figures.

Chinese militia vessels are still in Julian Felipe (Whitsun) Reef in the West PH Sea, 15 days after they were first reported by the Coast Guard.

INQUIRER.net learned from a source that 180 Chinese vessels were spotted on the reef as of Friday (March 19).

On Sunday (March 21), Lorenzana accused China of “incursion” after 220 militia boats were spotted moored at the boomerang-shaped reef last March 7.

“We call on the Chinese to stop this incursion and immediately recall these boats violating our maritime rights and encroaching into our sovereign territory,” Lorenzana said.

The Philippines filed a diplomatic protest also on Sunday evening.

The Chinese embassy in Manila on Monday denied the presence of “maritime militia” in the reef, which China had named as Niu’e Jiao in a sign that it was staking a claim on the area, too.

“Any speculation in such helps nothing but causes unnecessary irritation. It is hoped that the situation could be handled in an objective and rational manner,” said the embassy.

It also said the reef was part of China’s Nansha Qundao, one of two political districts in the South China Sea established by the Chinese government in 2020 and which the Philippines protested.

The Philippine government, however, earlier said that the weather was fair at the time the vessels were spotted in the area without signs they were just fishing there.

Maritime expert Dr. Jay Batongbacal said the Philippines should not be complacent and continue to call out China until the ships actually leave.

Chinese activities there, he said, should be publicized and under close scrutiny.

“We should continuously watch what they are doing there, and report every move,” he told INQUIRER.net.

“We should ask allies and friends to do the same, and place China’s activities there under close scrutiny , and ask them to similarly report what they see especially if it could harm mutual interests,” he added.

Batongbacal said the presence of Chinese vessels in the area, the northernmost part of Union Banks, allows them to expand control, as China had already established presence in the south (Johnson South Reef) and middle (McKennan Reef).

“Whether the vessels are stationed there in preparation for other operations, we don’t know for sure,” Batongbacal said.

“They may be on stand by in case China requires them for exercises/activities elsewhere in South China Sea, e.g., to interfere with or shadow US/other navies’ vessels,” he said.

“There is concern that it is preparatory to occupation or reclamation of Whitsun Reef itself,” Batongbacal said.

“However, no dredgers have been sighted yet; so it may be a variation of the control they exercise over Scarborough Shoal. When they begin shooing away fishermen from Whitsun Reef and Union Banks, that will be the sign,” he added.

In 2020, Radio Free Asia reported that China had deployed its militia ships in the Union Banks, although their numbers did not reach as high as 220 like they did last March 7.

International security analysts have been saying that China is using the same playbook it used in Panatag (Scarborough) Shoal to establish de facto control of a strategic area.

China now controls Scarborough Shoal, a site of a standoff in 2012 between the Philippine and Chinese government vessels. Since then, China has kept its presence there through coast guard and military ships.

The shoal is a common fishing ground which is also inside the Philippines’ EEZ.

China, using its mythical nine-dash line, claims ownership of all of South China Sea, including waters close to the shores of other claimant countries, in mockery of the Permanent Court of Arbitration ruling in 2016 that declared this claim invalid and baseless.