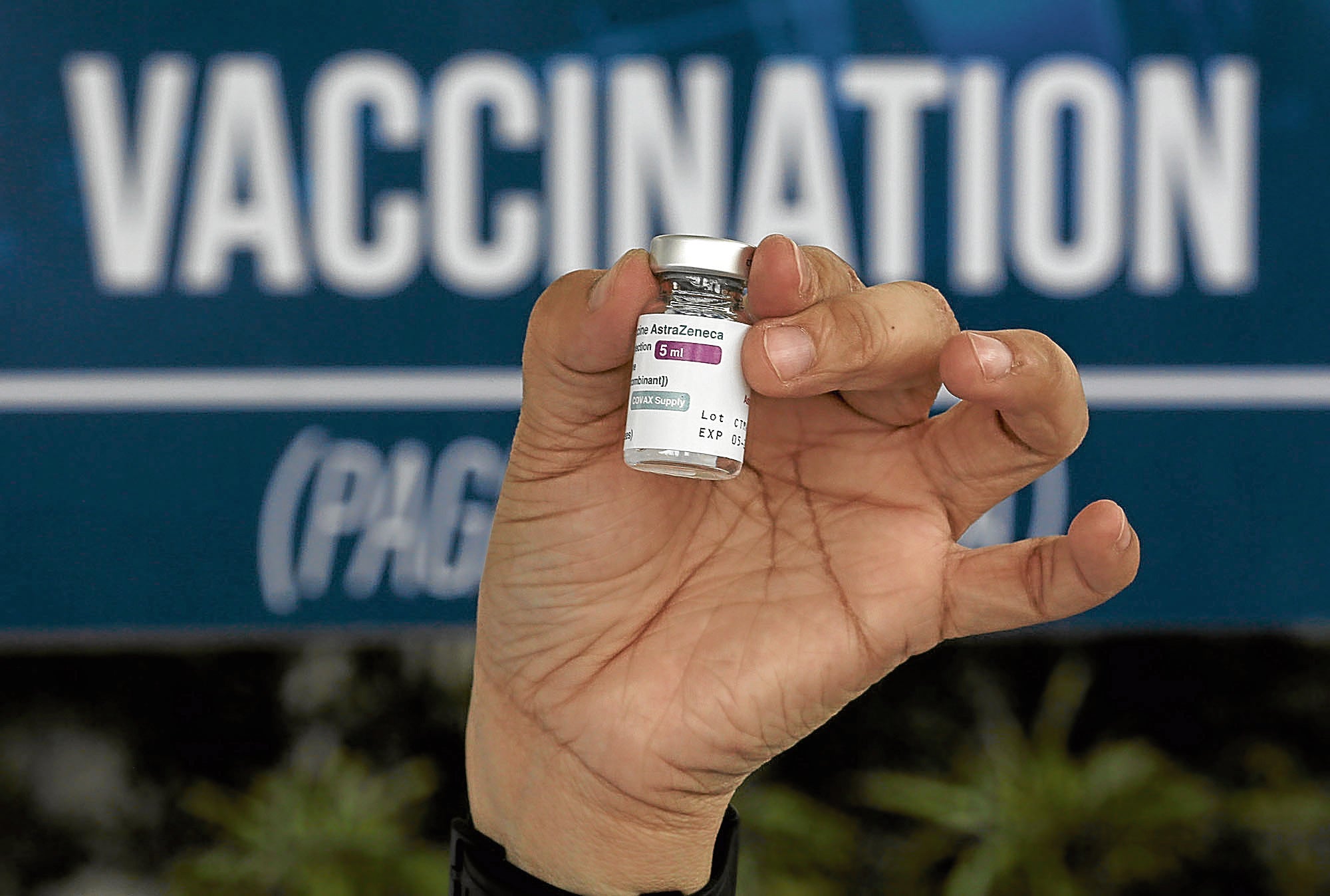 ON HOLD Several European countries have postponed or limited the rollout of the AstraZeneca vaccine, following reports of the formation of blood clots in some people who had been inoculated and even some deaths. —RICHARD A. REYES

The Department of Health (DOH) and the Food and Drug Administration (FDA) on Friday said it would continue administering AstraZeneca’s COVID-19 vaccine, despite the suspension of inoculations in several countries in Europe due to reports of blood clots and a number of fatalities.

“At present, the DOH and the FDA emphasize that there is no indication for the Philippines to stop rollout of AstraZeneca vaccines,” the two agencies said in a joint statement.

Nevertheless, they are “closely coordinating on this matter,” together with the National Task Force Against COVID-19.

“The public is assured they will closely monitor all deployed vaccines,” the DOH and the FDA said.

The Philippines has so far received 525,600 doses of AstraZeneca’s COVID-19 vaccine through the COVAX global vaccine pool coled by the World Health Organization. About 4.5 million more AstraZeneca doses are expected to be delivered in May, also coming from COVAX.

Several countries in Europe have postponed or limited the rollout of their quota of the vaccine, following reports of the formation of blood clots in some people who had been inoculated and even some reported deaths.

Austria earlier stopped using a batch of AstraZeneca shots while investigating a death from coagulation disorders and an illness from a pulmonary embolism.

Denmark suspended the shots after a 60-year-old woman who was given an AstraZeneca jab from the same batch used in Austria formed a blood clot and died, Danish health authorities said.

Italian authorities have ordered the withdrawal of a batch of the vaccine following the reported deaths of two men in Sicily who were recently inoculated.

Estonia, Latvia, Lithuania, Luxembourg and Romania have followed after Norway and Iceland in suspending inoculations with the AstraZeneca vaccine while investigations continue.

Still, the European medicine regulator EMA said the vaccine’s benefits outweighed its risks and could continue to be administered.

Thailand on Friday joined these European nations in suspending the vaccine, a decision that led to the embarrassing spectacle of Prime Minister Prayut Chan-ocha abruptly canceling his own televised jab.

The DOH on Friday said it had recorded, as of Tuesday, 21 serious “adverse events” or side effects following immunization.

At a media briefing, Health Undersecretary Maria Rosario Vergeire said the side effects included difficulty in breathing and chest pains.

Of the 21 serious adverse events, 20 received the CoronaVac vaccine and one person received the AstraZeneca vaccine. They were observed and given first aid when necessary, Vergeire said.

She also said the National Adverse Events Following Immunization Committee was studying the causality of the side effects, adding that the committee hypothesized that some of the adverse events were caused by anxiety or fear, either of getting vaccinated, or of needles.

Meanwhile, 957 others have experienced nonserious side effects including muscle pain, pain at the injection site, fever, high blood pressure and rashes, Vergeire said.

Of the 957 who experienced these side effects, 872 were inoculated with the CoronaVac vaccine and 85 received the AstraZeneca vaccine.

As of Wednesday, a total of 114,615 individuals have been vaccinated against COVID-19

Side effects following vaccinations are normal and should not be feared, Vergeire said.

“When our children go to the pediatrician to get their shots, the doctor advises parents to watch out for possible fever or irritability shortly after. Our COVID-19 vaccines are the same. These are usual and should not cause fear,” she said in Filipino.

According to the DOH, another 272 patients have recovered, bringing recoveries up to 546,912. However, another 87 have also perished, bringing the death toll to 12,694.

The OCTA Research Group has warned in a new report that in Metro Manila alone, new cases per day could reach up to 4,000 by the end of March.

On Friday, OCTA warned further there could be as many as 6,500 new cases a day by the end of March, if there is no change in the current trend.

The report also identified 12 cities in the capital region which were among the top areas with a “significant” upward trend in the number of new COVID-19 cases—Quezon City, Manila, Pasay, Makati, Parañaque, Taguig, Malabon, Pasig, Valenzuela, Caloocan, Marikina and Navotas.

Of these cities, Quezon City has recorded the most new cases in the past week, averaging 274 confirmed infections daily.

OCTA recommended localized lockdowns to slow the surge of infections.

“Localized lockdowns have been shown to be effective in slowing down increasing trends in new cases. Continued monitoring and strict implementation by the local governments will hopefully slow down the rate of infection in [the capital region] and put an end to this surge,” OCTA said.

The group also recommended other restrictions, including but not limited to curfews, border controls, reduced capacity in certain establishments, limitations in social gatherings, and continued compliance with health protocols by residents.

On whether the two-week curfew beginning on Monday could help stop the spread of the virus, OCTA research fellow Guido David said “it should help, of course.”

“How much it will help, we will see,” he added. —WITH REPORTS FROM REUTERS AND AFP

Read Next
Labor attaché rapped over OFW beating
EDITORS' PICK
Would the military allow me to stay this long if I’m inutile? – Duterte
65% of Filipinos say Duterte’s health should be made public – SWS
Pre-order the new vivo Y20s [G] to get a free TWS earphone
In good spirits: SMDC helps farmers and residents through Kadiwa Market
Smart three-peats as country’s fastest mobile network – Ookla
DSWD chief admits ‘slow start’ in distribution of aid in ‘NCR Plus’
MOST READ
Vico Sotto frets getting photos of ‘butt vaccination’ from Pasig dwellers
Metro Manila to have shortened curfew hours from 8 p.m. to 5 a.m. under MECQ
San Miguel Corp. continues to invest heavily in the Philippines’ future
COVID-hit Roque slams ‘un-Christian’ query on how fast he secured hospital bed
Don't miss out on the latest news and information.