Dredger seized off Bataan ‘not a Chinese ship’ — embassy 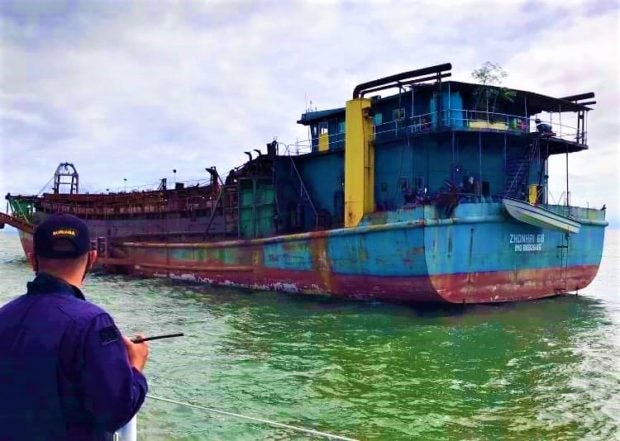 JANUARY 29, 2021 A Chinese dredging ship illegally entered the waters of Bataan on Wednesday, according to the Philippine Coast Guard and the Bureau of Customs. The vessel’s automatic identification system transponder was reportedly turned off to hide its location and identity. Two Cambodian crewmembers aboard the vessel also failed to present proper documents. (Photo from the Philippine Coast Guard)

MANILA, Philippines — The dredging vessel recently seized for “illegal and unauthorized presence” in Philippine waters was not a Chinese vessel, the Chinese Embassy in Manila claimed Wednesday.

“We have noticed some media speculation and reports on a so-called ‘Chinese dredging ship MV Zhonhai 68’,” the embassy said in a statement.

“Initial investigation on the identity of MV Zhonhai 68 by relevant Chinese authorities has shown that the ship is NOT registered in China and NOT a Chinese ship. It is also noted that there was NO Chinese national on the dredging ship when it was found,” it added.

Citing information from the International Maritime Organization (IMO), the embassy said the ship is under the flag of Sierra Leone.

It was earlier reported that the Philippine Coast Guard and the Bureau of Customs seized MV Zhonhai 68, identified in reports as a Chinese vessel, around 13 kilometers southwest off Orion Point in Bataan province.

Cmdr. Armand Balilo, spokesperson for the PCG, said that while the dredging ship was flying the Sierra Leone flag, one of the flags of convenience used by the Chinese to take advantage of lower taxes and cheap labor, “its ownership is still China.”

The seizure of the ship triggered calls for the government to look for and investigate Chinese dredging vessels operating illegally in Philippine waters.

“The Embassy hopes that any responsible remarks and reports should be based on facts, rather than speculation and misinformation,” the embassy went on.

“China is ready to render further assistance to the Philippine authorities concerned in its investigation, should there is such a need,” it added.

Previously, the embassy also slammed “false accusations” against Beijing’s coast guard law, which earned concerns from several Philippine lawmakers and was subject of a fresh diplomatic protest filed by the Department of Foreign Affairs.

This law, the embassy claimed, allows the Chinese Coast Guard to “take all necessary measures, including the use of weapons when national sovereignty, sovereign rights, and jurisdiction are being illegally infringed upon by foreign organizations or individuals at sea.”

But the embassy insisted that the content of the law conforms with international conventions and is not targeted at any specific country.

Read Next
Russia aims to distribute vaccine doses for 500M people globally in 2021
EDITORS' PICK
Every Filipino home can now be a smart home with realme TechLife
Don’t waste the hope of vaccines, warns WHO
Nestlé Philippines’ ‘NESCAFÉ Plan’ bags Grand Anvil at PRSP 56th Anvil Awards
Smart reinforces superiority with best speed and mobile video experience in PH
Pope Francis to meet top cleric Sistani on second day in Iraq
822 NPA-free barangays set to get P20-M gov’t aid — Esperon
MOST READ
So: I lacked connections to succeed in PH ‘culture’
MVP casts doubts on Ray Parks sabbatical from TNT
Jesuit lawyer, constitutionalist Fr. Joaquin Bernas dies at 88
Gerald admits being with Julia, reveals breakup with Bea through ‘too many conversations’
Don't miss out on the latest news and information.