MANILA, Philippines — The Philippine Coast Guard (PCG) and the Bureau of Customs (BOC) seized a Chinese dredger for “illegal and unauthorized presence” in Philippine waters more than a year after it was cleared to leave the country, the Coast Guard said on Friday.

The MV Zhonhai 68 was spotted on Wednesday during a maritime security patrol about 13 kilometers southwest off Orion Point in Bataan province by PCG and BOC personnel aboard BRP Panglao.

“Upon boarding, the joint operatives discovered the automatic identification system transponder of said vessel was turned off and its two Cambodian crew members aboard failed to present proper documents,” the PCG said in a statement.

The website vesseltracker.net identified Zhonhai 68 as a 2,340-ton general cargo ship that is registered and sailing under the Sierra Leone flag. It says the ship is operated by HK Weifeng Hangyun Co. Ltd.

According to world-ships.com, HK Weifeng Hangyun Co. Ltd. is a company registered in Malaysia.

Chinese ship operators often fly flags of other countries, or so-called flag of convenience, to take advantage of, among others, low taxes and cheap labor.

The BOC found that the customs field office in Aparri town, Cagayan province, had issued a departure clearance for the dredger over a year ago, according to the Coast Guard.

“Hence, its presence at said vicinity [of Orion] is illegal and unauthorized,” it said.

The customs bureau would soon issue a warrant of seizure and detention against the dredger, it added.

“There’s no problem with that,” Balilo told the Inquirer by phone. “But its ownership is still China.”

The Chinese dredger is now anchored in waters between Bataan and Manila Bay, he said, adding that the ship was not conducting any dredging operation when it was accosted. 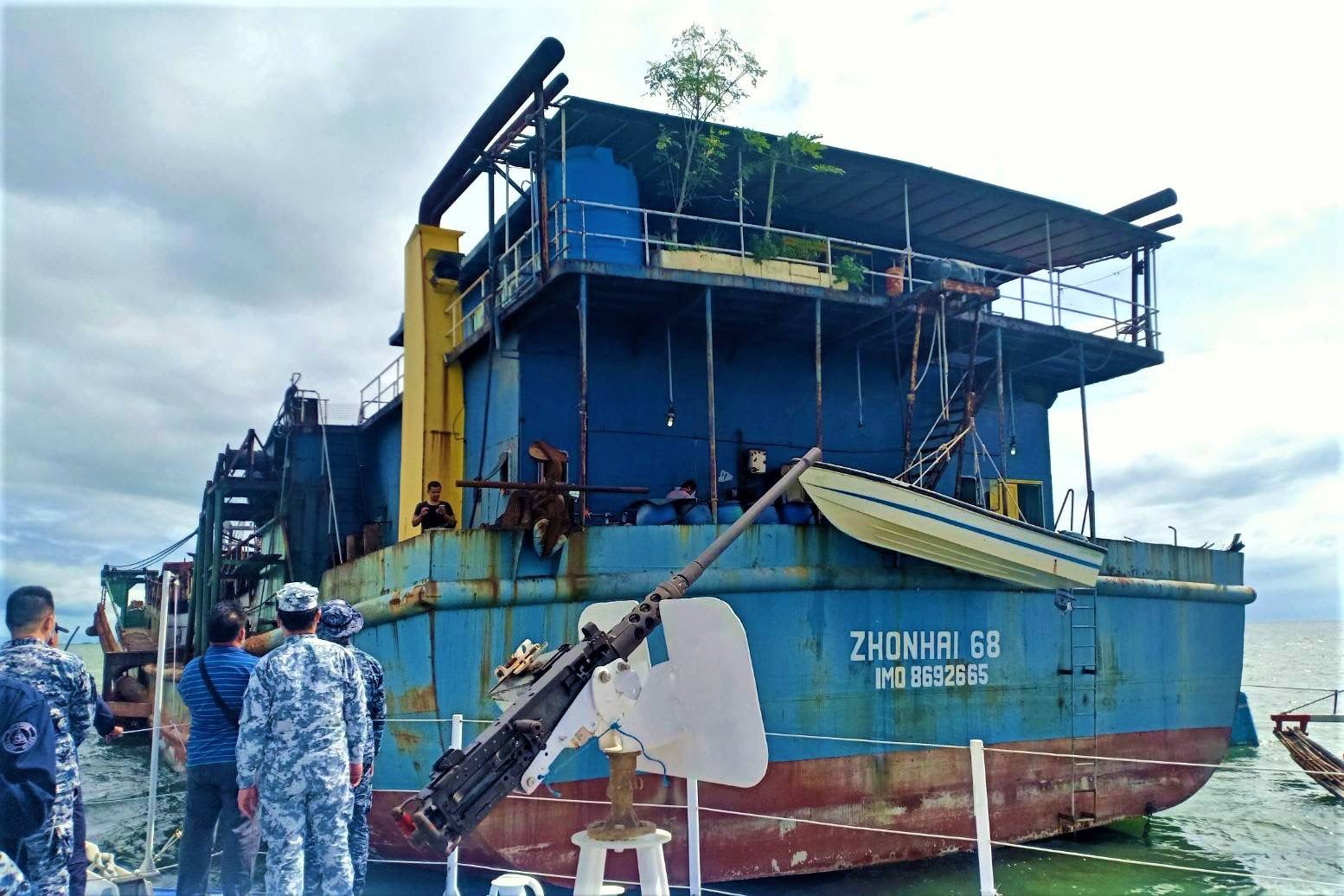 CAN’T HIDE The 2,340-ton MV Zhonhai 68 dredging vessel could not hide its illegal presence close to Orion Point in Bataan province where Coast Guard and customs maritime patrol found the Chinese ship on Wednesday. The dredger’s automatic identification system had been turned off to hide its name and location. —PHILIPPINE COAST GUARD PHOTO

The seizure of the vessel came just days after Foreign Secretary Teodoro Locsin Jr. filed a diplomatic protest against China for a law that Beijing recently passed allowing its Coast Guard to fire at foreign ships passing through Chinese-claimed waters.

China has a long-running maritime dispute with the Philippines, Vietnam, Malaysia and Brunei over its claim to almost the entire South China Sea, including the West Philippine Sea, waters within the Philippines’ 370-kilometer exclusive economic zone.

The Philippines won a landmark international arbitral court ruling in July 2016 invalidating China’s baseless historical claims, but President Duterte had set it aside in exchange for loans and other financial aid from Beijing.

The PCG and BOC have been intensifying the government’s border control and antismuggling campaign since they signed a joint patrol agreement in September 2020.

The presence of Chinese vessels in Philippine waters has constantly raised suspicions among Filipinos.

In September 2016, the Philippine government released photos of Chinese ships capable of dredging, raising concerns that China could be planning another artificial island at Scarborough Shoal, known locally as Panatag Shoal.

A Chinese dredging ship and its 15 crew members were held in Aklan province in January 2017 for dredging a section of the Aklan River without a permit.

Personnel from the Department of Environment and Natural Resources (DENR), the National Bureau of Investigation, Coast Guard and Army soldiers served a cease-and-desist order on the operations of MV Zhong Hai 18 and STL Panay Resources Co. Ltd.

In April 2019, a Chinese-manned hopper dredger appeared without prior notice off Lobo town, Batangas province, alarming residents and unraveling a plan by a private company to ship tons of sand from a river running through the municipality to build a runway at Hong Kong International Airport.

In September that year, seven undocumented Chinese workers were arrested when they were found to be involved in an illegal dredging operation in Masinloc town, Zambales province. They were arrested on a dredging vessel and a sand carrier anchored at a local pier. 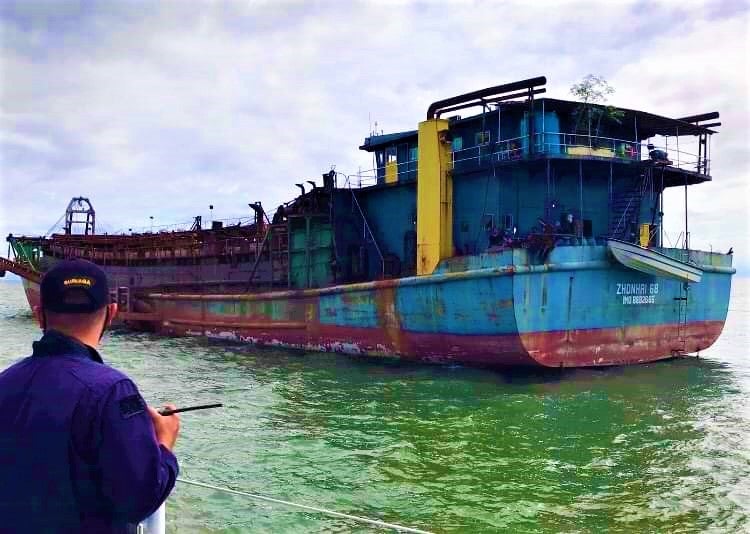 SEIZURE WARRANT The Chinese-owned MV Zhonhai 68 is anchored in waters between Bataan and Manila Bay on Friday awaiting a formal seizure warrant from the Bureau of Customs. —PHILIPPINE COAST GUARD PHOTO

In March last year, Masinloc Mayor Arsenia Lim said the town council had passed a resolution asking Zambales Gov. Hermogenes Ebdane Jr. to look into the possible violations of at least 12 foreign dredging and quarrying vessels that were anchored within a marine protected area.

According to PCG records, eight of the vessels arrived in Zambales waters between February and December 2019 while three dredging ships docked at a local pier in February 2020. The other vessel remained moored since September 2018.

In June last year, the Chinese-registered dredger MV Zhong Hai 69 Alfa had run aground off the coast of Botolan town in Zambales, about 200 meters from the shores of Barangay Bangan, according to the PCG. The vessel was operated by Z2K Resources Inc.

In July 2019, residents near the Cagayan River said they had seen several dredging vessels with Chinese markings in the area.

At the height of Typhoon “Hanna” (international name: Lekima) that year, one of the dredgers ran aground due to strong winds and rough waves.

The Aparri town council later approved a resolution asking the DENR to issue a cease-and-desist order against Pacific Offshore Exploration Inc. The company was contracted by the Cagayan province for a dredging project in Aparri town.

According to the town council and residents, the dredging activities involved extraction of black sand for export.

Mamba said the dredging activities at the mouth of the Cagayan River would give way to the reopening of the Port of Aparri. —WITH REPORTS FROM GREG REFRACCION, JOANNA ROSE AGLIBOT, VILLAMOR VISAYA JR. AND INQUIRER RESEARCH