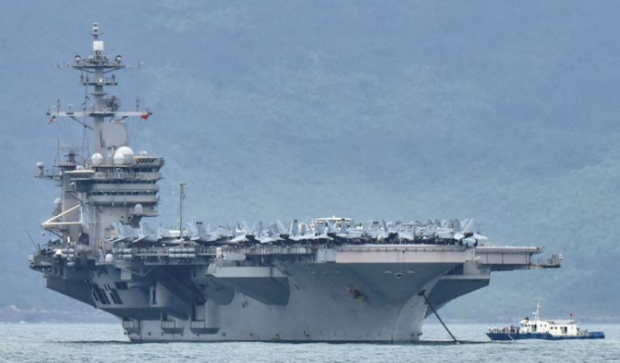 MANILA/HANOI/BANGKOK — A U.S. aircraft carrier group led by the USS Theodore Roosevelt entered the South China Sea over the weekend to promote “freedom of the seas” at a time of U.S. concern about China-Taiwan tensions and Beijing asserting its maritime agenda.

The patrol comes just days after Joe Biden was sworn in as U.S. president and follows a year of repeated demonstrations of military power by both Beijing and Washington.

China has complained about U.S. vessels in the South China Sea close to islands it controls, claims, or constructed and turned into military installations.

The Trump and Obama administrations carried out such patrols regularly, ostensibly to challenge China’s “nine-dash line” claim to jurisdiction over almost the entire South China Sea, which an international arbitral tribunal ruled has no legal basis.

The U.S. Indo-Pacific Command said Saturday’s patrol was to “ensure freedom of the seas, (and) build partnerships that foster maritime security” suggesting Biden, as with the “pivot” strategy of the Obama administration he served as vice president, will pursue deeper engagement and alliance-building in Southeast Asia, to try to prevent China establishing regional hegemony.

Malaysia, Vietnam, the Philippines and Brunei, as well as Taiwan, have territorial claims in the waterway and largely welcome the U.S. presence, mainly as a check on China’s militarization and its vast coastguard and fishing fleet.

Southeast Asian countries last year expressed worry that the escalating U.S.-China tensions could lead to military confrontation, with potential for big disruptions to a vital trade route, which would have devastating consequences for their economies.

The United States has accused China of bullying and attempting to build a “maritime empire”, announcing several rounds of sanctions on Chinese state companies involved in building artificial islands.

China sees the United States as an outsider interfering in a region in which it sees itself as a force for peace and stability.

Tensions have risen as a result of what the United States saw as underhanded tactics by China to advance its territorial claims while its neighbors were fighting coronavirus epidemics.

Vietnam and the Philippines have protested China’s establishment of administrative districts in the disputed Paracel islands and in the Spratly islands. Protests also followed China’s military drills near the Paracels, including the firing of ballistic missiles from several locations into waters nearby.

Chinese coastguard and survey vessels were repeatedly tracked in 2020 near energy exploration in offshore plots operated by Malaysia and Vietnam, disrupting activities and leading to weeks-long standoffs.

Though not directly linked, the U.S. patrol came a day after China passed a law allowing its coastguard to open fire on foreign vessels. That could increase the risk of conflict given the competing territorial claims and the vast distances travelled by China’s coastguard fleet.

The bill, which China says is in line with international practices, also allows coastguard personnel to demolish other countries’ structures on reefs it claims, and to board and inspect foreign vessels in China-claimed waters.

“The law heightens the risk of inducing unintended incidents at sea,” said Ha Hoang Hop, a fellow at Singapore’s ISEAS–Yusof Ishak Institute, adding it could also be considered a warning to Washington.

Several analysts expect the United States to continue the patrols and firm up relations with littoral states, and for China to increase military exercises and disrupt any efforts to resume energy activities in waters it considers its own.

Read Next
DND pressed not to let China ‘stab us in the back’ on WPS claim amid ‘vaccine diplomacy’
EDITORS' PICK
822 NPA-free barangays set to get P20-M gov’t aid — Esperon
Smart reinforces superiority with best speed and mobile video experience in PH
Every Filipino home can now be a smart home with realme TechLife
Nestlé Philippines’ ‘NESCAFÉ Plan’ bags Grand Anvil at PRSP 56th Anvil Awards
Violence done in the name of God ‘the greatest blasphemy’ – Pope Francis
Don’t waste the hope of vaccines, warns WHO
MOST READ
So: I lacked connections to succeed in PH ‘culture’
Rights lawyer survives attack by playing dead, loses all case files
Leave PH or leave ABS-CBN: Billy Crawford makes tough choice
Pacquiao honors ‘best trainer in the world’ Roach
Don't miss out on the latest news and information.