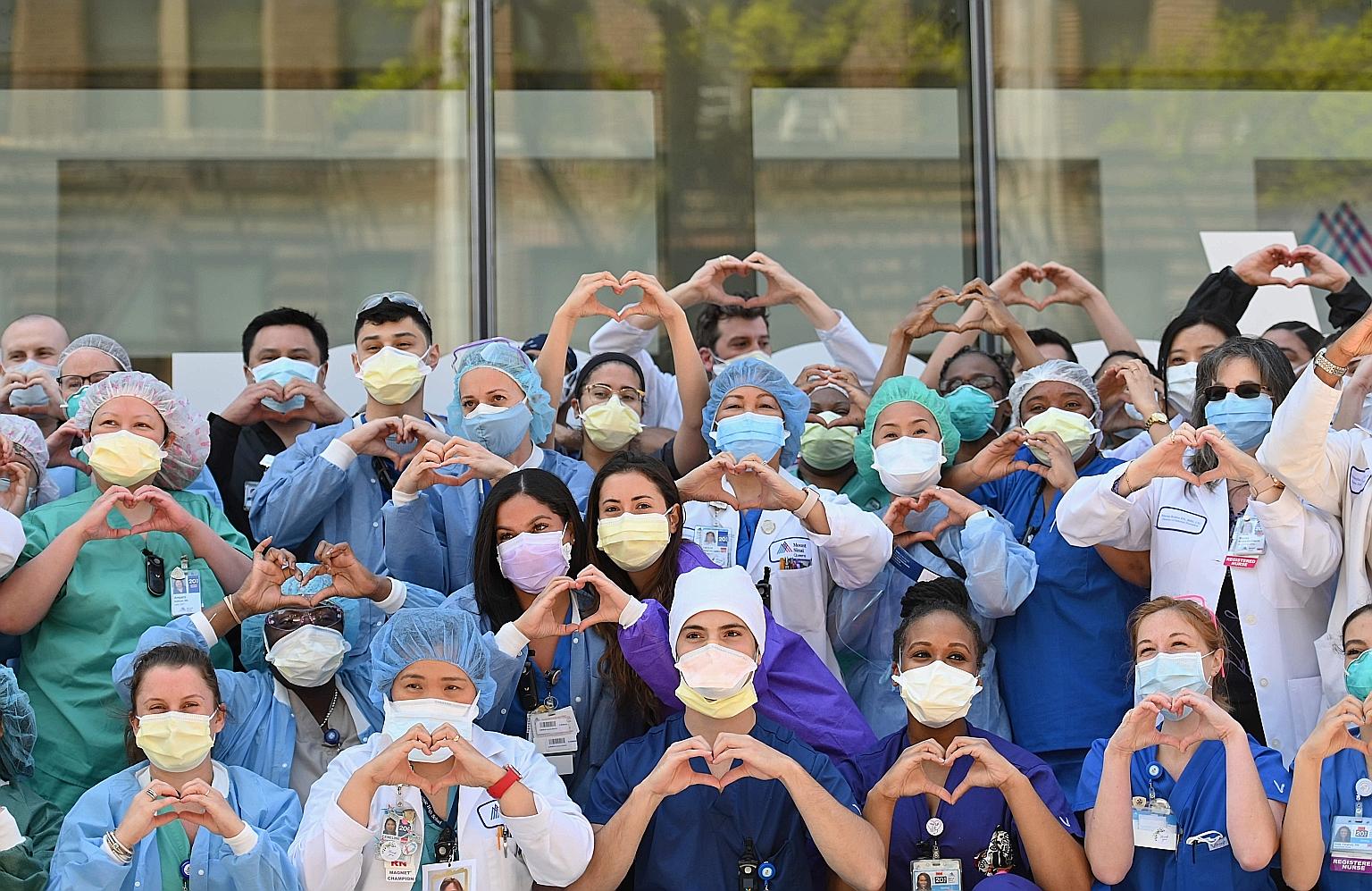 (FILE) Nurses and healthcare workers gesturing love in celebration of Nurse Week and International Nurses Day outside Mt Sinai Queens in the Queens borough of New York City. ProPublica reported that at least 30 Filipino health workers had died in the New York-New Jersey region since the end of March. AFP via The Straits Times/Asia News Network

MANILA, Philippines — After their Filipino colleagues succumbed in “shocking numbers” to Covid-19 last spring, nurses from the Philippines who are working in New York City hospitals are dreading the disease’s second wave of infections, a report from the New York Times said.

According to a Times report dated January 15, a number of studies reveal how hard the Covid-19 had affected Filipino health care workers currently based in the city.

“Of all the nurses who died from the virus nationwide, one study found, close to a third of them were Filipino,” the Times reported, citing a study from the National Nurses United dated September 2020.

Further, the newspaper added that according to an analysis by ProPublica, at least 30 Filipino healthcare workers had died from Covid-19 in New York City alone last June.

A survey published in September last year by the National Nurses United, the largest nurses’ union in the U.S., likewise showed that 67 Filipino nurses have died of the disease.

“That figure, which was pulled from public obituaries, is around a third of the total registered nurses who have died nationwide, though Filipinos make up only 4 percent of those nurses overall,” the Times reported.

“Now another wave of the virus has arrived. The infection rate in New York City has risen in recent weeks, and hospitalizations are at alarming levels; more than 450 New Yorkers have died of Covid since the beginning of 2021. And many Filipino nurses fear their hospitals could again be crushed under caseloads that recall the harrowing months of March and April,” the paper added.

However, the Times noted that Filipino nurses in New York City are hoping that the surge of Covid-19 cases in the winter will not be as deadly as the wave of infections back in spring.

“Many say their hospitals are better prepared this time: They know how and when to use ventilators, for example,” the report read.

According to market and consumer data company Statista, a recent study by The Guardian and Kaiser Health News also showed that over a third of the healthcare workers who died in the U.S. due to Covid-19 are immigrants, most of which are from the Philippines.

Read Next
PH gets P3.72-B grant, 500K vaccine doses from China
EDITORS' PICK
Violence done in the name of God ‘the greatest blasphemy’ – Pope Francis
Nestlé Philippines’ ‘NESCAFÉ Plan’ bags Grand Anvil at PRSP 56th Anvil Awards
Every Filipino home can now be a smart home with realme TechLife
Smart reinforces superiority with best speed and mobile video experience in PH
Don’t waste the hope of vaccines, warns WHO
822 NPA-free barangays set to get P20-M gov’t aid — Esperon
MOST READ
Rights lawyer survives attack by playing dead, loses all case files
So: I lacked connections to succeed in PH ‘culture’
Gerald admits being with Julia, reveals breakup with Bea through ‘too many conversations’
MVP casts doubts on Ray Parks sabbatical from TNT
Don't miss out on the latest news and information.