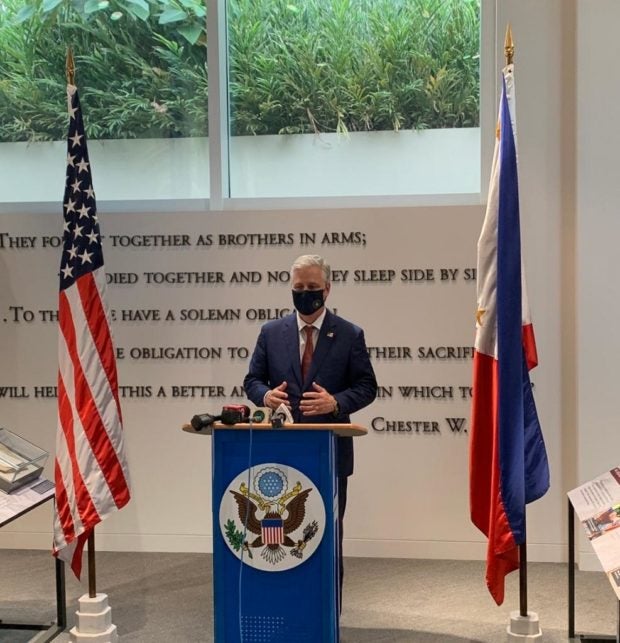 MANILA, Philippines — China has slammed the Trump administration’s top security adviser over his remarks that “deliberately exaggerated regional tensions” between Beijing and Manila.

The Chinese Embassy in Manila accused US National Security Advisor Robert O’Brien, who visited the Philippines, of issuing “some unreasonable remarks” on issues concerning the South China Sea (SCS), Hong Kong and Taiwan.

“He blatantly accused China on no ground, grossly interfered in China’s internal affairs, deliberately exaggerated regional tensions and attempted to sow discord between China and the Philippines,” the embassy said in a statement Monday.

The embassy said it “firmly” opposed O’Brien’s remarks, which it said was “full of Cold War mentality and wantonly incite confrontation.”

During his speech at the building of the Department of Foreign Affairs on Monday, O’Brien reiterated Washington’s support for Manila’s fight for control over the West Philippine Sea.

“I just want to say that those resources belong to the children and grandchildren of the people here. They belong to the [Filipino] people,” O’Brien said.

“They don’t belong to some other country that just because they may be bigger than the Philippines, they can come take away and convert the resources of the Philippine people. That’s just wrong,” he added.

But China stressed that the US is not a claimant state in the South China Sea (SCS) dispute yet it “frequently sends warships and planes to the SCS on numerous occasions for military provocations.”

The US, according to the embassy, also “goes as far as using the electronic codes of civil aviation planes of the Philippines and other regional countries to carry out espionage flights in the SCS.”

The embassy also accused the US of being the “most dangerous external factor endangering the peace and stability” in the contested waters.

“With the concerted efforts of China and ASEAN (Association of Southeast Asian Nations) countries, the situation in the SCS remains stable and is improving. We, the regional countries, have the will, wisdom and capability to properly handle the SCS issue and achieve long-term stability, development and prosperity in this region,” the embassy added.

It then urged the US to “respect China’s territorial sovereignty and maritime rights and interests in the SCS.”

“[R]espect the joint efforts of China and ASEAN countries for maintaining a peaceful and stable South China Sea and stop interfering and inciting confrontation in the SCS,” it added.

Further, the embassy said it “firmly” believes the Philippine government as well as its people “will stand on the right side of history.”

“The Philippines’ future will not float in anywhere, but will be deeply rooted in its own national development, in a stable and amicable neighborhood, and in a peaceful and prosperous Asian region,” it added.

Manila and Beijing have long been locked in a maritime dispute and in 2013, the Philippines filed a case with the Permanent Court of Arbitration (PCA) at The Hague challenging China’s sweeping claim of nearly the entire SCS, including parts of the West Philippine Sea.

In July 2016, the Hague-based court ruled in favor of the Philippines  invalidating China’s nine-dash line claim but Beijing has repeatedly refused to recognize the ruling.