Top Trump aide tells PH: US ‘not leaving’ alliance whether next White House occupant is his boss or Biden 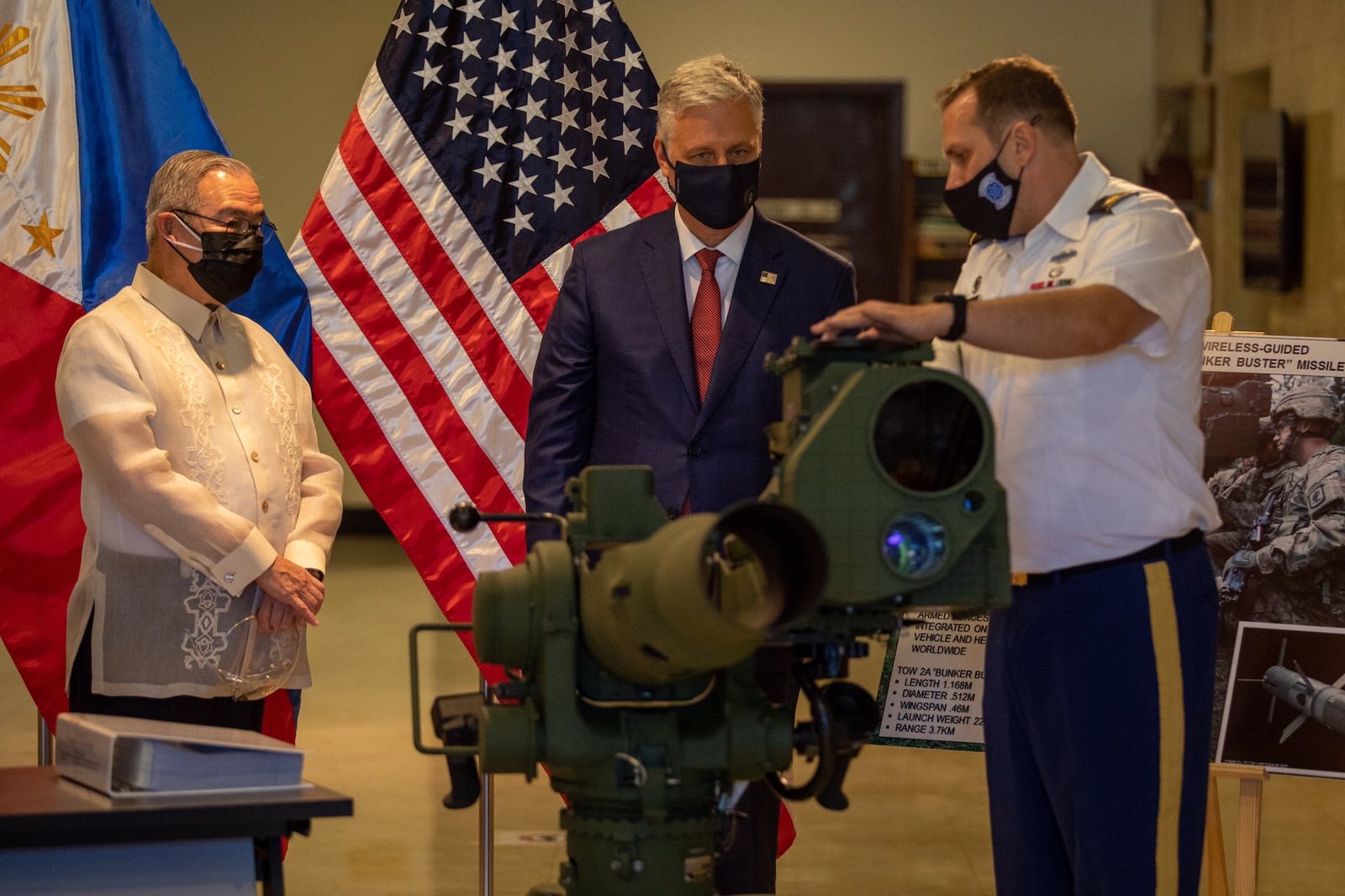 US National Security Adviser Robert O’ Brien with Foreign Affairs Secretary at the ceremonial turnover of defense articles at Department of Foreign Affairs headquarters in Manila. US EMBASSY

MANILA, Philippines—US President Donald Trump’s national security adviser raised the prospect of his boss remaining in office despite losing in the November elections as he sought to assure the Philippines and other Asian countries that there wouldn’t be any change in US alliances.

US National Security Adviser Robert O’Brien, at a press briefing after visiting the Manila American and Memorial Cemetery in Taguig City, said the United States’ alliances with its Asian partners would stay the same regardless of who occupies the White House.

But he said Trump may yet stay for another term despite election results in the US showing that Biden had won.

“On Jan. 20 we’ll have a continuity of government with either a second term for Trump or a Biden-Harris administration,” said O’Brien, one of Trump’s most loyal officials.

The Duterte administration had already congratulated Biden and Vice President-elect Kamala Harris for their victory in the November US elections.

“We’re here to let people in Asia know and let especially our close friends, like the Philippines know, America is not leaving and we’ve got your back,” said O’Brien.

“We’re here and whatever happens with our domestic policy and politics in the United States, this is a critical alliance for us and we’re going to be here to support the Philippines, irrespective of what happens politically in America,” he said.

Results of the US elections showed Biden would be the next US president but Trump refused to concede and claimed he won despite the numbers showing otherwise. Trump has also launched a widely discredited campaign to overturn the voting results by making unsubstantiated claims that he was cheated.

Biden is to be inaugurated as the United States’ next president on Jan. 20.

O’Brien, who had tested positive for coronavirus last July, visited Japan and Vietnam, too, as part of his Asia tour.

Prior to his visit to the graves of American and Filipino soldiers who fought during World War II, O’Brien announced the US was delivering precision guided missiles, worth $18 million, during his visit to the Philippine Department of Foreign Affairs office in Manila.

After a meeting with security and foreign affairs officials at DFA, US National Security Adviser Robert O’Brien visits Manila American Cemetery in Taguig City to pay tribute to American and Filipino soldiers who died during World War 2. pic.twitter.com/7QznDbRzYi

The donation, which would boost the Philippines’ anti-terror campaign, would fulfill a pledge made by Trump during a call with Philippine President Rodrigo Duterte last April.

READ: US donates $18M worth of weapons system to PH to fight terrorism

O’Brien also announced $3.5 million in humanitarian aid for survivors of a string of typhoons in the Philippines.

Defense Secretary Delfin Lorenzana said he was unable to meet with O’Brien due to a conflict of schedule, while National Security Adviser Hermogenes Esperon Jr. was not seen during the ceremonial turnover of weapons systems.

The suspension of the Visiting Forces Agreement (VFA), a security pact which was scrapped by Duterte early this year, was one of the topics at the meeting.

O’Brien said he hoped that the extended life given the VFA, which governs US troop presence in the Philippines, would be longer.

“We’d obviously like to see that longer and that’s something I spoke with Secretary Locsin about,” said O’Brien.

“We think it would be better if it was a year or longer. We’ll have to wait and see. That’s ultimately a decision for the government of the Philippines,” he said.

The VFA also allows American forces to train alongside Philippine troops on a large-scale basis and move aircraft and ships in and out of Philippine territory.

“We hope that we can get that Visiting Forces Agreement extended a bit longer but we had a very, very good discussion,” O’Brien said. “And again, President Trump welcomes the six-month extension of the suspension,” he said.

Gregory Poling, director of the Washington-based Asia Maritime Transparency Initiative, said O’Brien might be trying to make “concrete progress on VFA renegotiation.” “But it seems likely that the Duterte government wouldn’t rather wait for the new administration that’s the one Manila will have to work with,’ Poling said, referring to the incoming administration of Biden.

O’Brien, echoing US Secretary of State Mike Pompeo, reaffirmed that the 1951 Mutual Defense Treaty applies to any armed attack on Philippine forces, aircraft or public vessels in the South China Sea.

Poling said O’Brien’s visit was likely “a final trip by the outgoing administration and a way to show that they still care about partners in the region.”

“Though Trump, Pence, and Pompeo skipping the virtual Asean-related summits makes that a hard message to sell. Fact is, there’s little if anything they can get done now with less than two months to go,” he said.