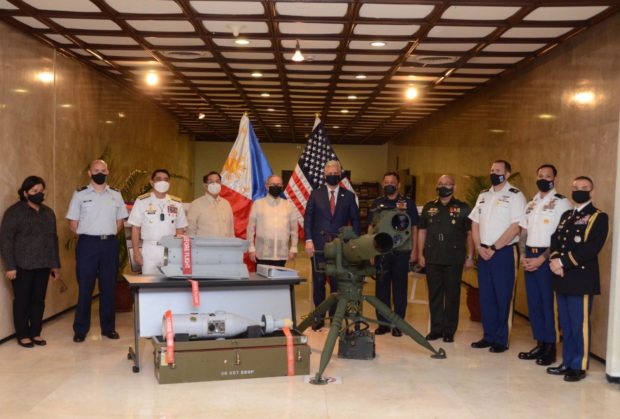 MANILA, Philippines — The United States on Monday gave the Philippines $18 million worth of weapon systems, which Manila’s top diplomat said would be used against Islamist militants in Mindanao.

“I am pleased to receive, on behalf of the Philippine government, the donation by the US government of precision guided munitions or PGMs, valued at approximately $18 million (USD),” Locsin said in his remarks.

“We look forward to training for the use of these weapons with the best and undisputed military power in the world,” he added.

Locsin said the donation was a “fulfillment of a promise” made by US President Donald Trump to President Rodrigo Duterte during a phone call in April.

A separate US military plane delivered the weapons, said O’Brien.

“This transfer underscores our strong and enduring commitment to a critical alliance. We hope our precision guided missiles and munitions will help the AFP protect Philippine lives in Mindanao and in the needless suffering imposed by ISIS-East Asia,” he said.

O’Brien is in Manila as part of a Southeast Asia tour that also included Vietnam. He is expected to discuss issues that concern both the Philippines and the US, including the South China Sea.

“Our nations share a deep interest in upholding the rule of law and the rules-based international order,” he said.

“We welcome the recent statements by President Duterte and the Secretary (Locsin) at the Asean Summit and East Asia Summit to which I participated, calling for all nations, including a certain large nation in the neighborhood to respect international law in the South China Sea,” the US official said.

O’Brien, echoing US Secretary of State Mike Pompeo’s earlier statements, reaffirmed that the 1951 Mutual Defense Treaty applies to any armed attack on Philippine forces, aircraft or public vessels in the South China Sea.

He also conveyed the message that the US welcomed Duterte’s decision to extend the Visiting Forces Agreement.

“We look forward to the VFA continuing to facilitate closer cooperation in combating terrorism,” O’Brien said, thanking Locsin for his “strong involvement” in the process.

Duterte scrapped the VFA in early 2020 after the US canceled the visa of Sen. Ronald dela Rosa, his former police chief. The VFA would have ended last August following Duterte’s decision but the President last June decided to suspend enforcement of his decision until end of 2020.

This meant the VFA would remain in effect until early 2021.

Read Next
TikTok Donates Php15M for Typhoon Victims in the Philippines
EDITORS' PICK
DOH reminder: Covid-19 vaccine ‘not a magic pill’
Acer Philippines welcomes you to its first flagship store
New Year, New Rediscoveries
DND sees AFP gaffe in UP Red-tagging
Is your company a growth champion? Stand up and be recognized!
US health officials: More data needed on UK variant warning
MOST READ
Parlade targets universities after fiasco with beauties
Why Kris Aquino sleeps with her pearls
Dustin Poirier knocks out Conor McGregor at UFC 257
AFP to apologize to UP alum falsely included in list of NPA members — Lorenzana
Don't miss out on the latest news and information.