US-PH ties ‘will not change,’ to ‘flourish’ regardless of poll results – official 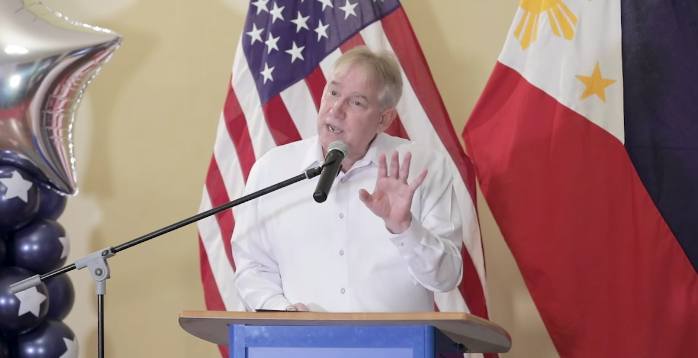 MANILA, Philippines — The alliance and friendship between the Philippine and the United States “will not change” and will only continue to grow in the future regardless of who sits at the White House.

“Beyond the results of any one election that we will see a little bit later today, beyond the triumph of any one party or any one candidate, what we celebrate today is the strength of American democracy, with all of its flaws and weaknesses and mistakes, for two and a half centuries, the American people have worked tirelessly to improve it and make our union ever more perfect. And that will not change,” Law said at the 2020 US presidential election watch event hosted by the US Embassy in Manila on Wednesday.

“And finally, today we also celebrate the strength, the vitality, and the endurance of the US-Philippine alliance and the Philippine-American friendship. I am quite confident that, too, will not change, and will only grow and flourish for many years to come,” he added.

Posted by U.S. Embassy in the Philippines on Tuesday, November 3, 2020

Law, in a speech, also expressed the embassy’s deepest sympathy and condolences to Filipinos who lost their loved ones and homes due to Super Typhoon Rolly.

“To the United States, the Philippines is more than an ally, it’s more than an economic partner.  The Filipino people are our friends, and that friendship goes back a century,” he said.

He reaffirmed that the US stands ready to help the Philippines recover from the destruction brought about by the typhoon.

Malacañang earlier expressed confidence that the bilateral relations between Manila and Washington will remain unchanged regardless of who wins this year’s US presidential elections.

While President Rodrigo Duterte has a “personal relation” with Trump, presidential spokesman Harry Roque said Manila’s chief executive will be able to establish “equally warm personal relations” with Biden if he ends up winning the US polls.

Duterte was among the notable world leaders who have been vocal about wanting Trump to serve as US president for another four-year term.

Read Next
UK to donate £1 million to aid victims of Rolly in PH, flooding in Vietnam
EDITORS' PICK
WHO: Arrival of vaccines in PH ‘a powerful step’ towards economic recovery, normalcy
PLDT Home Prepaid WiFi customers now under the care of Smart
Every Filipino home can now be a smart home with realme TechLife
QC solon pushes for early voting for senior citizens, PWDs in 2022 elections
‘Pilgrim of peace’ Pope Francis heads to war-scarred Iraq
Nestlé Philippines’ ‘NESCAFÉ Plan’ bags Grand Anvil at PRSP 56th Anvil Awards
MOST READ
Kris Aquino dispels rumors on son Josh getting married, thanks Ogie Diaz for defending him
LTO’s P500-M deal for screws draws scrutiny
Ginebra trades Slaughter to NorthPort for Standhardinger
Wesley So officially a US citizen
Don't miss out on the latest news and information.

Duque to be inoculated with AstraZeneca vaccine