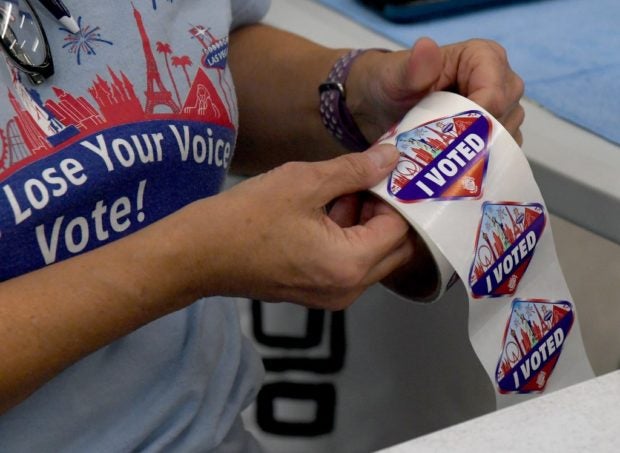 LAS VEGAS, NEVADA – NOVEMBER 03: A poll worker unrolls Las Vegas Strip-themed “I Voted” stickers for voters at a polling place at the Veterans Memorial Leisure Center on November 3, 2020 in Las Vegas, Nevada. After a record-breaking early voting turnout, Americans head to the polls on the last day to cast their vote for incumbent U.S. President Donald Trump or Democratic nominee Joe Biden in the 2020 presidential election. Ethan Miller/Getty Images/AFP

MANILA, Philippines — The Filipino-American community is “quite divided” between President Donald Trump and his Democrat opponent Joe Biden in the 2020 presidential elections there, Philippine Ambassador to the US Jose Manuel Romualdez said.

“I must say that it’s quite divided. I suppose in 2016, we had more for Trump. They just wanted a change in administration rather than having a Democrat at that time,” Romualdez said in an interview over ABS-CBN News Channel on Wednesday.

The ambassador said that there are “quite a number” of Filipino-Americans in the Northeast region of the US who are “obviously leaning towards the democratic side.”

“However, I do know a number of Filipino-Americans who are very conservative and they are still gonna vote for Trump,” he added.

According to Romualdez, there are around 4.3 million Filipino-Americans, half of which are eligible to vote in the US.

“We’re a little more cognizant that we are a force here,” he said.

Polls in US battleground states began to close Wednesday (Manila time), inching the contest between Trump and Biden to its nail-biting conclusion, following a race fought in unprecedented conditions of a global pandemic and the most deeply divided electorate in decades.

Local media and networks have also started reporting results in several states. (with a report from Agence France-Presse)