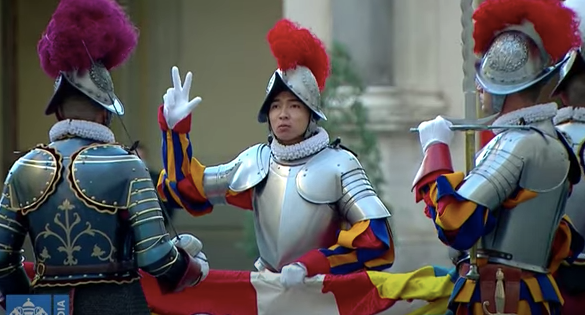 Twenty-two year-old Vincent Lüthi is one of the 38 new members of the Swiss Gaurd sworn in on Sunday, Oct. 4, 2020. Image: Screenshot from YouTube/Vatican News

MANILA, Philippines — A Swiss national with Filipino blood was sworn in at the Vatican to join the Pontifical Swiss Guard, an elite military unit tasked to protect the pope.

An article by CBCP News on Friday said 22-year-old Vincent Lüthi became one of the 38 new members of the elite corps who took an oath before Pope Francis on Sunday, Oct. 4.

According to the report, Lüthi is the only child of a Swiss and a Filipina from Sante Fe in Bantayan Island, Cebu. Lüthi was raised in Cugy, Switzerland.

The oath-taking ceremony was set to take place in May but was later postponed in October due to COVID-19 restrictions. The event was also held behind closed doors.

The Pontifical Swiss Guard was established in 1506 with the duty is protect the Vatican, the Apostolic Palace, and the pope.

To earn a spot in the ranks of the Swiss Guards, one must be an unmarried Swiss male, a Catholic and should be “top-notch,” according to the report.