Fire on tanker off Sri Lanka under control, ship towed away 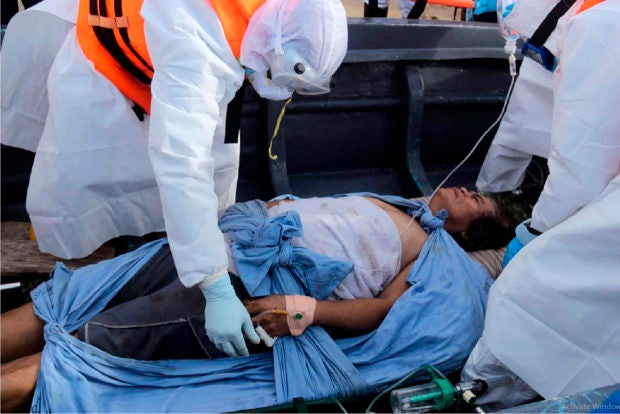 In this photo provided by Sri Lanka Navy, an injured crew member of the MT New Diamond, is transferred on stretcher to an ambulance Thursday, Sept. 3, 2020, in Sangamankanda, Sri Lanka. A flotilla from Sri Lanka and India was escalating efforts to douse a fire raging on the oil tanker east of Sri Lanka for a second day Friday. The fire started Thursday in an engine room boiler on the MT New Diamond, leaving one crew member injured and one missing.(Sri Lanka Navy via AP)

COLOMBO, Sri Lanka  — The fire on a large oil tanker off Sri Lanka’s coast has been brought under control but is still not extinguished, the navy said Saturday.

The tanker, carrying nearly 2 million barrels of crude oil, was drifting about 20 nautical miles (37 kilometers) from Sri Lanka’s eastern coast and on Friday evening a tug boat towed it to the deep sea away from land, said navy spokesman Capt. Indika de Silva.

The fire killed one of the crew and injured another. Both are Filipino.

The injured third engineer has been hospitalized in stable condition.

The fire began in an engine room boiler but had not spread to the tanker’s oil storage area and no leak has been reported, the navy said. Sri Lankan officials have warned of possible massive environmental damage to Sri Lanka’ if the ship leaks or explodes.

The head of Sri Lanka’s Marine Environment Protection Authority, Darshani Lahandapur, said Sri Lanka does not have the resources or capacity to combat such a massive disaster and had appealed for help from regional countries.

She said her organisation plans to take legal action over the fire.

The tanker had 23 crew members — 18 Filipinos and five Greeks. Twenty-one crew left the tanker uninjured as the fire burned.

The tanker was transporting crude oil from the port of Mina Al Ahmadi in Kuwait to the Indian port of Paradip, where the state-owned Indian Oil Corp. has a refinery.