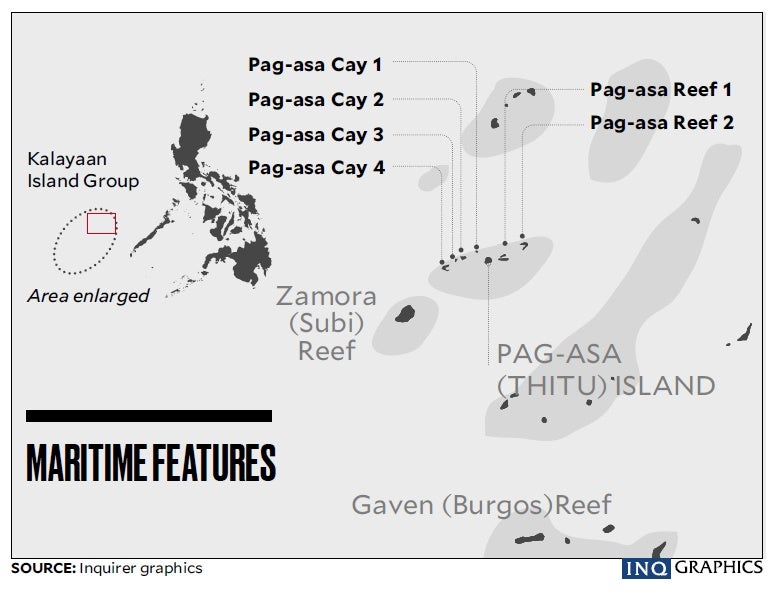 Maurice Phillip Albayda, the municipal information officer, told the Inquirer on Thursday that four sandbars and two reefs situated within the 22-kilometer territorial sea of Pag-asa Island, the municipal seat, were given formal names through Municipal Ordinance No. 50-2020 signed by Kalayaan Mayor Roberto del Mundo on Aug. 14.

The sandbars are now officially called Pag-asa Cay 1, 2, 3, and 4, from nearest to farthest point of Pag-asa Island, while the reefs were named Pag-asa Reef 1 and 2.

In an interview, Albayda said the move was in line with the town’s “vision” to develop these sandbars and reefs into possible sites for agri-tourism and fishery projects.

Pag-asa Cay 1, the largest feature, which stretches for about 500 meters, was previously referred to by Pag-asa residents as “Secret Island.” Pag-asa Cay 2 was locally called “Sandy Cay.”

Albayda said giving Filipino names to these sandbars and reefs would also uphold the country’s sovereignty and assert the validity of the Permanent Court of Arbitration (PCA) ruling in favor of the Philippines.

The July 2016 ruling invalidated China’s historical claim over the waters, including the Spratly Islands and the Philippines’ Kalayaan Island Group. China, which did not take part in the proceedings, said it did not recognize the decision.

Albayda said the town “has no intention to preempt” any plans regarding the disputed areas in the West Philippine Sea of the Duterte administration, which has taken a friendly stance toward Beijing.

The municipal ordinance was forwarded to the provincial board, which handed it to its committee on rules and laws for discussion, he said.