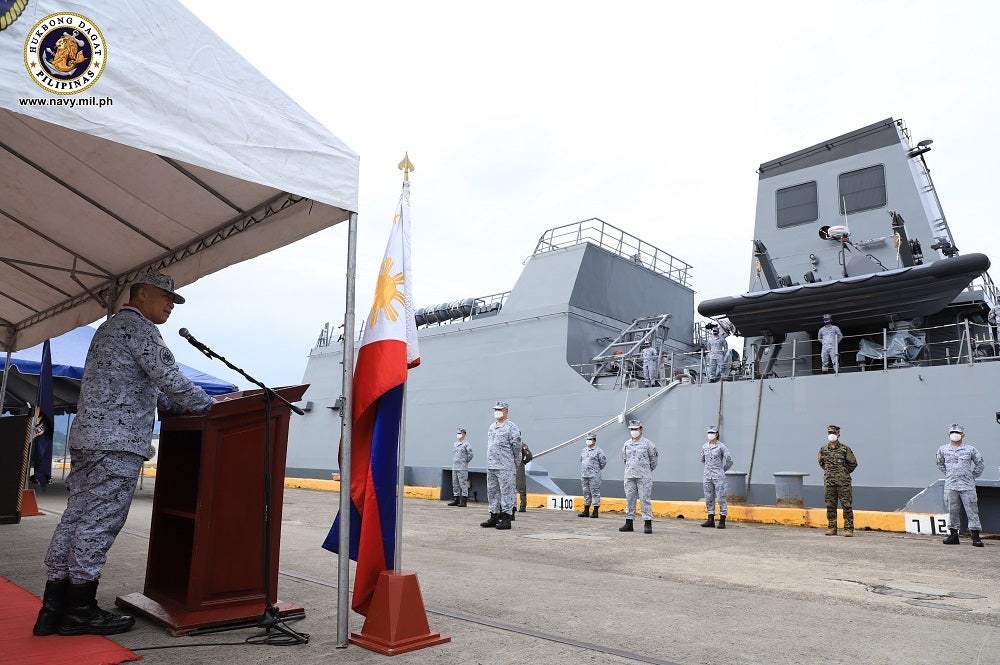 The frigate’s maiden deployment to Hawaii, site of Rimpac, would test its systems in actual conditions.

“Whatever imperfections of this ship would be drawn to the attention of the contractor while they are still in warranty period,” said Navy chief Vice Adm. Giovanni Carlo Bacordo in a speech during the sendoff ceremony for BRP Jose Rizal at Alava Wharf in Subic Bay on Wednesday (July 29).

The BRP Jose Rizal is one of two multi-role ships procured by the Philippine government from South Korean shipbuilder Hyundai Heavy Industries (HHI) worth P16 billion in 2016.

It was commissioned into service in early July before it was prepared for Rimpac.

The process to acquire the ships wasn’t smooth sailing. The selection of the combat management systems (CMS), said to be the brains of the warship, was one of the contentious issues of the frigate acquisition project back in 2017. Link 16 compatibility for the CMS was included in the contract requirements.

The Link 16 is a military tactical data link network used by the US and allies for to resist jamming and improve monitoring of battle space operations.

HHI promised in 2017 to make Hanwha Systems’ Naval Shield ICMS compatible with Link 16 by 2019 or before the first Philippine frigate was delivered.

Naval Shield ICMS has yet to be officially certified Link 16 compatible because it still has to undergo standard conformity tests, but HHI said it believes it has already displayed this capability during sea acceptance tests in South Korea in February that used a compatibility test tool.

With the backing of the South Korean government, the HHI gave a guarantee to pay for the costs if the two warships experience trouble integrating their CMS with Link 16, once they acquire this capability in the future.

“Our participation in this exercise marks the beginning of a new era of naval operations as we build up our capabilities for modern warfare,” Bacordo said.

The Rimpac would be a chance to simulate and test the capabilities of the newly-acquired platform, he added.

“This is the first time that 100 percent of the crew will be together, to gel, work as a team,” Bacordo said.

He expressed enthusiasm over the opportunities awaiting the next generation of naval officers compared to those that earlier officers had.

“I’m really happy our junior officers, our next generation of officers, will be given more opportunity with this kind of exposure more than your current leadership,” he said.

(Back then exercises lasted between five to seven days. Now, you leave today and then come back on Sept. 20. It didn’t happen in the past. That’s why the Navy now is so different.)

The biennial Rimpac is scheduled from Aug. 17 to 31. Because of the COVID-19 pandemic, the exercises will be an at-sea event and shore-based activities will be at a minimum.

Other countries that will participate included Japan, Australia and South Korea. It is not expected to be a large-scale event like in previous years because of the ongoing health crisis.

The Philippines seeks to boost its military alliance and capabilities by joining the Rimpac. The drills come in the wake of US rejection of Chinese territorial claims in the South China Sea, which Beijing wants to grab entirely.