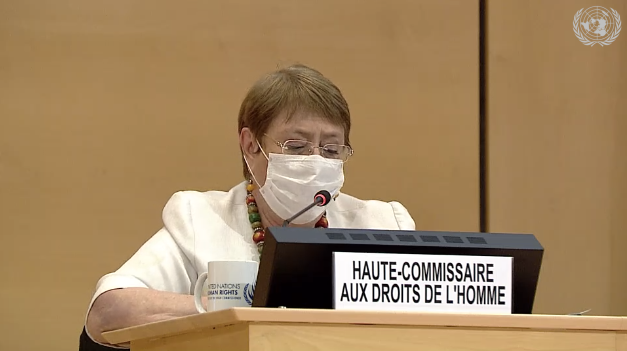 UN High Commissioner for Human Rights Michelle Bachelet presents report on the human rights situation in the Philippines during the 44th regular session of the UN Human Rights Council in Geneva, Switzerland on Tuesday, June 30, 2020. Screengrab from UN Web TV

MANILA, Philippines — Several member states of the UN Human Rights Council (UNHRC) called on the Philippine government to promptly address the “widespread” and “systematic” drug war killings in the country.

This developed as they expressed alarm over the findings of the Office of the High Commissioner for Human Rights (OHCHR) about the Philippines’ human rights situation.

The Philippines, however, rejected allegations that there is impunity in the country’s judicial system or a “lack of accountability” for human rights violations.

In a speech delivered in the UNHRC’s 44th regular session in Geneva, Switzerland on Tuesday, UN High Commissioner for Human Rights Michelle Bachelet said the Duterte administration’s war on drugs has been “widespread and systematic.”

She added that the country’s drive against illegal drugs is being enforced “without due regard for the rule of law.”

Bachelet said this as she presented her office’s report on the human rights situation in the Philippines.

The comprehensive report released on June 4 was mandated by an Iceland-initiated resolution. The UNHRC adopted the said resolution in July 2019.

“The findings of the report are very serious…The report finds that the killings have been widespread and systematic and they are ongoing. The report also finds that serious human rights violations including extrajudicial killings have resulted from key policies driving the so-called war on drugs and incitement to violence from the highest levels of government,” she told the UNHRC.

“The campaign against illegal drugs is being carried out without due regard for the rule of law, due process and the human rights of people who may be using or selling drugs. The report finds that the killings have been widespread and systematic and they are ongoing,” she added.

While the Philippine government cooperated during briefing submissions and several meetings, Bachelet said her team was “not granted access to the country in relation to the mandate.”

Her office, meanwhile, received “hundreds of submissions from organizations and individuals across the Philippines.”

Bachelet also said the report found “near-total impunity” in the government’s handling of the drug war, which she noted indicated the “unwillingness by the state to hold to account perpetrators of extrajudicial killings.”

“Families of the victims, understandably, feel powerless, with the odds firmly stacked against justice. Moreover, by senior government officials’ own admission, the draconian campaign has been ineffective in reducing the supply of illicit drugs,” she told the council.

“While the Philippines have made some progress in the advancement of economic and social rights, indigenous peoples and farmers continue to be caught in a tug of war between powerful businesses, and political interest,” she added.

Both the government military and non-state armed forces, such as the New People’s Army “are also responsible for abuses,” according to Bachelet.

“Despite progressive legislation, the rights of indigenous people, the right to education, and to other basic economic and social rights remain elusive for many remote communities,” she also said.

The UN human rights chief also mentioned some of the report’s recommendations to the Philippines.

“Our office is ready to strengthen our constructive engagement on the basis of the report’s recommendations, we have identified several areas for further cooperation with the government, including a strengthening domestic accountability mechanism, improving data gathering on alleged police violation, review of legislation and policies on drug control and terrorism and help to bridge gaps between civil society and state authorities,” she said.

She then urged the UNHRC to “remain active and vigilant” on the human rights situation in the Philippines by mandating her office to continue monitoring and reporting on the matter.

“The state has an obligation to conduct independent investigations into the grave violation we have documented. In the absence of clear measurable outcomes from domestic mechanisms, the council should consider options for international accountability measures,” Bachelet said.

Moreover, she expressed hopes that the report would “mark the beginning of the end of impunity for serious human rights violations in the Philippines.”

“The families of victims and the country’s courageous human rights defenders count on the international community for help to address these ongoing and serious human rights issues and for the council to rise up to its prevention mandate,” Bachelet noted.

“It is not enough to argue that the government’s heavy-handed policies remain popular in the country. Because victims tend to be from lower socio-economic classes and relatively disempowered communities and there’s even a stronger imperative to ensure the protection,” she further said.

Following Bachelet’s presentation, some UNHRC members states said they were “deeply concerned” over the findings stated in the report.

“Canada is deeply concerned by the finding that drug campaign-related killings appeared to be widespread and systematic in nature,” Canada’s representative said.

“We noted that some administrative measures have been imposed, including the dismissal of some police officers. However, misconduct and criminal action must also be addressed,” Canada added.

Likewise, Belgium said it was “shocked” by the allegations of “widespread and systematic extrajudicial killings and arbitrary detentions in the context of the campaign against illegal drugs.”

“We call on the Philippines to ensure prompt independent and credible investigations. Those responsible for human rights violations must be held accountable. Your findings on the lack of adequate human rights safeguards in the national security legislative framework, the phenomenon of red-tagging and intimidating, and sometimes even lethal impact, thereof, on civic space and on human rights defenders are equally of great concern,” Belgium said.

On the other hand, some countries did not agree with the findings in the report.

Further, China said it was against using resolutions “to exercise pressure on member states.”

Meanwhile, Russia said each country “must resolve their rights issues themselves.”

“The international community, meanwhile, must merely assist when it is requested and when there is consent. We welcome the Philippines’ efforts and measures taken to improve the human rights situation and it has informed in detail the Human Rights Council and other bodies on their progress,” the representative of the Russian Federation said during the session.

Nevertheless, Bachelet committed to assisting the Philippines and “closely” monitor the human rights situation there “to see if there are real and concrete results.”

She then underscored the need for the Philippine government to use a health approach in addressing the country’s drug problem.

Responding to the report as well as to the statements of some member states, Justice Secretary Menardo Guevarra urged concerned delegations to consult the Philippine human rights situationer, where he said the government “exhaustively addressed specific cases.”

“Certain so-called ‘emblematic’ cases have been cited and selectively used to make hasty conclusions about the situation of civic space, press freedom, and judicial independence,” Guevarra, who joined the session online, said.

“While the international community upholds the independence of the judiciary and welcomes the court’s decisions on many cases, such as the conviction of 53 public officials involved in the Maguindanao massacre, it regrettably entertains allegations of the court’s partiality on processes and decisions in specific cases.”

“Logic should be consistent on the principle of the equal application of law and in making judgments about the independence of the judiciary, and the outcomes of judicial processes,” he also said.

“We should take great care against concluding that certain situations are systemic or cases emblematic,” he pointed out.

“In the Philippine situation, where the option of writing every possible wrong, evidently and vigorously exists, there is no reasonable basis to allege impunity or lack of accountability for human rights violations,” he added.

He told the council that the Philippine government is determined to strengthen its national efforts to “safeguard our vast and robust civil society and media space, strengthen the administration of justice and address all claims and allegations case by case in a transparent and inclusive manner.”

“At the same time, we highlight our commitment to continue to contribute collective efforts, aimed at enhancing and upholding the integrity and objectivity of the council and its processes and mechanisms to ensure that its work leads only to transformative and enduring impact on the ground,” he likewise noted.

Read Next
DFA: COVID-19 cases among overseas Filipinos now at 8,506 with 32 new infections
EDITORS' PICK
Smart poised to turn PH into ‘Smart 5G country’ with nationwide rollout
Water remains our saving grace right now
Get 80% OFF Ignite 2020 Cyber Tickets starting 28 September
House to probe Facebook takedown of gov’t accounts
Feud is over: Velasco next Speaker on Oct. 14
Duterte meets with Cayetano, Velasco amid speakership issue
MOST READ
Velasco to take over as Speaker on Oct. 14
‘I offered to resign’ because of endless corruption, says Duterte
Duterte will ask Congress to abolish PhilHealth
LOOK: The Mountain from ‘Game of Thrones’ welcomes first son with wife
Don't miss out on the latest news and information.