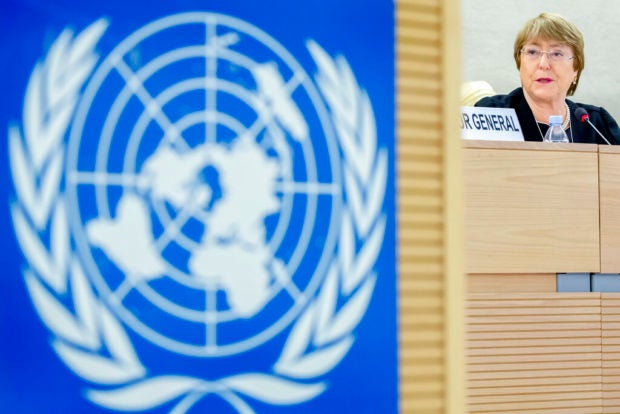 FILE – U.N. High Commissioner for Human Rights Chilean Michelle Bachelet speaks during the opening of the 41st session of the Human Rights Council, at the European headquarters of the United Nations in Geneva, Switzerland, Monday, June 24, 2019 (Magali Girardin/Keystone via AP)

MANILA, Philippines — The United Nations Human Rights Council (UNHRC) has adopted a resolution that would prompt the body to look deeply into the human rights situation in the Philippines, including drug war killings.

During its 41st session in Geneva, 18 of the 47 members states that make up the human rights body voted in favor of the draft resolution, filed by Iceland on behalf of more than two dozen nations, which formally asked High Commissioner on Human Rights Michelle Bachelet to prepare and present a “comprehensive written report” on the human rights situation in the Philippines.

Fourteen voted no and 15 states abstained.

In introducing the draft resolution before the rights council, Iceland denied any intent of confrontation with the Philippines and said it applies an “objective criteria in determining if a situation warrants a council attention or action.”

“We bring this resolution not because we seek confrontation, that is never Iceland’s preferred approach. We have tried to engage constructively on this issue for more than two years since 2017, Iceland had led three statements on the Philippines in this council expressing our serious concern…,” Harald Aspeund, Iceland’s representative, said.

“We have engaged with the Philippines bilaterally over the past two years…We have remained open to constructive engagement and dialogue throughout,” he added.

Meanwhile, Pakistan, one of the 15 states that abstained, said it noted the judgment made by the Philippines’ high judiciary “in relation to the conviction of high-ranking officials” which it said shows that state institutions “are functioning in carrying out their due diligence.”

“Our delegation appreciates the Philippines for their engagement with [United Nations] member states and sharing of information on the steps taken to ensure accountability and respect for human rights,” Pakitan’s Tahir Hussain Andrabi said.

The draft resolution called on the Philippine government to “take all necessary measures to prevent extrajudicial killings and enforced disappearances” and to conduct “impartial investigations and to hold perpetrators accountable in accordance with international norms and standards including due process and the rule of law.”

It likewise recalled the “repeated expressions of concern” coming from Bachelet herself and the human rights council’s special procedure mandate holders about the human rights situation in the Philippines.

The Iceland-initiated draft resolution, however, did not sit well with Malacañang.

“We already made our stand,” Panelo told reporters in Malacañang last week.

The Palace spokesman also said that those who “initiated” the resolution “are believing in the false news, false information.”

“For example, if you’re being accused of something that’s not true, human nature dictates that you prove that the accusation is not true,” she earlier said during her weekly radio program.

“In this case, we are being accused. Instead of us showing that the accusation is not true, we are saying: ‘Don’t meddle with us’,” she added.

Robredo also said it was “embarrassing” that other countries seemed to be more concerned over the drug war killings in the country than most Philippine officials.

“Other countries are concerned about us. But here, it seems only a few are concerned. It’s like business as usual for everyone. Despite so many killings happening, it’s like nothing is happening,” Robredo, speaking in Filipino, said.