US flexes naval muscle as Asean gets tough vs China 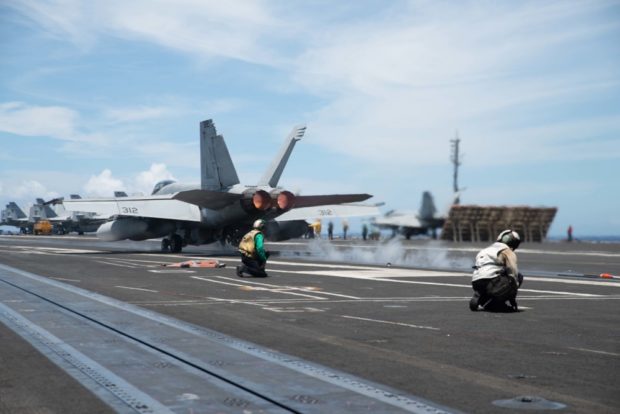 The USS Nimitz and USS Ronald Reagan carrier strike groups started joint drills in the Philippine Sea on Sunday (June 28), the US Navy 7th Fleet said in a news release.

The US Navy said it “regularly conducts integrated strike group operations to support a free and open Indo- Pacific, and promote an international rules-based order wherein each country can reach its potential without sacrificing national sovereignty.”

“Dual carrier operations demonstrate our commitment to regional allies, our ability to rapidly mass combat power in the Indo- Pacific, and our readiness to confront all those who challenge international norms that support regional stability,” said Rear Admiral George Wikoff, commander of Carrier Strike Group 5.

The combined operations of the two carriers, the second this month, came a day after Asean member states said in a statement issued by Vietnam that the 1982 United Nations Convention on the Law of the Sea (Unclos) should be the basis of sovereign rights and entitlements in the South China Sea.

“Unclos sets out the legal framework within which all activities in the oceans and seas must be carried out,” it said on Saturday (June 27).

The Asean statement came as China planned to control the airspace over the South China Sea, which Philippine Defense Secretary Delfin Lorenzana had described as a dangerous move.

Asean leaders held their annual summit through a video conference on Friday (June 26). Vietnam led the drafting of the chairman’s statement as the Asean host for 2020.

China is laying claim to the entire South China Sea based on its nine-dash line. Parts of what China is claiming lie tens of thousands of nautical miles away from the Chinese mainland.

The mythical nine-dash line had been rejected as illegal and without basis in 2016 by the Permanent Arbitration Court in a case filed by the Philippines. Vietnam, Malaysia and Brunei also have claims in the area.