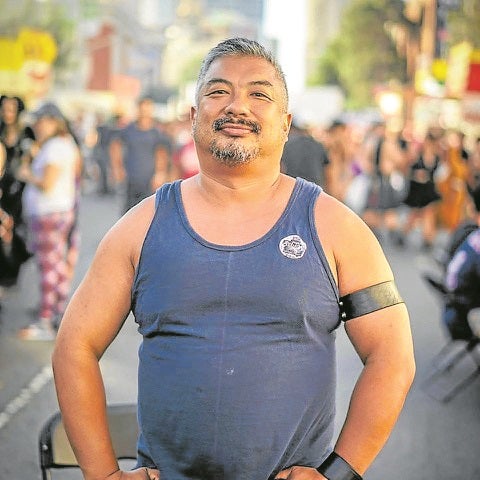 On June 9, 50-year-old Filipino-American James Juanillo was confronted by a white couple for stenciling “Black Lives Matter” on the front retaining wall of a house in the affluent Pacific Heights neighborhood in San Francisco, California.

Juanillo recorded the encounter on his phone, hoping to use the interaction to shed light on the subtle forms of racism that, he said, he had encountered frequently.

The proudly gay Filipino who has lived in his house for 18 years said he knew what it felt to be discriminated against.

“I’m a person of color in Pacific Heights, this is maybe San Francisco’s richest, whitest hood. This isn’t the first time I’ve experienced fear and maybe even a little bit of loathing,” he explained.

It’s private property, businesswoman Lisa Alexander and her husband Robert Larkins had told Juanillo, with Alexander claiming that she knew the house owner.

Juanillo challenged them to call the police if they thought he was doing something against the law. They did.

“She decided to call men with guns because of my chalk art” that could easily be washed off by rain, Juanillo told CBS News last week.

After posting the video, now at over 23 million views, Juanillo’s Twitter following went from under 50 to more than 25,000.

“I have been moved and touched by the many heartfelt responses to the events of last week in front of my home,” he said in a statement to the Inquirer.

According to Geraldine Alcid, director of Bay Area-based nonprofit Filipino Advocates For Justice, Juanillo’s experience was not an isolated incident.

“As a Filipina who has also experienced being made to feel like I didn’t belong because of how I look, Mr. Juanillo’s interaction resonated deeply,” Alcid said. “It demonstrates how Filipinos and other Asians—regardless of being upheld as the model minority—are still ‘othered’ despite having roots in the US.”

George Floyd’s death, which sparked protests against police brutality in the United States and around the nation, also prompted among Asian-Americans a particular discourse regarding anti-Blackness within the Asian community.

Tou Thao, the Hmong police officer who stood by while white police officer Derek Chauvin knelt on Floyd’s neck, is the most recent subject of scrutiny highlighting this racial divide.

“This traumatic injustice of lost Black lives at the hands of police ignites a fury for some, and indifference or disdain from others in our Filipino immigrant community,” Alcid said. “As Filipinos, we must face our own reckoning with anti-Blackness in our own community. Many difficult conversations are happening in our homes and on social media.”

Tension between Asian-American and Black communities is nothing new. During the Los Angeles riots in 1992 following the acquittal of an LAPD officer caught on camera brutally beating Rodney King, a Black man, many Korean-owned businesses were damaged during the protests. The animosity between Asians and Blacks was further ignited when a Korean liquor store owner shot and killed a 15-year-old Black girl named Latasha Harlins for trying to steal a $1.79 bottle of orange juice.

“Black people’s struggle is inextricably linked to our struggles as Filipinos who are also fighting against the same institution of American imperialism and repression,” Aguas said. “Solidarity is the people’s strongest weapon and we should all be fighting for an end to systematized and institutionalized racism.”

Despite the “model minority” myth which perpetuates stereotypes of Asians as “polite” and “successful” immigrants, Asian Americans too have suffered violence at the hands of white men.

In 1975, 27-year-old Peter Yew was beaten severely by New York City police officers in Chinatown. In 1982, Chinese-American Vincent Chin was beaten to death by white men in Detroit who thought he was Japanese. In 2007, 18-year-old Hmong-American Chonburi Xiong was fatally shot 27 times in his home by white policemen.

The Civil Rights movement of the 1950s and 60s, which was pioneered by Black activists, allowed for the passage of the 1965 Immigration Act, lifting immigration quotas for Asians in the United States. According to Alcid, this legislation “still profoundly affects our rooted history as Asians in the US.”

“While our families may not know this history, we have benefited from this legacy of fighting for freedom,” Alcid said.

Organizations like Filipino Advocates for Justice are working to combat anti-Blackness with events like Tatlong Bagsak for Black Lives, a symposium that took place recently and which tackled anti-Black racism within Asian-American organizations and communities.

After receiving a wave of outrage following the release of Juanillo’s video, Alexander apologized publicly and took her company LaFace Skincare’s website offline. It lost a client—the beauty product subscription service called Birchbox—which released a statement condemning her actions in the video.

Larkins has since been fired from the wealth management firm Raymond James, with the company also releasing a statement denouncing the couple’s actions.

As for Juanillo, he said he continued to work toward illuminating instances of subtle racism in his community and at large.

“Our country and our world are in the midst of a great and long overdue reckoning about race and social justice in the middle of an historic pandemic,” he said.

“My hope is that this event becomes a teachable moment that will lead to more open dialogue and less long held assumptions; to more respect and less violence.”

TAGS: Fil-Am viral video, James Juanillo, racism against Asians, racism in the US