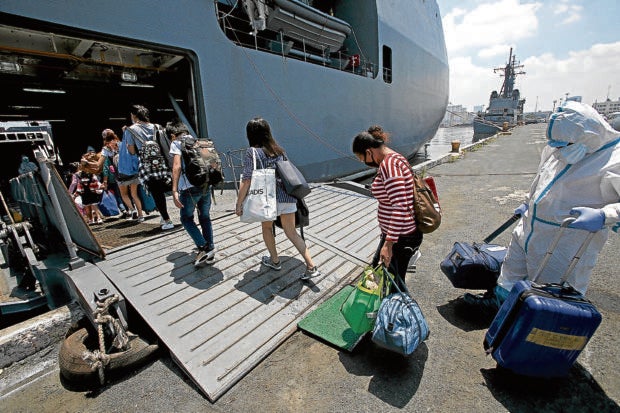 HEADING HOME, FINALLY Around 500 Filipinos bound for their provinces in the Visayas but got stranded in Metro Manila when the metropolis was locked down to contain the coronavirus board a Philippine Navy ship at Manila’s South Harbor on Sunday, finally on their way home. —RICHARD A. REYES

MANILA, Philippines — Malacañang on Sunday said the bodies of 232 overseas Filipino workers (OFWs) who died of various causes in Saudi Arabia would be flown back to the Philippines.

But presidential spokesperson Harry Roque said at least 50 other Filipino migrants who died of COVID-19 would be buried in Saudi Arabia in deference to the “host country’s local customs,” as reported by the Department of Labor and Employment.

“We offer our prayers to the deceased and to those they left behind,” Roque said in a statement.

“Concerned agencies of the government have already been directed to extend assistance to their families,” he added.

Earlier on Sunday, Labor Secretary Silvestre Bello III told the Inquirer in an interview that Saudi Arabia had originally given the Philippines 72 hours to bring the bodies home.

But he appealed on humanitarian grounds, asking for the repatriation of the bodies in batches and the burial of the COVID-19 dead in Saudi Arabia.

Bello said he had received information that the Philippine request had been granted. “I think we were given more time. There was already an advisory that the 72 hours [had] been extended. That’s the information we got,” he said.

“Right now, there is lockdown there. But we’re trying to arrange for transportation,” Bello said, adding that once the situation allowed it, the bodies would be flown home on charter flights.

Bello also said he had requested Sen. Richard Gordon, the Philippine Red Cross chief, to intercede with the Saudi Red Crescent for help in repatriating the bodies of the Filipino migrants.

He said the families of the workers who died of COVID-19 would be informed of the decision of the Inter-Agency Task Force for the Management of Emerging Infectious Diseases not to bring the bodies home.

“We cannot do anything about that … We cannot bring them home for health reasons,” Bello said.

The labor department said a fresh batch of 277 displaced migrant workers from North Africa would arrive in Manila on Monday.

Labor Attaché Adam Musa said the repatriates, including dependents, from Libya, Tunisia and Algeria would arrive on a special Philippine Airlines flight.

The same flight would bring home the bodies of migrants Herminia Sablay Estrada and Glenna Deza, both of whom died of heart attack in Libya.

Musa said the repatriates had been employed in the oil and health-care industries but had either finished their contracts or been laid off due to coronavirus shutdowns.

Bello gave assurance that the government would give assistance to the displaced workers.