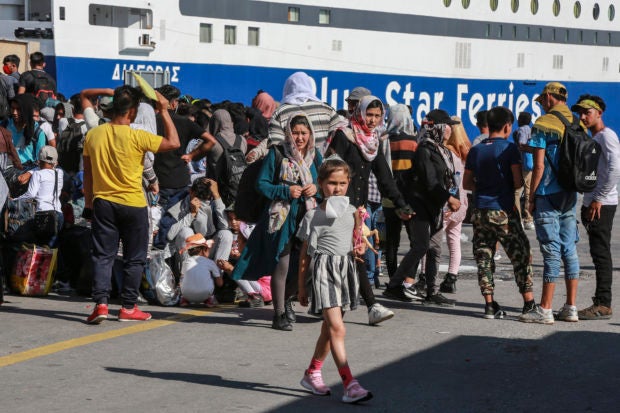 Migrants gather at the port of Mytilene in the island of Lesbos after receiving a paper for free movement in the mainland of Greece, on June 10, 2020. (AFP)

NICOSIA, Cyprus  — The European Union must forge a common migration policy that obligates member states to take in a proportional number of asylum-seekers and restricts EU funding access to any country that refuses, Cyprus’ interior minister said Thursday.

Nicos Nouris said it’s “imperative” for the 27-member bloc to come up with a deal when EU interior ministers tackle the issue next month that takes the pressure off front-line states like Greece, Italy, Spain and Cyprus, which receive the most migrants.

Unveiling the key points to Cyprus’ migration policy overhaul, Nouris said the EU also needs to negotiate agreements with nations like Afghanistan, Nepal, Pakistan and India to take back citizens who have had their asylum applications rejected.

Nouris suggested Cyprus may negotiate such agreements on its own if an overall EU deal falls through.

The minister said the bloc should compel Turkey to live up to a 2016 agreement to keep refugees within its territory.

Nouris repeated that Cyprus leads the EU in the number of asylum-seekers it hosts relative to its population of roughly 880,000. About three out of four migrants that Cyprus takes in arrive through the ethnically split country’s breakaway Turkish Cypriot northern part and cross a U.N.-controlled buffer zone to enter the internationally recognized south.

He said key to Cyprus’ revamped migration policy is to slash the time it takes to process asylum applications — from years in some cases to a maximum of 50 days — in order to clear up a huge backlog. Nearly 20,000 asylum applications are still pending.

Nouris said asylum applications from citizens of 21 “safe” countries, including Egypt, Nigeria, Bosnia the Philippines and Vietnam, will be proactively considered “baseless” unless applicants can prove that their lives would be in danger if they return.

Draft legislation expected to be approved next month amends the constitution to cut the time asylum-seekers have to appeal their rejected claim, from 75 days to 15.

To stem the burgeoning number of foreign students enrolled in Cypriot colleges who apply for asylum, Nouris said they’ll now need bank documents proving that they can pay for the first year of tuition and to sign a declaration that they’re not in danger in their own country.

“Those who deceive the system and remain in our country without facing any danger if they return to their own homeland are denying resources from those who truly face danger if they go back,” Nouris said.