China has promised to give the Philippines “priority” access to a vaccine it is developing against the new coronavirus disease (COVID-19), Malacañang said on Friday.

“President Xi reiterated China’s commitment to the international community to make any vaccine it develops a global public good and that as a friendly neighbor, China certainly considers the Philippines as a priority,” Malacañang said in a statement.

The President “emphasized the imperative of making vaccines accessible and affordable to all countries, including the Philippines,” it said.

Mr. Duterte has been warming ties between Beijing and Manila since he took office in 2016 by setting aside the international arbitral tribunal ruling in favor of the Philippines that invalidated China’s expansive claims over the South China Sea. 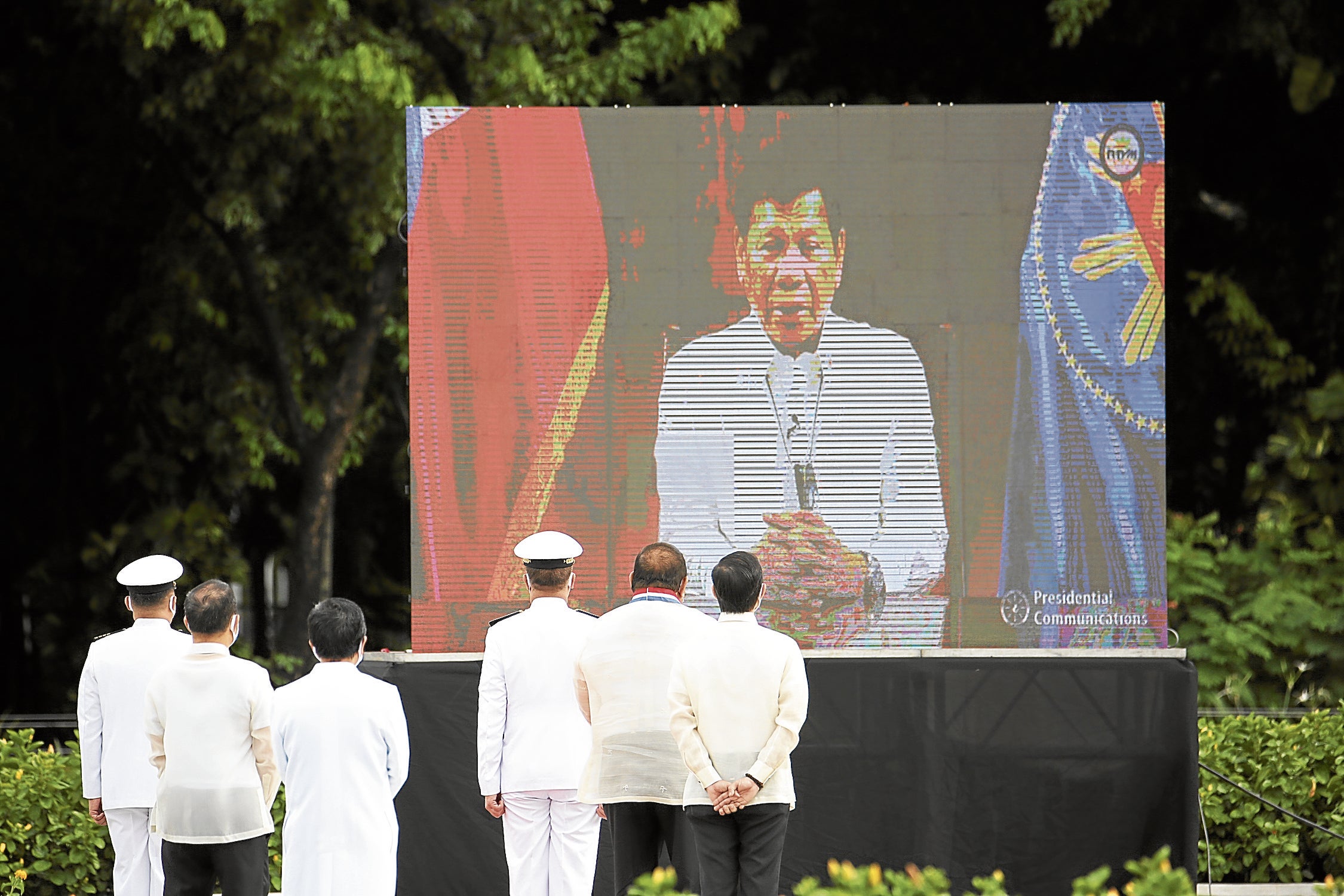 PHONE CALL President Duterte on Thursday night spoke on the phone with Chinese President Xi Jinping who assured Filipinos they will get priority access to a COVID-19 vaccine China was developing. Mr. Duterte is shown here delivering his Independence Day message to the nation via a television hookup from Davao City to the ceremonies held at Rizal Park in Manila on Friday. —NIÑO JESUS ORBETA

Mr. Duterte received Xi’s commitment to ensure supply chain connectivity in critical medical supplies and equipment and the free flow of goods, and the resumption and completion of priority infrastructure projects in the Philippines.

For his part, Xi thanked the Philippines for supporting China’s own fight against COVID-19 through its “goodwill donation” to the city of Wuhan, the capital of central China’s Hubei province where SARS-CoV-2, the virus that causes the severe respiratory disease, originated.

Malacañang said Xi described this as one of the Philippines’ “acts of kindness that shall be returned many times more.”

The Chinese state-run Xinhua news agency reported early this month that China’s inactivated COVID-19 vaccine was expected to complete clinical trials and could be ready for the market as early as the end of this year or early next year.

It said China National Biotec Group (CNBG), a subsidiary of the China National Pharmaceutical Group (Sinopharm), had two such vaccines under Phase-2 clinical trials and had increased its vaccine production capacity.

More than 2,000 people had received the vaccines, and clinical data verified their safety and efficacy, the report said.

CNBG had built a plant that could produce 100 to 120 million of the vaccines yearly and another factory in Wuhan will be completed by the end of June or early July for a combined capacity of 200 million per year, the report said.

At the Department of Health (DOH), official data on Friday showed that the number of confirmed COVID-19 cases in the Philippines was still rising with an additional 615 cases, pushing the national total to 24,787.

These included 336 who tested positive within the last three days. Metro Manila, with 97, accounted for the most number followed by Central Visayas which had 92.

The DOH recorded the biggest single-day increase in recovered patients of 289, bringing the total to 5,454.

The health department has created two additional subgroups that will be tested for the virus but persons classified under these subgroups will not be immediately tested, according to Health Undersecretary Maria Rosario Vergeire.

“Even if you are included in the subgroup, you should still have had close contact with a probable or confirmed COVID-19 case before undergoing testing,” she said.

One, called Subgroup E, are front-liners indirectly involved in the health response against COVID-19. They include persons manning temporary treatment facilities, quarantines, control points and swabbing centers; members of the national/regional/local risk reduction and management teams; barangay health emergency response teams and members of barangay officials providing barangay border control; personnel from the Bureau of Corrections and Bureau of Jail Management and Penology, and social workers doing relief efforts and other COVID-19-related tasks.

The other, Subgroup F, includes other vulnerable persons—pregnant women about to give birth, dialysis and cancer patients and persons living with HIV; those who will undergo high-risk, elective surgery, and prisoners and others living in confined spaces. —WITH A REPORT FROM JOVIC YEE AND XINHUA