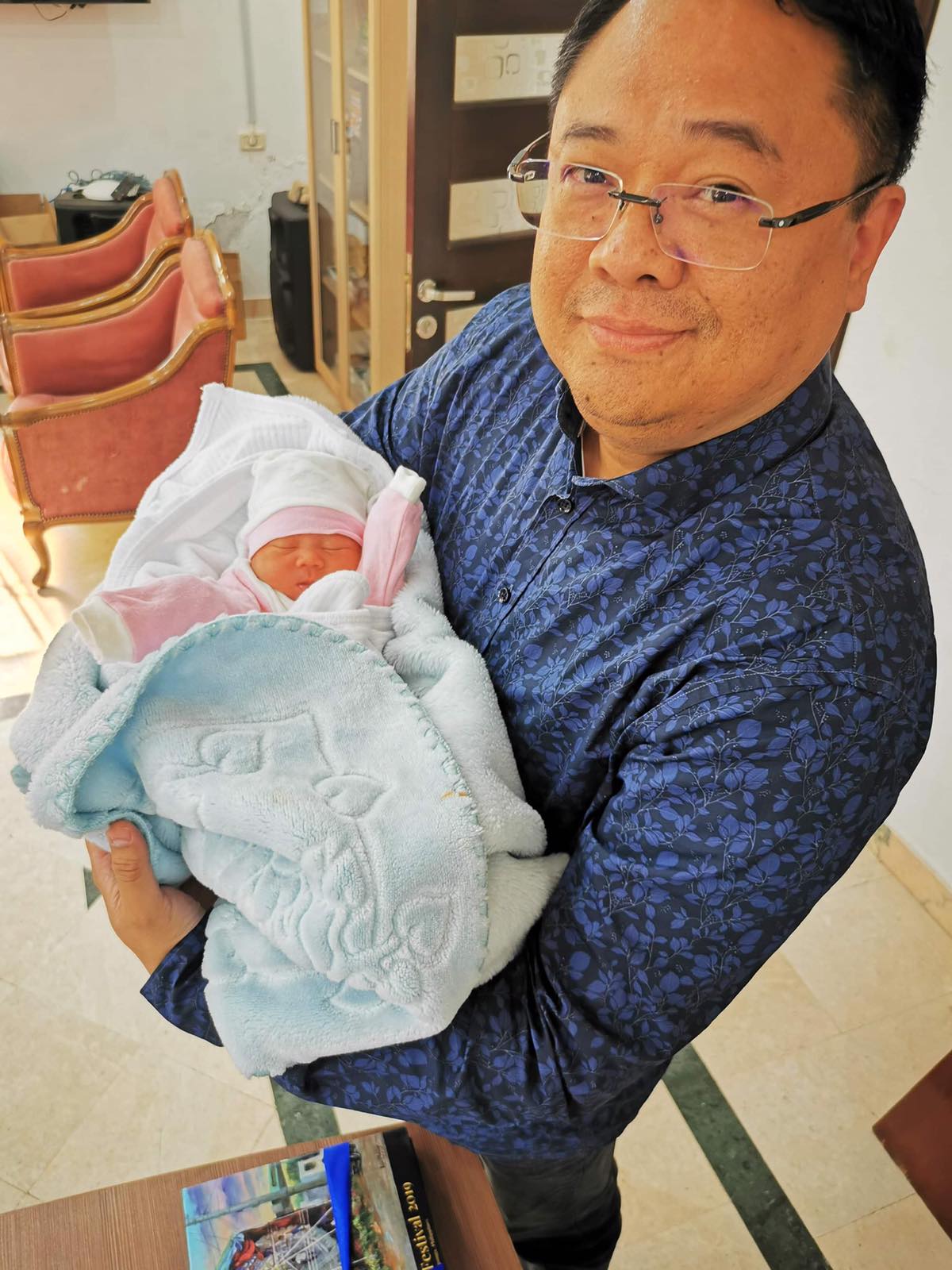 Philippine Embassy in Libya Chargé d’Affaires Elmer Cato with baby Sarah Gabrielle Felisa, nicknamed “Gabgab”, when she was brought to the embassy by a Filipina. Image: Courtesy of Elmer Cato.

MANILA, Philippines — A two-month-old baby girl became the youngest distressed Filipino assisted by the Philippine Embassy in Libya, as she was separated from her mother a few minutes after being born.

In a Facebook post by Chargé d’Affaires for the Philippine Embassy in Libya Elmer Cato on Saturday, it showed that the baby, named Sarah Gabrielle Felisa or “Gabgab,” was being baptized on the premises of the embassy.

Cato’s post also read that the men and women of the embassy — including him — stood as the baby’s godparents.

According to Cato’s post, both baby Gabgab and her mother encountered a few bumps on the road before they could be together.

“She was just three days old when the Embassy took her into its custody. She was separated from her mother shortly after birth and there was no one here to look after her. That is how she became the youngest distressed Filipino we have ever assisted,” Cato said in his post.

She was just three days old when the Embassy took her into its custody. She was separated from her mother shortly after…

According to Cato, Gabgab’s mother was not aware that she was pregnant when she left the Philippines to work as a domestic helper late last year.

“The mother had no choice but to go abroad as she had to pay the hospital expenses of her ailing husband who unfortunately passed away a few weeks after she left the Philippines,” Cato said.

In a Viber message to INQUIRER.net, Cato added that the baby’s mother, who is an undocumented worker, first went to Dubai where her employer was based, but later moved to Libya — a country not only affected by the coronavirus pandemic but faces a raging civil war.

And when the baby was born on Feb. 19 at the home of her mother’s employer, both mother and daughter only had a few minutes to spend together when they were taken to the hospital.

“The next day, they were separated after the employer took the mother home but not the baby. The employer did not want the baby in her household,” the diplomat said in his post.

Gabgab was then passed on from one person to another until another Filipino reached out to the embassy and brought the baby to them.

“We took the baby under our protective custody. We knew mother and child have to be together so we immediately went looking for her mom,” Cato said about how they were able to reunite mother and daughter.

“We found her a few days later and got to reunite the two after successfully negotiating her release from her employer. Mother and daughter have since been under our care.”

Due to the ongoing civil war, Tripoli and other nearby areas are still under Alert Level 4—meaning mandatory repatriation—raised by the Department of Foreign Affairs since May 2019.

However, the Philippine Embassy in Tripoli said that, along with Gabgab’s mother, an estimated 2,300 overseas Filipino workers remain in the embattled Libyan capital.

“Risk of Filipinos becoming collateral damage is quite high,” Cato told INQUIRER.net. “We need to keep praying for their protection.”

And the chargé d’affaires for the embassy assured that baby Gabgab and her mother will be safe in their hands until they are repatriated once travel restrictions due to the coronavirus pandemic are eased.

Young entrepreneur shows way to do business in COVID era