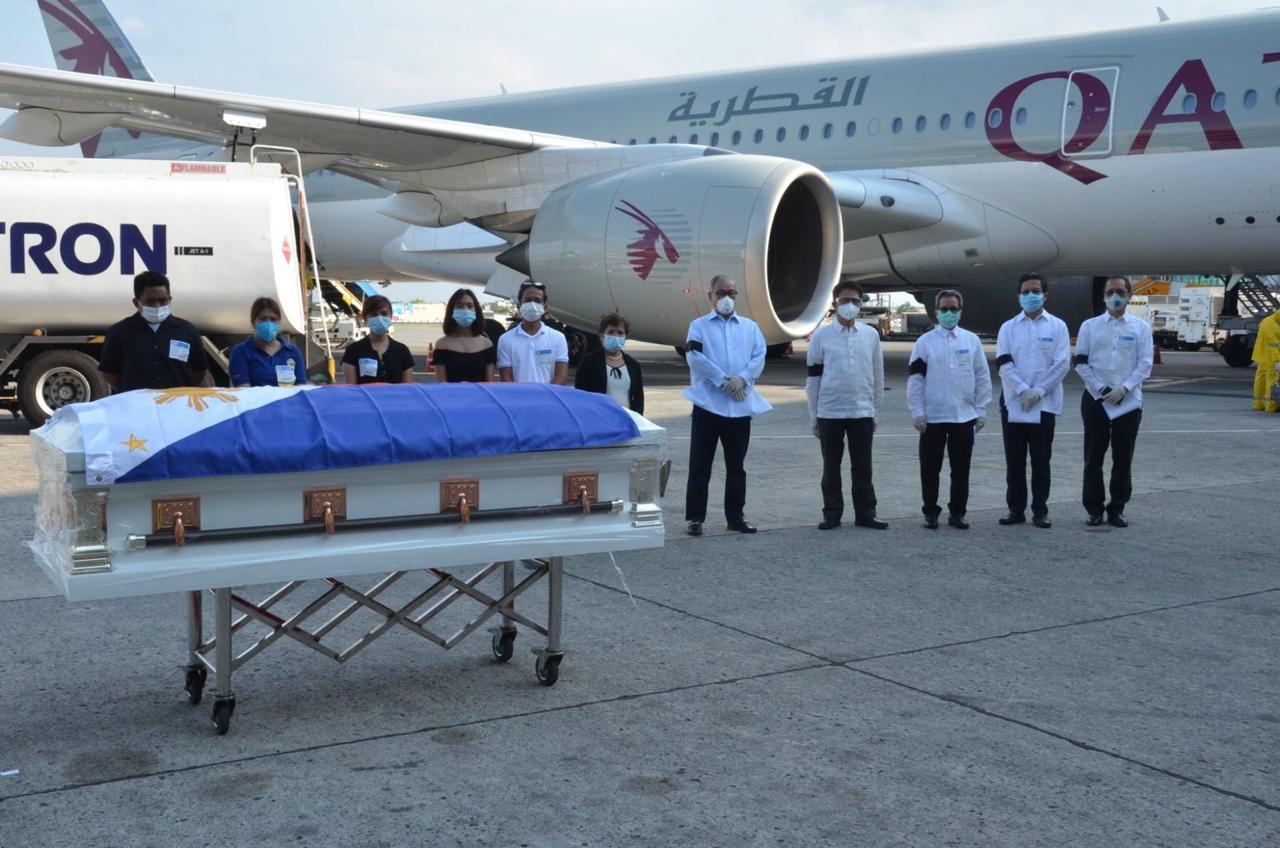 DFA officials led by Foreign Affairs Secretary Teodoro Locsin Jr. and the family of Philippine Ambassador to Lebanon Bernardita Catalla pay their last respects to the late diplomat whose remains arrived in Manila Wednesday. Photo courtesy of the Department of Foreign Affairs (DFA)

MANILA, Philippines — The remains of the Philippines’ top diplomat in Lebanon, who succumbed to coronavirus disease (COVID-19), arrived in Manila on Wednesday.

The Department of Foreign Affairs (DFA) said the plane carrying the remains of Philippine Ambassador to Lebanon Bernardita Catalla landed at the Ninoy Aquino International Airport.

“On this solemn afternoon, DFA officials led by Foreign Affairs Secretary (Teodoro Locsin Jr.) and (the next of kin) of the late Ambassador Catalla, as one family, pays their last respect to dearest Amb. ‘Bernie’,” the DFA said in a tweet.

Aircraft carrying the remains of late Philippine Ambassador to Lebanon “Bernie” Catalla safely lands at NAIA and is now being taxied to the parking bay where a solemn ceremony is prepared in her honor.@teddyboylocsin pic.twitter.com/wZrwfD9wP3

“The DFA may have lost a dedicated servant but her legacy continues!” it added.

Locsin also posted several photos on Twitter while he awaited the arrival of Catalla’s remains.

Waiting for the Ambassador pic.twitter.com/ieSL3rTl8Z

“Farewell Ma’am, flights of angels to thy rest,” he said in one tweet.

Farewell Ma’am, flights of angels to thy rest. pic.twitter.com/4B16geJUlP

DFA Assistance Secretary Eduardo Meñez told reporters that flags at all DFA offices in the Philippines and overseas will be flown at half-mast until Friday in honor of the late ambassador.

The foreign affairs chief earlier said he was putting forward a nomination for Gawad Mabini and Sikatuna for Catalla.