BALI, Indonesia — The 19th Association of Southeast Asian Nations Summit opened on Thursday morning on this resort island with all the leaders from the 10-member nation present, except for President Benigno Aquino III. 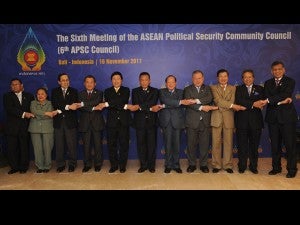 LOCKED IN. Foreign ministers and representatives of the Association of Southeast Asian Nations (Asean) join hands during a photo session at the opening ceremony of the Asean Political Security Community Council meeting in Nusa Dua, on Indonesia's resort island of Bali on Nov. 16, 2011. AFP

Aquino was tied up in Manila by a domestic concern over the attempt of former President Gloria Macapagal-Arroyo to fly to Singapore for medical treatment after getting clearance from the Supreme Court, and the subsequent move by the government to bar her from leaving.

He missed the welcome address of Indonesian President Susilo Bambang Yudhoyono, the traditional group photo of Southeast Asian leaders and the 9:50 a.m. plenary session at the Bali Nusa Dua Convention Center. Communications Secretary Ricky Carandang stood in for him at the photo session.

Aquino is scheduled to arrive here at around noon just in time to catch the Retreat Session at around 1:20 p.m., which will be followed by the concluding plenary session and the signing of the Bali Declaration on Asean Community in a Global Community of Nations.

Yudhoyono harped on the theme “Asean Community in a Global Community of Nations’’ in his address, expressing hope at the end of the summit, the leaders would be able to come up with a Bali Concord III that would “map out the road for Asean interaction with the global community.’’ With a report from AFP